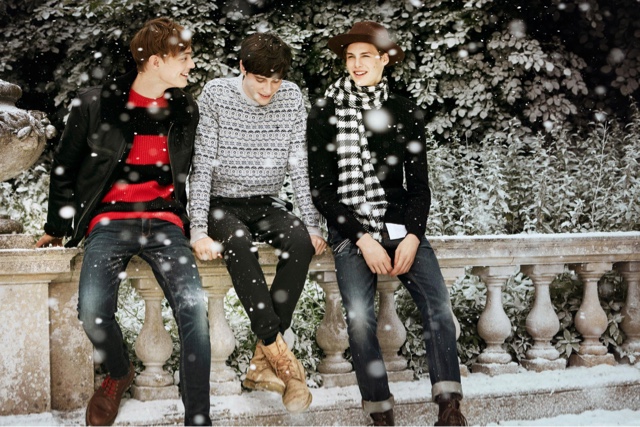 When I interviewed for my present job, they kept warning me about the harsh winters. When it snowed the first weekend after I moved, I thought, okay, I can handle this. It was so beautiful, and I got excited. We haven't had but one other small snow since. I came up here hoping for cute college boys and snow. The cute college guys, I see all the time. One thing about Vermont, there is lots of eye candy up here. My three disappointments up here: 1) the days are short and I literally work from sun up to sundown; the weather is kind of gray; and it's rained more than it's snowed. Where's my snow?
For those of you in New England and all points north who are going to say, "It's coming, and you'll be sick of it soon enough," I know it is and I will be wishing for it to go away in another month or so, but I'm from the South.  I'm from a climate that it's rarely even cold enough to wear an ugly sweater to an Ugly Sweater Christmas Party.  According to the weather forecast, I will fly back to Alabama next week and find thunderstorms and temperatures in the high 70s. For the past few weeks, we've barely gotten below freezing here in Vermont. While I may have frost on my windows in the morning, I haven't even seen frost in a week or so. I'm told, so far, this is one of the warmest winters Vermont has had in many years. Several people have blamed it on me for bringing Alabama weather up north. Haha. One friend, who's in northern Massachusetts, wrote me and said, "I think you brought your Alabama winter with you.....this sure isn’t typical for this time of year.  Some of our flowering bushes are budding...this is not a good thing!!!!!" I know this isn't typical. Where's my snow?
I've never really seen snow in my life.  We had a few times that it snowed in Alabama or Mississippi, when I lived there. I can count those on one hand.  Even then, it was mostly ice storms not really much snow. I still get excited about snow. It snowed some yesterday morning, but none of it even stuck to the ground. In fact at one point it was snowing on one side of a building but not on the other. I watched it for a little while, but then it got so sparse that it was hard to see it out of my office window, so I went back to working. I'm looking forward to seeing everything blanketed in white. I know the novelty will wear off.  It's like in the movie White Christmas, they head to Vermont expecting a ski resort, but there is no snow. Granted, I won't actually be up here for Christmas, and it might actually snow before I get back, but I'm still wondering: where's my snow?
Posted by Joe at 7:00 AM

Hey Joe... I can send you all the snow you want.. It's only Denver's 3rd snow storm of the season, but I'm sick of it already.. yesterday I got stuck on a side road and had to enlist the help of 5 burly denverites to help me push the Cruze back onto the roadway. We got over a foot of the crap and the city doesn't plow the side streets at all.
It is nice to know that there are still kind people out there who will lend a hand in times of adversity. That's the Christmas spirit!
Enjoy your 70 degree Alabama weather while you can.
Have a great day.

I have a friend who lives outside of Denver who emailed me last night moaning and groaning about the "Christmassy" snow all over the place. I think we have to assume eventually it will makes its way to the Northeast. I'm sure you will have your chance to "get sick of it." Just be glad you can easily drive to and from work. Of course living so close, if it gets too deep, you could always just get out and walk! Perhaps for now, focus on the Vermont eye candy. :)

The weather is upside down.

With «El Nino», the snow is more north or like in west USA.
Up here in Montreal, we have very mild temperatures and no snow as you. We are almost in the same state.

But, in Québec city and eastern part of the province and the maritimes, they had lot of snow.

So, don't be desperate, in January and February, you'll be cover with huge amongs of snow.

Mother Nature is sometime mixed up...

At any rate, sounds like you are getting back to your usual self. Some winters there is a ton of snow, some winters not so much. The one thing you can probably count on: when you want it, it won't happen. When you wish it would go away, surprise! Blizzard! Trust me, though. You will love the seasonal changes in New England overall.

All things come to him who waits!

A friend of mine who lives in Canada is currently in Costa Rico with his wife and two kids until January 6. He runs a bear hunting and ice fishing guide business 700 miles north of Quebec. Even as close to the North Pole as he is, he says that they have barely had any snow thus far.

We don't get a lot of snow here. So I'm looking forward to the snow as well!

We got the snow when I was in Alabama for the holidays.