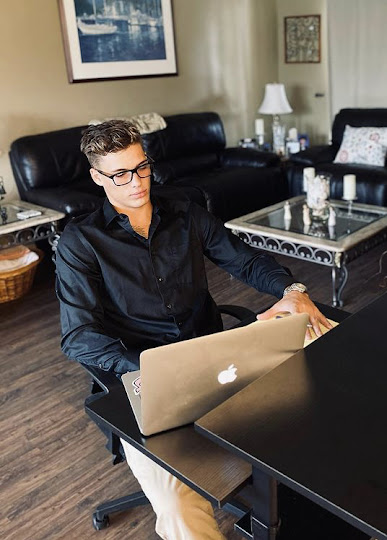 On Monday, I mentioned that I would be doing a program for the museum. Not all went according to plan. While everyone who provided feedback said that they loved the content and thought it was fascinating, there were some technical issues. I set up the program in the museum's entry area; however, the lighting was not as good as I had hoped it would be. I thought the natural lighting provided by the windows would provide nice lighting. Sadly, it was too bright outside, and the backlighting caused the picture to be poorer than it should have been. The room also has a concrete floor which caused an echo effect that I had not anticipated. It's an excellent place for receptions but not for recording programs live.

I had set up to do the program in a talk show discussion format with my program partner. Because we were doing this with a webcam and external microphone hooked up to a laptop, we could only have one microphone. I had an omnidirectional microphone that should have picked up both of our voices, but my program partner kept turning and looking at the camera instead of at me, causing his voice to go in and out throughout the program. Considering the format, it would have looked more natural if he had talked to me instead of the camera. However, he tends to like to show how much he knows and hear the sound of his own voice. I thought I could control this aspect of his personality, and while I did get some discussion of my own in, he did most of the talking.

I also had my director running the webinar's technical aspects because he assured me he could handle it and knew what he was doing. This was a fatal mistake. My director always thinks he knows what he is doing but rarely does. So, when it came time to share a clip during the program, he couldn't seem to get it to work. He shared the screen but couldn't get the audio to work. He also appears to have done something that caused the program we were using to record only the audio (along with the minute or so of silent screen sharing) but did not save the video. This is an issue because several people had contacted me before the webinar to tell me that they would be unable to attend live and wondered if it would be available afterward. I had assured them it would be, but now I have to contact them again and tell them that the video is not available.

Because the video is not available, I cannot watch it and learn from the mistakes made. On Monday, when I am back at the museum, my director and I will practice in another area of the museum to check lighting issues and sound quality and try to figure out what went wrong with the webinar's recording. We are doing all of this because we have the second part of this program at the end of the month. I want things to go better for the second one. I always feel terrible when things don’t go as I want them to go, and I can be a bit of a perfectionist when it comes to my public programs for the museum. It was the same when I used to be the drama club advisor at my old school. I needed everything to go smoothly, but unexpected things always happen.

With all of that said, I thoroughly enjoyed the talk show-style format and most people who watched it enjoyed it as well. My program partner will be joining me for the second part as well, and I have some ideas on how to manage him better. I let him determine that we would conduct the discussion freestyle, but I plan to have a more structured outline for the second one. A more structured program will hopefully allow for an equal discussion between the two of us. I will also tell him that he needs to look at me so that the microphone can pick up his voice better. I also plan to set up in our conference room to allow for a more controlled lighting and sound environment. We have all of our live programs there and have not experienced the echoing or lighting problems we experienced in the other space. I hope I can figure out how to correct the issues we had.

I'm sure it went well and you are being too hard on yourself, Joe. I know how it is being a perfectionist myself. You embody class and knowledge. I am sure the program was a joy for all who attended.

I have always been that way as well. I want things to be at about 90%. I can deal with the rest. I always keep in the back of my mind that I am representing the organization when I do anything public-facing. I want folks to walk away with that I am competent in what I am presenting. I make sure all technical aspects are working beforehand. I have set up training for 30 or more employees and have folks come in and speak. I make sure they know exactly what I want-content wise-and let them share their talent. I even worry about the in-house caterers. I make sure the class is comfortable and they are not wanting for anything. I say, if my name is on it, I am going to ride it all the way to the barn. I taught in the military for 2 years. And trust me we were on a schedule. Classes roll into each other and we all have to be done by the end of the day. You can't go over because you will be eating up others' time. Classes were lecture, didactics, hour in length to 4 hours and everything in between. I am a perfectionist but with a LITTLE give.