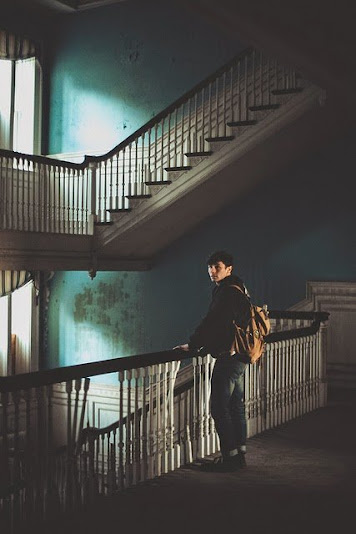 What do you do when you have a tour of the museum scheduled, and no one shows up? On Monday night, we had an after-hours event planned for students to take a special tour of the museum. We were trying to get some students into the museum since we are basically only open for them. All semester, we have had a grand total of two visitors. Our actual numbers look much better to the administration because every time we walk up front to open or close the museum or go to the restroom, it counts us as visitors, but we are the only ones who know that.

We organized a special event so students could register to come to the museum at night, have some food, and have a special tour. We ordered sliders (barbecue bacon cheddar, black and blue, and mushroom swiss burgers), chips, drinks, and brownies, all of which were advertised on the flyers. We set up a scheduling system for tours on Monday and Wednesday, with two tours each night. It was supposed to be a fun “Night at the Museum.”

However, only one student actually signed up. We should have canceled on Friday when we still could cancel the food, but my coworkers decided to hope that more students would sign up over the weekend. I tried to tell them that they wouldn’t, and we’d be wasting a lot of food, but they wouldn’t listen to me. So, Monday rolled around. My coworker, who was supposed to be helping with the tour, came down with food poisoning, and I was left to do the tour on my own, which is fine since we only expected one student. I knew there would be a lot of food, so I invited my neighbor and friend who works in the library to come.

As it turned out, the one student never showed. My friend came, and we had a dinner of sliders and chips. Then we boxed up all of the food and put it in the refrigerator, and then I gave her the tour. We had a fun time, just the two of us. Even though she works next door in the library and had been in the museum numerous times, she’s never really gotten a tour of the museum. Both of us talk a lot, so time got away from us. As I was finishing the tour, I looked at my watch and realized three hours had passed. We both had fun, though, so it wasn’t a problem. However, I am still disappointed that no students came. We canceled the tours for tonight. No one had signed up for them anyway.

Your colleagues should have listened to you. I can tell you from years of marketing programming events experience that unless their is a cost associated with an event (it can even be a nominal cost like $5) the typical drop-off is ~40-50% (there are exceptions of course).

The idea that there would / could be walk-ins is possible but that would only happen if there were supporting events happening around the museum that might bring in curious onlookers. As a general rule if you have fewer than 10-15 RSVPs you may want to propose that it be cancelled so in the future there are guidelines and people won't feel as if they need to make the gut call in the moment.

Sorry to read that you went through all that work and only your friend showed up but at least it sounds like the two of you had a nice meal and good time together. #SilverLinings

Joe, odd that students would turn down the prospect of free food - but outside of my experience. Is there any way that visits to the museum could be made part of any of the courses taught, that is, not compulsory but giving students who do visit an advantage over those who don't? Have a wonderful day, Roderick

BosGuy, they should have learned a long time ago to listen to me, LOL. I have been planning events for ten years, so I usually know what I am doing. They should know that by now. They were overly optimistic when I have learned through many disappointments to be more realistic. After we canceled the same event scheduled for Wednesday night, it turned out that 3 students had signed up for it. After having my tooth pulled, I was in no condition to give the tour and my coworkers claimed they couldn't for various reasons, so we told the students to reschedule a tour during the day. I doubt they will, and canceling when we had people registered gives us a bad name. I'll be glad when this pandemic is over and we are back to some semblance of normality.

Roderick, we often do have professors who make it part of the class to attend. However, since all classes have remained virtual this semester, we have had no classes scheduled for the museum. We actually do have several classes that require museum visits, but we just can't do it in the current circumstances.