Gallery of the Louvre 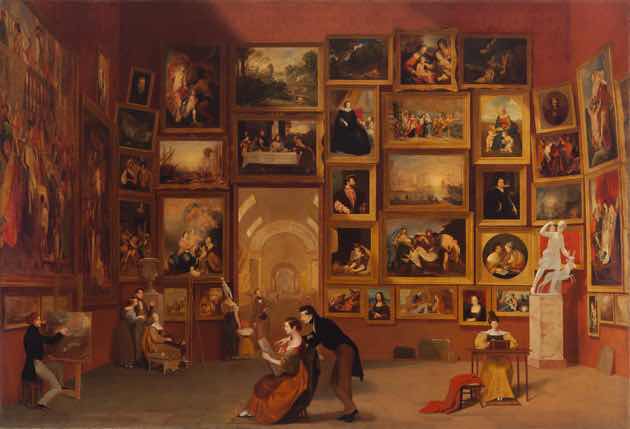 I know this is not the type of picture you expect on this blog, but it’s one that been on my mind lately as I’ve worked on our new exhibit. This painting will not be in our exhibit, but it is one that I came across while doing research for our exhibit. The painting above is titled Gallery of the Louvre and was painted by Samuel F. B. Morse between 1831–33. Morse  is better known today for his invention of the electromagnetic telegraph—and for "Morse" code—but he began his career as a painter and rose to the Presidency of the National Academy of Design in New York. Morse always wanted to be known as a great painter and never liked the fame he received for his invention. That could be because he got the idea from someone else, although the name escapes me at the moment.

The monumental Gallery of the Louvre (it measures  73.75 in. x 108 in.) is Morse’s masterwork. It is currently owned by the Terra Foundation for American Art as part of the Daniel J. Terra Collection. Gallery of the Louvre  was Morse's ambitious effort to capture images of the Louvre's great paintings and transport them across the ocean and throughout the country, to the republic's young cities and villages, so that art and culture could grow there.

Morse was one of the major historical figures I researched while I was writing my (never completed) dissertation. While this is an unusual post for me, I have had such a great time delving into my old research again to prepare for this exhibit, and I wanted to share some of it. It’s been a lot of work, and I’ve been incredibly busy. So, if my posts are not exactly substantial for the next couple of weeks, it’s because my creative endeavors have been focused elsewhere, and considering that I’m not a very creative person, there isn’t much creativity to spare at the moment, but I’ll continue to do my best. 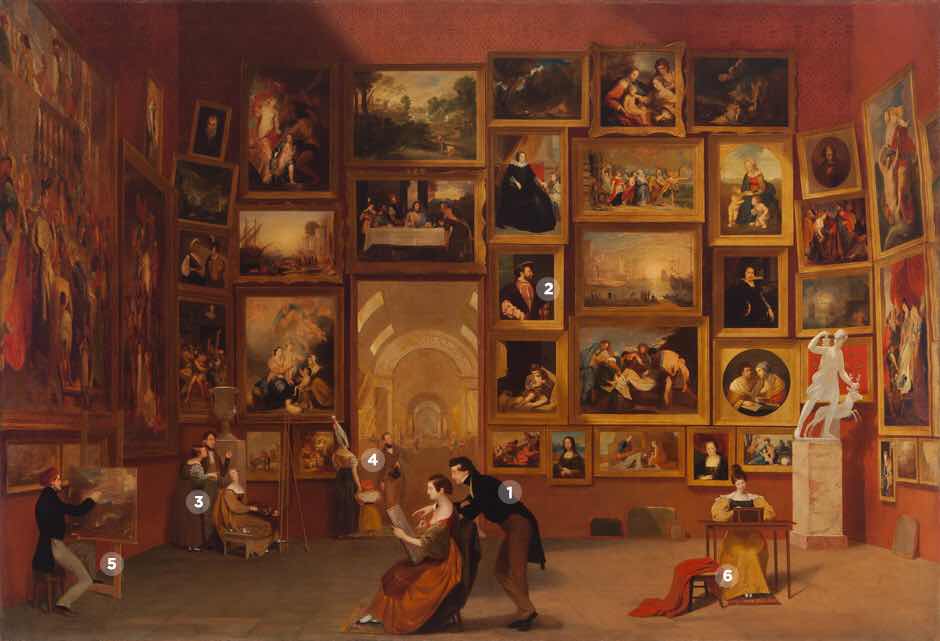 The people in Gallery of the Louvre are real people known to Morse, and the paintings within the painting are famous works from the Louvre. One of the people is Morse himself.

4)    American sculptor Horatio Greenough, who was probably most famous for the monstrosity that he sculpted of George Washington (which could be a whole other post in itself)

5)    Richard West Habersham, a young American portraitist from Georgia, who was Morse’s roommate in Paris

6)    Possibly a woman named Miss Joreter, who took lessons from Morse in the Louvre

To identify all tables: https://commons.wikimedia.org/wiki/File:Gallery_of_the_Louvre_1831-33_Samuel_Morse.jpg
The tables Of Morse shows the "salon Carré" : https://petitegalerie.louvre.fr/oeuvre/le-salon-carr%C3%A9-en-1861 and we see at the bottom the "Grande Gallerie" .