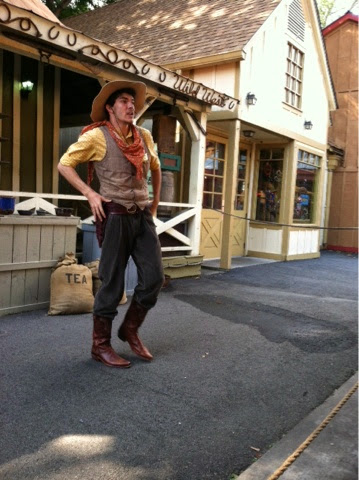 Six Flags Over Georgia has about six different themes to it.  There is the Wild West area (Lickskillet), the British area, the American area, the Bugs Bunny area, and the Gotham City area.  Most of them don't stand out a lot from one another, but the Bugs Bunny area is for small kids, the Gotham City had all Batman themed rides and venues, and the Wild West of course had a western theme.  Each area also plays different music to match the theme.  The Wild West played country music the whole time, and pretty good country music at that.
I enjoyed the Wild West part of the park, mainly because they had a cute little Wild West comedy show.  The humor was goofy and fun with a mixture of modern references with some older references too.  The sheriff pictured above was a cutie pie.  He had a great smile and a fun personality.  He put on a really good show along with his deputy and the bad guy.
When we first got there we decided we wouldn't do the Flash Pass which puts you at the head of the line, but it only took one long line until we decided otherwise.  It was $30 per person but more than worth it.  We got to ride a lot more rides that way.  My only complaint would be that the Flash Pass should work for the food lines also.  The venue where we had lunch was supposed to have a staff of 30 workers and they only had 7 working in there.  We stood in line for over an hour for a (halfway) descent cheeseburger.  If you are a rollercoaster junkie, then the Flash Pass is truly worth it.  We didn't ride many rollercoasters, but the Flash Pass did get us in and out quickly.
We were exhausted when we got back to the camper.  My feet were killing me.  Next time I walk that much, someone needs to be there to rub my feet.  Any volunteers?
Posted by Joe at 7:00 AM

Hope your feet have recovered! Enjoy spending time with your niece. :)

Ohh pick me pick me!! I give a mean foot rub that will have your eyes rolling and your mouth moaning (cue wicked grin)