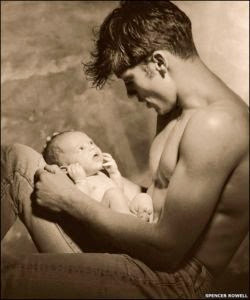 I'm going to be an uncle again today.  Sometime this afternoon, I'm going to have a brand new nephew.  My sister's c-section is scheduled for today. My niece is six years old and the joy of my life, and I'm so excited for the new joy to arrive.

Why should I marry? Straight people marry to have children, but I already have children! My niece and soon-to-be nephew are my children.  I love them dearly.

The picture above is L'enfant, better known as Man and Baby. It is a 1987 photographic poster depicting a shirtless male model (Adam Perry) holding a young baby. The image, photographed by Spencer Rowell, was published and distributed in the 1980s by British company Athena Posters. The image reportedly sold over 5 million copies, making it among the best-selling posters ever. The photograph was said to herald the "sensitive but sexy New Man" aesthetic.
Posted by Joe at 8:00 AM

I recently became an uncle again, and I know how delightful it is. Congratulations to you, your new nephew's parents and the rest of the family. May he grow up happy, healthy, safe and free in a world we have worked to make better for him and all children.

Congratulations to you and your family, Joe. :)

That's really awesome! I love being an uncle, and my nieces and nephews (while all adults now) are totally incredible people!

Congratulations, and I hope everything goes smoothly.

Congrats on the new arrival! Enjoy every minute while their little. And I love the picture. :)