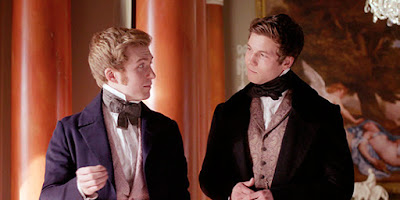 Have any of you been watching Victoria on PBS's Masterpiece? If you've seen the whole season, please don't give away any spoilers for those who are in the USA and haven't seen it. In Season 2 of Victoria, Prime Minister Robert Peel's Private Secretary Edward Drummond, played by Leo Suter and Chief Equerry to Queen Victoria, Alfred Paget, played by Jordan Waller are having flirtations. It's been quite adorable, the looks they give each other and the playful skinny dipping they did in Sunday night's episode. Of course homosexuality was a crime in Victorian Britain, and the 1840s is long before homosexuality was even a word or understood as it is today. It's been fun to watch Drummond and Paget though, especially Suter/Drummond who is absolutely gorgeous.
The problem is that the match-up is quite improbable. In real life the two would have never known each other and Drummond was at least 30 years Paget's senior. There is absolutely no evidence that either of the two were homosexual. If they were, we would never know because of the secretiveness of such relationships. However the improbability, it makes for good fantasy and lovely television. I can't wait to see how the drama unfolds for the rest of the season.

By the way, I did not watch the State of the Union Address last night. I can't stand to hear that asshole speak. Furthermore, I hate SOTU speeches. They are always written for pauses in the speech so that the president's party can go apeshit clapping. It's always ridiculous no matter which party is giving the speech, and given that this asshole can only lie, show his incompetence, and be misogynistic, it's just not worth my time.

Vitoria is really interesting and that «bro love» was told to me by a close friend of mine that is looking the season 2.

Personally, I'm viewing the season 1 in french on Radio Canada.
I just love it.

For the «45» State of the Union speech, that was such a big laugh.
He is putting one against the other and is still lying on facts.
The one our TV commentator in Canada pointed out is that it's not quite as easy to some immigrants to enter USA as much as «45» said. Even as a Canadian, it would be very hard to immigrate in USA.

His obsession on his damn WALL is becoming so ridiculous: NO WALLS can stop drugs or bad people to come to USA. Drug dealers are already using airports and the ocean like in Florida to import their shit.
Immigrants can always come in the same ways too.
NO WALL can stop them. LOL!

BTW, I saw and heard Joe Kennedy's speech and I was impressed. Not only is he a gorgeous ginger man but very intelligent and was speaking words of wisdom too.
HE could be president for sure and put more «youth» in the government that seems to be control by to many «oldies»...

Trump is outdated and his way of thinking is from the 19th century not to mention his way to treat women, black and latinos and also LGBT.

It's more than time you get that impeachment done.

What more could I've said Jeil said it for me. Yes, too the first part I actually went and searched out the blurred scene and I just don't understand. Have a great one.....

Hey Joe - I hope you got good news with your job and the budget situation!