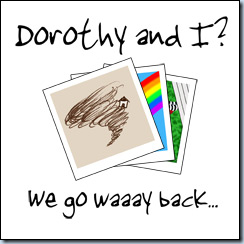 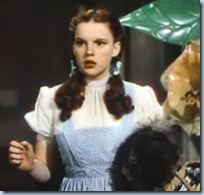 The Wizard of Oz had its first premiere screening August 12, 1939 and has been a beloved classic since that day. This movie has been a iconic movie for gay men since it was released. Other connections between Garland and LGBT people include the slang term friend of Dorothy, which likely derives from Garland's portrayal of Dorothy Gale in The Wizard of Oz and became a code phrase gay people used to identify each other. Dorothy's journey from Kansas to Oz "mirrored many gay men’s desires to escape the black-and-white limitations of small town life...for big, colorful cities filled with quirky, gender-bending characters who would welcome them." In the film, Dorothy immediately accepts those who are different, including the Cowardly Lion. The Lion identifies himself through song as a "sissy" and exhibits stereotypically "gay" (or at least effeminate) mannerisms. The Lion offers a coded example of Garland meeting and accepting a gay man without question.In the film, Dorothy is accepting of those who are different. For example the "gentle lion" living a lie, "I'm afraid there's no denyin', I'm just a dandy lion.” 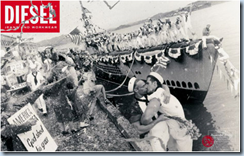 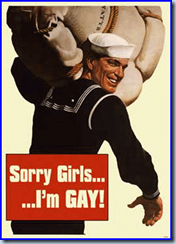 I find this little fact hilarious, though it is also quite tragic in terms of understanding the American military attitudes and understanding of gay men.  In the early 1980s, the Naval Investigative Service was investigating homosexuality in the Chicago area. Agents discovered that gay men sometimes referred to themselves as "friends of Dorothy." Unaware of the historical meaning of the term, the NIS believed that a woman named Dorothy was at the center of a massive ring of homosexual military personnel. The NIS launched an enormous hunt for Dorothy, hoping to find her and convince her to reveal the names of gay servicemembers.

Conventional wisdom is that Garland's death and funeral, in June 1969, helped inspire the Stonewall riots, the flashpoint of the modern Gay Liberation movement. However, some observers of the riots contend that most of those involved "were not the type to moon over Judy Garland records or attend her concerts at Carnegie Hall. They were more preoccupied with where they were going to sleep and where their next meal would come from." There was certainly an awareness and appreciation of Garland among Stonewall Inn patrons. Because the bar had no liquor license, it was passed off as a bottle club and patrons were required to sign in. Many used pseudonyms and "Judy Garland" was among the most popular. Regardless of the truth of the matter, the Garland/Stonewall connection has persisted and has been fictionalized in Stonewall, Nigel Finch's feature film about the events leading up to the riots. Lead character Bostonia is shown watching Garland's funeral on television and mourning, and later refusing to silence a jukebox playing a Garland song during a police raid, declaring "Judy stays."

The uprising was inspirited by a potent cocktail of pent-up rage (raids of gay bars were brutal and routine), overwrought emotions (hours earlier, thousands had wept at the funeral of Judy Garland) and drugs. As a 17-year-old cross-dresser was being led into the paddy wagon and got a shove from a cop, she fought back. [She] hit the cop and was so stoned, she didn't know what she was doing—or didn't care.

Garland's daughter Lorna Luft points to the connection with pride, saying that her mother was a "huge, huge advocate of human rights" and that Garland would have found the rioting appropriate.

Another connection is the rainbow flag, symbol of the LGBT communities which may have been inspired, in part, by Garland's song "Over the Rainbow." Garland's performance of this song has been described as "the sound of the closet," speaking to gay men whose image "they presented in their own public lives was often at odds with a truer sense of self that mainstream society would not condone." 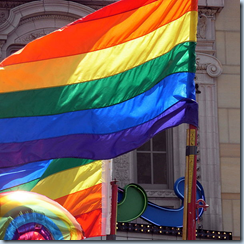 Another great article. I find fascinating the story of Lookin For Dorothy in Chicago...and, to be honest, I have never understood fully the "Judy"connection with the gay movement. Thanks for bringing it into focuse so clearly!

Interesting, to say the least. I always shake my head when I read of idiots who just can't "investigate" far enough to learn anything!

Great to see someone contextualize a stereotype and also, I feel, re-claim ownership of them.

You might be interested in The Gay Stage, my blog that discusses political gay theatre; it's roots and it's future.