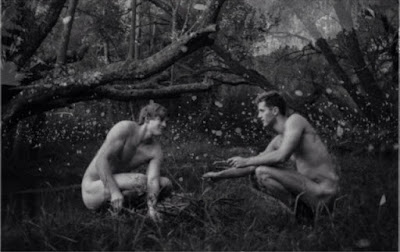 
June 23rd, evening of the first fireflies,
we’re walking in the cemetery down the road,
and I look up from my distracted study of whatever,


an unfocused gaze somewhere a few feet in front of my shoes,


and see that Ned has run on ahead
with the champagne plume of his tail held especially high,
his head erect,


which is often a sign that he has something he believes he is not allowed to have,


and in the gathering twilight (what is it that is gathered,
who is doing the harvesting?) I can make out that the long horizontal
between his lovely jaws is one of the four stakes planted on the slope


to indicate where the backhoe will dig a new grave.


Of course my impulse is to run after him, to replace the marker,
out of respect for the rule that we won’t desecrate the tombs,
or at least for those who knew the woman
whose name inks a placard in the rectangle claimed by the four poles


of vanishing—three poles now—and how it’s within their recollection,
their gathering, she’ll live. Evening of memory. Sparklamps in the grass.
I stand and watch him go in his wild figure eights,
I say, You run, darling, you tear up that hill.

Mark Doty's Fire to Fire: New and Selected Poems, won the National Book Award for Poetry in 2008. His eight books of poems include School of the Arts, Source, and My Alexandria. He has also published four volumes of nonfiction prose: Still Life with Oysters and Lemon, Heaven's Coast, Firebird and Dog Years, which was a New York Times bestseller in 2007. The Art of Description, a handbook for writers, appeared in 2011.
Doty’s poems have appeared in many magazines including The Atlantic Monthly, The London Review of Books, Ploughshares, Poetry, and The New Yorker. Widely anthologized, his poems appear in The Norton Anthology of Contemporary American Poetry and many other collections.
Doty's work has been honored by the National Book Critics Circle Award, the Los Angeles Times Book Prize, a Whiting Writers Award, two Lambda Literary Awards and the PEN/Martha Albrand Award for First Nonfiction. He is the only American poet to have received the T.S. Eliot Prize in the U.K., and has received fellowships from the Guggenheim, Ingram Merrill and Lila Wallace/Readers Digest Foundations, and from the National Endowment for the Arts.
Doty lives in New York City and on the east end of Long Island. He is Professor/Writer in Residence at Rutgers University in New Brunswick, New Jersey.
Two new books are forthcoming, both from W.W. Norton: What Is the Grass, a prose meditation on Walt Whitman and the ecstatic, and Deep Lane, a new volume of poems.
Doty is one of the foremost LGBT poets alive today.
PS Sorry for the late posting.  I thought I had scheduled it, but apparently I'd forgotten to do so.
Posted by Joe at 9:12 PM

Thank you for this! The very day I read it, I got an email notice of a reading Mark Doty would be giving the next afternoon. I went; he was great - and he read this very poem, so I wanted to be doubly sure to thank you.

I'm glad that it inspired you to go a reading by Mark Doty. I'd love to hear him speak.