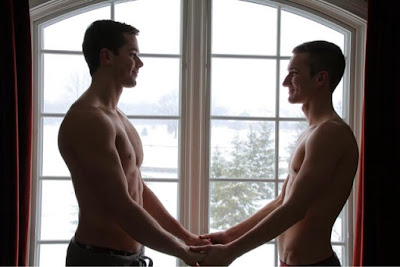 Altruism or selflessness is the principle or practice of concern for the welfare of others. It is a traditional virtue in many cultures and a core aspect of various religious traditions and secular worldviews, though the concept of "others" toward whom concern should be directed can vary among cultures and religions. Altruism or selflessness is the opposite of selfishness. The word was coined by the French philosopher Auguste Comte in French, as altruisme, for an antonym of egoism. He derived it from an Italian altrui, which in turn was derived from Latin alteri, meaning "other people" or "somebody else."
Posted by Joe at 8:00 AM

Cute photo of Mark and Ethan!

I think altruism is true Christlike love. It often involves helping strangers or doing things for the good of the many, not just for those you know and love. I've recently been the recipient of some altruistic benefuts from people who share their knowledge with others. I wonder to myself "who are these people who do stuff like this" and I realize they are just like me but look for small ways to help others. This blog falls in that category. It's been a help and inspiration for me several times over. Thank you Joe for your daily words of wisdom, inspiration and sharing of your life with others. ❤️