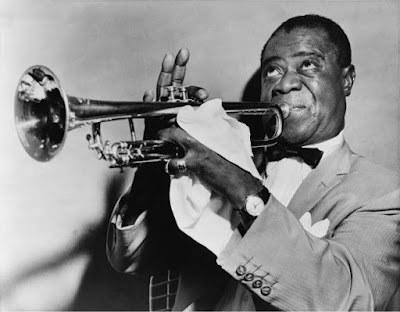 If  you are not familiar with the name Satchmo, it was the nickname for Louis Armstrong.  Louis had many nicknames as a child, all of which referred to the size of his mouth: “Gatemouth,” “Dippermouth,” and “Satchelmouth.” During a visit to Great Britain, Louis was met by Percy Brooks, the editor of Melody Maker magazine, who greeted him by saying, “Hello, Satchmo!” (He inadvertently contracted “Satchelmouth” into “Satchmo.”) Louis loved the new name and adopted it for his own. It provides the title to Louis’s second autobiography, is inscribed on at least two of Louis's trumpets, and is on Louis’s stationery.
Armstrong has always been a New Orleans legend and the airport is named Louis Armstrong International Airport.  Since I am heading there with my boyfriend today, I thought this made an appropriate poem.
P.S. I have a job interview this morning before we leave.  Hopefully, it will go well.  It's not an ideal job, but it would be something until I find something better.
Posted by Joe at 8:00 AM

Thanks for the tidbit about Louis Armstrong. And good luck with the interview! Sending (((Hugs))) and support. Enjoy your time with the wonderful boyfriend in New Orleans. :)

Every job interview that does not lead to a job offer is still practice for the next one. Hope things go well and may the good times roll for y'all in New Orleans!

Hope the interview went well. Enjoy your trip to New Orleans with your boyfriend. :)