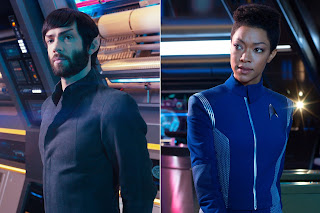 Let me first say, if you aren’t watching Star Trek: Discovery, your missing one of the best shows out there. I know not everyone can get Discovery. You either have to subscribe to CBS All Access in the United States or Netflix outside the US. It’s totally worth it though. While Fox has The Orville, which has the fun of the Star Trek movies, it’s not Star Trek. Some would say that Discovery’s darkness is not Star Trek either, I disagree. My favorite Star Trek series was Deep Space Nine, which was a bit dark in its storyline. Prior to Discovery, DS9 was the only Star Trek to fully cover the intricacies of war. DS9 brought us the Dominion War, whereas Discovery brought us the Klingon War. Also, Discovery has brought us in Season 2 back to the very origins of the Star Trek franchise with Captain Pike, Number One (though briefly), and Spock. It’s mind-blowingly good.

Now let’s look at the cast. Michael Burnham is played by Sonequa Martin-Green, who is by far one of the most intriguing characters ever created by Star Trek. Season 2 also brought in Captain Pike played by Anson Mount, and Spock played by Ethan Peck. Let me add here that Ethan Peck, Gregory Peck’s grandson, is the sexiest Spock ever. Saru played by Doug Jones is a fascinating character that continues to grow. Let’s not forget the remarkable Michelle Yeoh playing Philippa Georgiou. There are many characters that they are just fleshing out, especially on the bridge crew. Two of the most intriguing characters are Dr. Hugh Culber and Paul Stamets, Star Trek’s first ever gay couple, played by real life gay actors Wilson Cruz and Anthony Rapp.

The show is just remarkable. It’s unlike any Star Trek ever, and yet it is quintessentially Star Trek at the same time. The show is so exciting to watch that I have an adrenaline rush during each episode, and I can’t wait to watch the next episode. If you aren’t watching it, you can’t imagine what you’re missing.

I'm glad to know you are a fellow Star Trek fanI I agree Star Trek Discovery is a great show. I enjoyed season one but season two has been awesome. CBS All Access is worth the price for this show alone. I can't wait for this Thursday.

I'm a all time Trekkie since the beginning of the original serie in 1969 aired here in Canada.
I was 18yo and a fan of sci-fi and this Star Trek was outstanding at that time.

I'm a fan of Discovery but wasn't attracted to the first season seeing the previews and the release of some scenes and the spaceship, Discovery, that I still find not quite nice.

I got into the first season loving it the more I was getting into the episodes.
Now, this second season is AWESOME and this Spock premonition plot is breath taking.
For sure, the gay characters on the ship adds to the interest but, as usual, it's showed in very «all public» way.

I loved the movies done in the past years with Chris Pine and Zachary Quinto and bought the Blu-Rays. For sure, now with the new technologies in cinematography, those special effects are breath taking.

In the past ones, I enjoyed the Next Generation and Voyager but I wasn't really a great fan of Deep Space 9.

In Montreal, I can see Discovery on Space channel every Thursdays. I have Space on my «bouquet» of channel on my cable TV provider.

If you want to see my website about Star Trek, sci-fi and others, just visit me at http://distresscalls.tumblr.com/ .

I'm eager to see how this new saga will end.

OUPS!
I've just re-read your post and I think that it's not the first time the Star Trek world has aired a gay couple.

In the latest movies of Star Trek with Chris Pine, Sulu is presented as a gay guy and even is married with a son too. The scene of him joining his spouse and son on a base was brief but quite nice.

So maybe your remark was also because both gays in Discovery are played for the first time bt gay actors but gay characters weren't new to me.

JiEL, I wasn't considering the alternate universe of the Star Trek movies, so I did not include them with any thought about Sulu being gay in the latest movie. And there have been other instances of gay themes in Star Trek, such as William Riker and the non-female Soren, or when Jadzia Dax encounters Lenara Kahn, her ex-wife, and considers leaving with her. The thing is, that Stamets and Culber are the first time Star Trek has ever fleshed out any LGBT characters in any real sense. All the others were "sort ofs," with Riker's and Dax's characters, or in passing, with Sulu in the latest Star Trek movie. I think the Stamets/Culber partnership is quite unique and deserves to be singled out as the true first, especially in the Star Trek series and the prime timeline.

You're right in your analysist but to me, Star Trek world include the movies too.

But for sure, the way that relationship was showed is a «première» in prime time Star Trek series.
USA is slowly evolving toward real acceptance of some non conventional characters.
As black people in USA, gays are more and more main stream in TV shows but still there are pocket of resistance in the red necks states and extremist religious states.

All this is jeopardised by WHO is in the White House or in Congress and Senate.
To much religious extremists are in charge there.

So, Ethan's as attractive as his grandfather? I may have to subscribe.

I think more so, Dave.