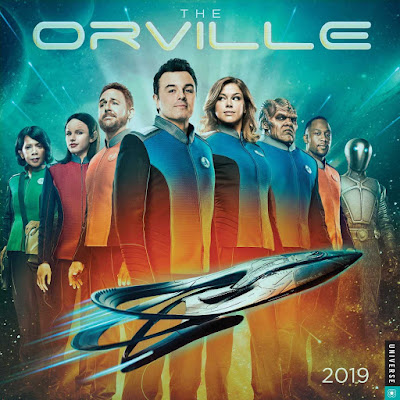 Monday, I talked about Star Trek: Discovery. Today, I want to discuss the show giving it a run for its money, except you can watch The Orville for free on Fox. The Orville is not the Star Trek spoof Fox originally advertised it to be. It’s much more. While the different Star Trek series did not contain a great deal of humor, many of the original Star Trek movies did. The Orville, created by and starring Seth McFarlane, has all the wonder of alien races and science fiction that Star Trek is known for, but also has the humor that was present in the movies. When The Orville premiered last year, many critics feared it would be Family Guy in space. That, it was not. Yes, some of the humor is a bit sophomoric, but the science fiction is first rate.

The Orville has the comedy and drama of the original Star Trek movies. While it does have the comedy, it also has true drama. When a same sex couple from a planet of all males has a daughter, there is serious issues to be considered. Then there was the ship of religious fanatics or a planet ruled by social media. These are issues that may not directly connect to the world today but the lessons in the episodes are real. The original Star Trek series dealt with real life issues head on as well. It broke down race barriers and even had a Russian on the bridge. In many ways, The Orville is what Star Trek tried to be, with a little humor added in.

So as excited as I am about Star Trek: Discovery, I am just as crazy about The Orville. If you’re a Star Trek fan, you don’t have to compare the two, though there are good comparisons in my opinion. The Orville is a show that can be enjoyed by science fiction fans in general. It’s a good show and if you’re aren’t watching it, you probably should be.
Posted by Joe at 6:00 AM

At first I was curious to see the first season of the Orville and was a bit suspicious of that Star Trek inspired humoristic serie.

So as many new sci-fi shows, I give them time to convince me and The Orville did get more and more interesting to me as the humour and stories were skillfully developing as the episodes went on.

It's refreshing to view those episodes that contain nice comic allusions and scenes as much as it contains real social issues. Also there are kind of special love stories too and that love hate relationship between the captain and the second who were once married.

Now, I never miss an episode.

Finally, the spirit of Gene Roddenberry is always up to date here were race, money, sex or religion are put aside to pur up front the tolerance and acceptance of the differences.

A lesson that many countries should take as example, even in USA, and that the UN should put more out front as a planetary main goal.