Where the Heart Beats 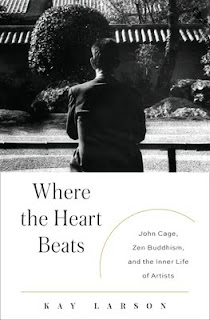 When I was first contacted about reviewing Kay Larson's book Where the Heart Beats: John Cage, Zen Buddhism and the Inner Life of Artists I knew very little about who John Cage was. So I did a little cursory research.  I found out that he was a musician, composer, artists, and a Buddhist homosexual. He sounded like an interesting and quirky individual, especially considering that his most famous composition is a piece titled 4'33".  It was composed in 1952 for any instrument (or combination of instruments), and the score instructs the performer not to play the instrument during the entire duration of the piece throughout the three movements (which, for the first performance, were divided into thirty seconds for the first, two minutes and twenty-three seconds for the second, and one minute and forty seconds for the third). The piece purports to consist of the sounds of the environment that the listeners hear while it is performed, although it is commonly perceived as "four minutes thirty-three seconds of silence". Needless to say, I was intrigued and was interested in reading the book.

At first you might think that Where the Heart Beats is another biography of John Cage. Though there is a strong biographical element in the book, it is more the biography of an idea, a study of the way Zen Buddhism came to be at the center of the working life of a group of artists, centered on John Cage. There is a lot of name dropping in the book of those of the Beat generation who Larson believes influenced Cage's music and Zen philosophy.  Central to this is Cage's attendance at the lectures of Daisetz Teitaro Suzuki in New York in the 1950's. Suzuki, a Zen Buddhist teacher, was an influential figure in the spreading of of Zen Buddhism to the West.  The description of Suzuki is intriguing, telling that he was not a Zen master, though still considered an expert on Zen.  He was not formally educated, but clearly a master of languages, having taught himself Sanskrit, Tibetan Sanskrit, and Pali, and fluent in Japanese, English, classical Chinese, and "several European languages."

Larson's book is divided into three parts, which attempt to follow the arc of revelation as Cage comes to discover Zen Buddhism and through it effect changes to his work.  The first part, Mountains are Mountains, is largely narrative and biographical though it is more of a collage than a single biography, with portraits of Cage and his colleagues, teachers and influences brought together into a single narrative.  The middle section, Mountains are no longer Mountains, covers just the years 1950-52.  The final section Mountains are again Mountains deals with the years afterwards, the after shock. But Larson is not really interested in Cage the man at this stage, more in the way his ideas are transmitted. She gives us a series of vignettes and snapshots as knowledge and influence move out in increasing circles from Cage himself.

From the very outset, Larson sees Zen in everything.  She became a convert of Zen Buddhism in 1994. Larson extensively quotes from Cage's own writings, putting these passages separately so that it seems as if Cage is himself contributing. But Cage is an unreliable observer of his own life, tending to re-shape events to suit the legend. Larson's writing style is often hard to understand. She waxes philosophically about the influences of Zen Buddhism, and her flowery writing style is one of my pet peeves.

This was a book that I wanted to like more than I was able to. I have to confess that I found it a little heavy going. There are so many people mentioned that it sometimes becomes rather difficult to keep up with who's who unless you are already familiar with all the names mentioned. Larson's goal was an interesting goal, but the outcome was not nearly as interesting as I hoped it would be. It demonstrates the centrality of Zen Buddhism to Cage's thinking. If you have a serious interest in the subject of John Cage and of Zen Buddhism, then I believe that you would enjoy the book.  Though I teach about Buddhism in my classes, Zen Buddhism is not a concept I am greatly familiar with, therefore I found myself lost at times reading this book.  Also, I have to admit that I might have found this book more interesting and an easier read had I not read it while sitting in a hospital's noisy ICU waiting room.

Thank you for being a part of the tour.