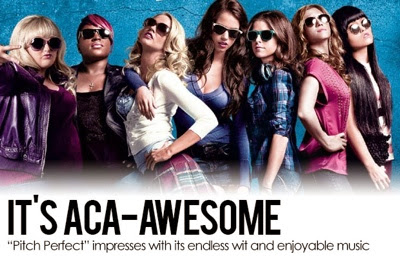 Pitch Perfect is an enjoyably snarky campus romp that’s both wildly nerdy and somewhat sexy, which makes it totally my kind of movie. Set in the unlikely world of a cappella singing, this snappy, smart-mouthed comedy with tons of great one-liners and fantastic music, offers choice opportunities for a bunch of young performers to pop out of the crowd while playing game characters searching for modes of self-expression. Girls, gays and music fanatics represent the core audience, but the good times also should go down easily with a wider in-the-know crowd.  Think Glee in college.  And to add a little eye candy for the gay crowd there are plenty of sexy guys in this movie along with a few dorky types.

A too-cool-for-you smarminess sheathes the cutthroat competitiveness at Barden U., where, on club recruiting day, The Bellas, an all-female a cappella group, urgently need new blood to have a chance of beating male rivals The Treblemakers, who prevailed in the national finals the previous spring.

Debuting feature director Jason Moore, best known for having staged Avenue Q on Broadway, sets a quick but not frantic pace and keeps it there; one easily could believe he goosed the actors before every scene, so alert are they to everything going on. The unusually attractive cast, which is consistently filled with performers well over college age, is fun to watch. Among the Bellas, Anna Kendrick's Beca appealingly blossoms from wary outsider to the one everyone counts upon; Anna Camp's Aubrey seemingly would rather die than take off her self-imposed straitjacket; Brittany Snow's Chloe receives some of the knocks she needs to begin straightening herself out; Rebel Wilson's Fat Amy has a hilarious arsenal of quips, looks and moves; Ester Dean's Cynthia Rose shows the kind of right stuff you always want on your side; and, for maximal eye candy, Alexis Knapp's Stacie is always towering voluptuously and informing everyone how much sex she has. You get the feeling all of these talents will be heard from more decisively in the near future.

Scarcely five minutes of screen time goes by without music, be it in rehearsals, impromptu challenges or regional competitions leading up to the national finals at Lincoln Center in New York, and the bulging soundtrack calls upon oldies, newbies and everything in between to be rendered vocally without instrumentation, with normally arresting results unless it’s supposed to sound bad. The choreography is similarly sharp without tipping over into the outlandishly professional.

As I was reading about this movie, I came across a review from a "religious" site called Dove Family Friendly Movies that reviewed it as "Not Recommended for Families."  Well, as Aubrey says to one character, "It's time to get your head out of your ass, because it's not a hat."  Yes, there is some language but nothing that's not regularly on television.  Dove Family Friendly Movies was too funny not to read their review.  At one point they state, "The music is really quite good and except for one line uttered by a lesbian, 'I’ll make you my queen,' the soundtrack might be considered family friendly."  To top off their stupidity, this is what they said about nudity in the film, "close-up of boy in a speedo swimsuit; cleveage [sic]; two girls and a guy talking while naked in the shower (nothing shown on screen); girl with see-thru t-shirt; girl rips open blouse during performance."  The thing is there is absolutely no nudity in the whole movie, and "close-up of boy in a speedo swimsuit" just made me want to see it more.

A friend had sent the movie when he found out that HRH had passed.  He said that I needed something that would help cheer me up.  After watching this movie last night, I can honestly say it worked.  I haven't been in this good of a mood in nearly two weeks.  Even before Victoria got sick, I had suffered from a three day migraine.  So this movie was just what I needed, and I laughed a lot, something I haven't done in a while.  One of the ladies at school told me that she missed my smile.  She understand though why I have been sad.

If you have not seen Pitch Perfect than you really should.  It's a fun and wonderful movie.  I plan to watch this movie over and over again. This movie is perfect for putting me in a good mood, and I recommend anyone who has not seen it to run to the store and buy it.
Posted by Joe at 8:00 AM

OK, so I originally skipped this movie thinking it too smallchy, but now that you recommend it .... SEE how you are? Thanks friend and you remain in my thoughts & prayers ........

Glad your friend found the pitch perfect thing to perk you up.

This movie sounds great. I am going to watch it tonight "on demand." Thanks for the rec, Joe, and I'm so happy it lifted your spirits some.

Seriously this is one of my favorites movies. It fun, musical and hilariously scripted. I'm glad it cheered you up - your friend must have known this was exactly what you needed.
Have an awesome day
Ethan

I agree with EthanJM! My husband thinks I'm nuts, but I love that movie!