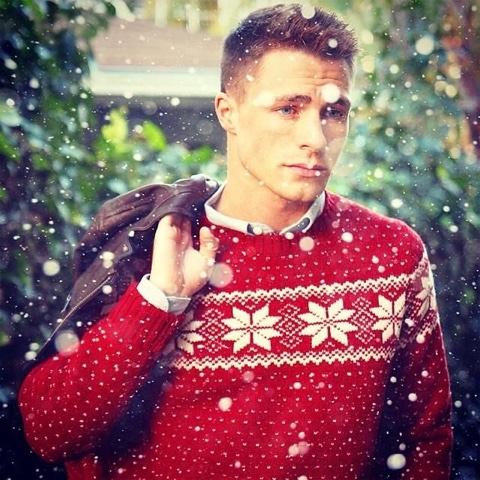 While I was in Alabama for the holidays, winter finally hit Vermont. I'm going to admit something dumb. I can be a real flake at times. When I was landing in Manchester Saturday night, I looked out the window and thought, I didn't know Manchester was near the beach, but that's the prettiest white sand I've seen besides the gulf coasts if Alabama and Florida. Then it downed on me, that's not sand that's snow. Everything was blanketed in, not really snow but ice. As I drove home yesterday, the ice turned more to snow as I drove northwest back toward home. When I left Vermont, the temperature had been in the upper 30s, low 40s. Today, the high is expected to be 9 and the low is expected to be -5. (All temps are in Fahrenheit, of course. I never could convert to Celsius.) I will finally get to use my real winter gear today and tomorrow. Then the temperature will rise back into the 30s.

In other cool news (pun intended), "Teen Wolf"/"Arrow" star and one of my favorite crushes Colton Haynes appeared to open up about his sexuality in a coy social media post some media outlets have deemed his public coming out.

On Tumblr, a user wrote of the 27-year-old actor, "When I found out Colton Haynes had a secret gay past, I got so excited even though i know it makes absolutely no difference in my life."

On his personal Tumblr, Haynes quickly responded to the remark:

Was it a secret? Let’s all just enjoy life & have no regrets :)

Although the "Arrow" actor has thus far remained tight-lipped about the meaning behind his remark, a number of publications have interpreted the post as him publicly acknowledging that he's gay. For anyone who has followed Haynes career, this is no big surprise.

The actor's sexuality has been the subject of heavy media speculation for some time. The "secret gay past" that the Tumblr user was referencing could refer to a March 2006 photo series that ran in the now-defunct publication XY which purportedly showed Haynes kissing another man. I first noticed Haynes when he appeared in that magazine, though I dint know who he was at the time. Once I found out who he was, I have followed his career.

In an interview discussing the turning point in his career as an actor, Haynes describes it as “The day I decided to trust my own instincts and not mask my sometimes big personality. I’ve had a bunch of agents and managers over the years who controlled my every move and didn’t necessarily care about me as a person.” When I read this, the actions of his agents and managers in the past make more sense. They'd sued or threatened lawsuits to have the pictures from XY Magazine removed from websites. Of course it didn't work and they didn't get all of them removed. For years one of the major search terms that brought people to my blog was "Colton Haynes gay," that is because of a post I did several years ago about gay college,life, in which I'd used some of those XY pictures.

Haynes, however, has been much less secretive than he was in his time with "Teen Wolf." For the past two halloweens, he has dressed in Disney drag: Princess Fiona and Ursula. He's also made no secret in the last few years that he has a gay brother, Joshua, or that he has a close friendship with out actor John Barrowman. In 2013, Haynes was spotted in an airport holding hands with his "Arrow" co-star, Barrowman. Barrowman, who married husband Scott Gill that same year, laughed off the incident in a Greg In Hollywood interview. "He’s a great kid and we have a great time and he’s becoming a really good friend, which I think is really nice," Barrowman said of Haynes.

I've been hoping for years that Haynes would come out. His sexuality has been one of the worst kept secrets in Hollywood. Congrats, Colton! Now, if you'd just marry me.

My first time here! I enjoy several of your posts! certainly I will turn an assiduous reader!
happy new year!

Your post brought back memories. Several years ago when I was flying into Chicago,some business men on the flight were talking about all the clouds outside. The clouds were actually the snow storm that had hit the area that morning. Thank you for making me smile today.

Dina in Maryland (and still waiting for winter)

I'm very much ready for some snow. I love it and it doesn't feel like winter without it. We don't tend to get much here unfortunately so I have to enjoy every little bit we do get. Glad you made it home safely.

Colton Haynes is quite yummy. He sounds like he handled that very classy. It kills me that people are always trying to "out" people. Glad he's happy being himself. :)