An Italian art historian claims some of the images depicted in Michelangelo's "Last Judgment"—the fresco on the wall behind the altar of the Sistine Chapel—were inspired by acts the artist witnessed in homosexual bathhouses. Let's take a closer look, shall we?

Elena Lazzarini, the author of a new book about the work, explains, "The virile male bodies are inspired by the physiology of laborers engaged in physical exertion, with taut muscles, strenuous exertion and pain etched into the expression on their faces." (That is the most polite description of man-on-man intercourse we've ever heard.) Lazzarini goes on to say that Michelangelo drew inspiration from his fellow gays and the muscular prostitutes who regularly worked in the saunas.

The colossal work, which took the Renaissance master four years to paint and graces the Sistine Chapel in Vatican City, is a depiction of judgment day, with the virtuous being called to heaven and sinners being dragged into hell. The full work was scoured for the queerest images, and boy were some doozies found.

Here are a bunch of naked guys walking somewhere together and checking out the hot stud just out of view. (It's hunky Jesus in this case.) Where do you think they're going? Probably to get more lube.

One guy on his back with his legs in the air is getting reamed with a giant pole by a line of gorgeous muscle studs. Nope, nothing gay happening here.

Speaking of pass-around party bottoms, here is a gentleman bending over in a receptive position with another man's hand—well, we'll leave that to your imagination. But the line of boys behind him sure have a good view.

Someone is being dragged to hell by his testicles. This doesn't look so much like torture, but more like your average Saturday night at a leather bar.

A group of men blowing. Yup, that's what this is. They're also showing off some sort of book. We imagine they are the world's last remaining copies of Honcho magazine. For bonus points, check out the dude who just scored himself a bottom in the lower right quadrant.

Those angels and demons are so mean. They're obviously breaking up a three-way between these two naked guys and their robed friend. This must be hell, because group sex is definitely allowed in heaven. 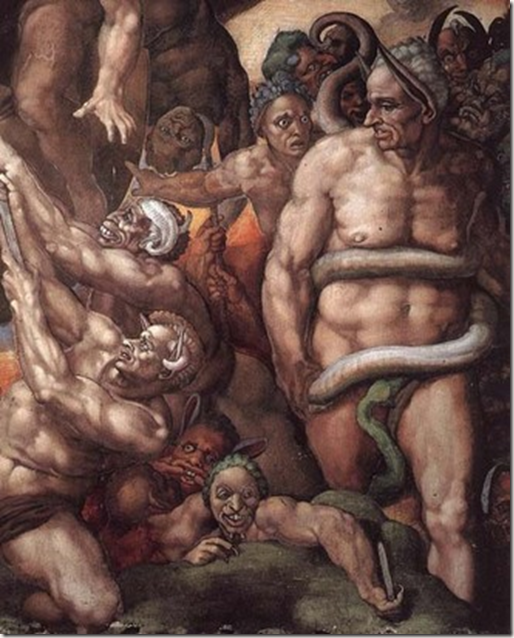 And one more bonus image to use your imagination on.

The Last Judgment is a fresco by Michelangelo on the altar wall of the Sistine Chapel in Vatican City. It took four years to complete and was executed from 1537 to 1541. Michelangelo began working on it three decades after having finished the ceiling of the chapel. 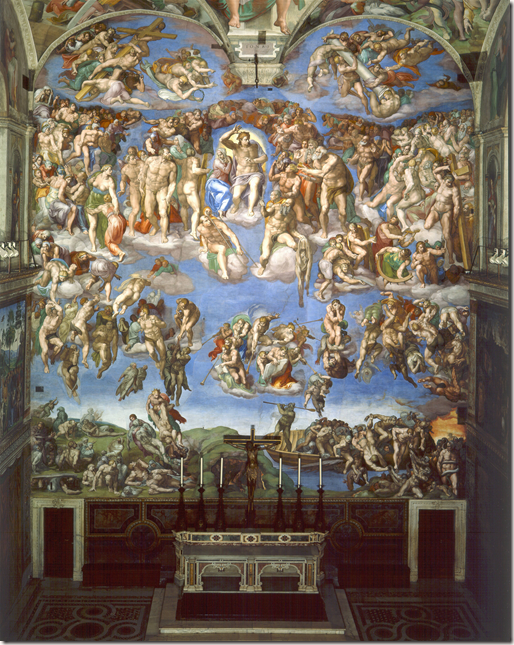 The work is massive and spans the entire wall behind the altar of the Sistine Chapel. It is a depiction of the second coming of Christ and the apocalypse. The souls of humans rise and descend to their fates, as judged by Christ surrounded by his saints.

The Last Judgment was an object of a heavy dispute between Cardinal Carafa and Michelangelo: the artist was accused of immorality and intolerable obscenity, having depicted naked figures, with genitals in evidence, inside the most important church of Christianity, so a censorship campaign (known as the "Fig-Leaf Campaign") was organized by Carafa and Monsignor Sernini (Mantua's ambassador) to remove the frescoes. When the Pope's own Master of Ceremonies, Biagio da Cesena, said "it was mostly disgraceful that in so sacred a place there should have been depicted all those nude figures, exposing themselves so shamefully," and that it was no work for a papal chapel but rather "for the public baths and taverns," Michelangelo worked Cesena's face into the scene as Minos, judge of the underworld (far bottom-right corner of the painting) with Donkey ears {i.e.foolishness} while his nudity is covered by a coiled snake. It is said that when Cesena complained to the Pope, the pontiff joked that his jurisdiction did not extend to hell, so the portrait would have to remain.
The genitalia in the fresco were covered 24 years later (when the Council of Trent condemned nudity in religious art) by the artist Daniele da Volterra, whom history remembers by the derogatory nickname "Il Braghettone" ("the breeches-painter"). In the painting, Michelangelo does a self portrait depicting himself as St. Bartholomew after he had been flayed (skinned alive). This is reflective of the feelings of contempt Michelangelo had for being commissioned to paint "The Last Judgement". The figure of St. Bartholomew depicts the satirist and erotic writer Pietro Aretino who had tried to extort a valuable drawing from Michelangelo. He holds the painter's flayed skin as a symbol of attempted victimization.

Much of this post was borrowed from Gawker.com and was originally written by Brian Moylan.

After the jump you can see QueerClick.com’s very irreverent take on this masterpiece by Michelangelo. 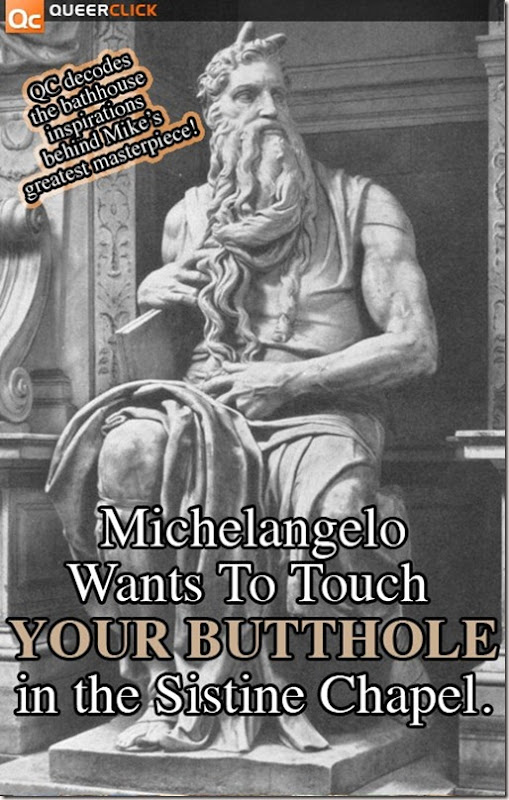 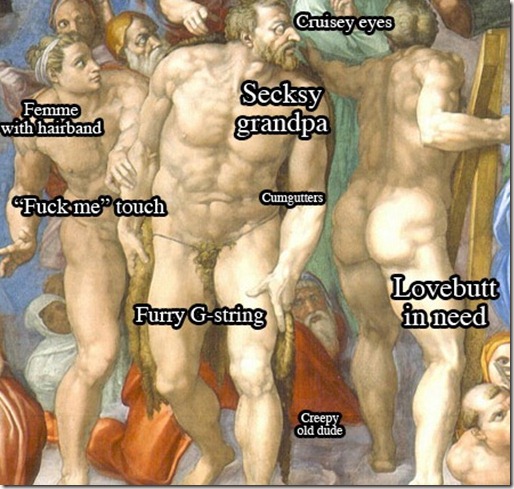 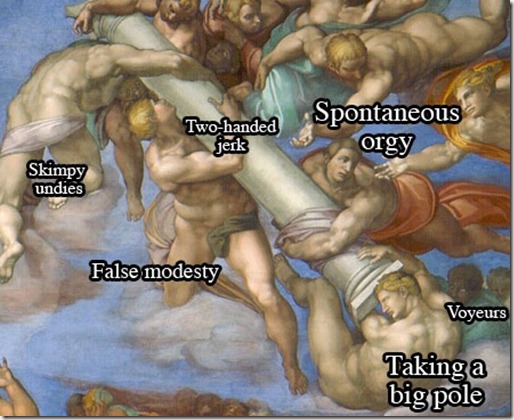 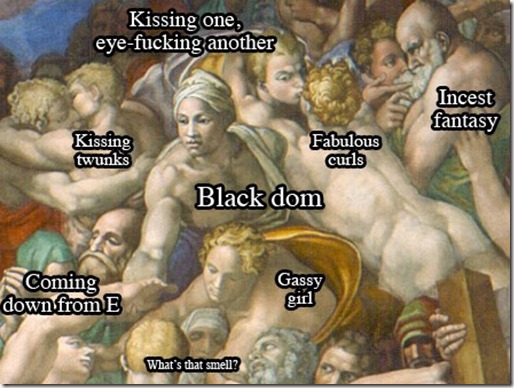 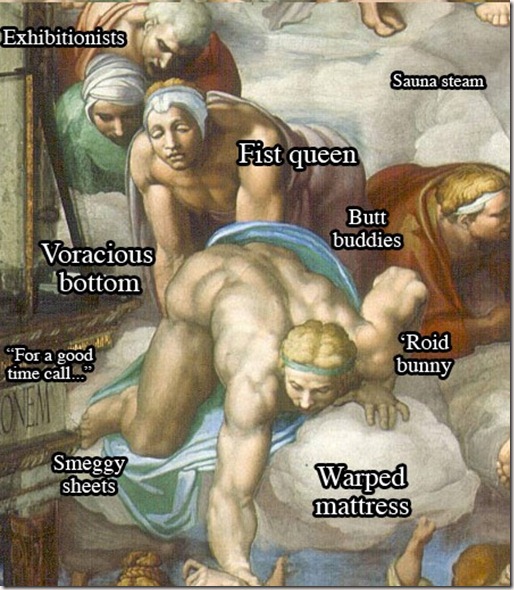 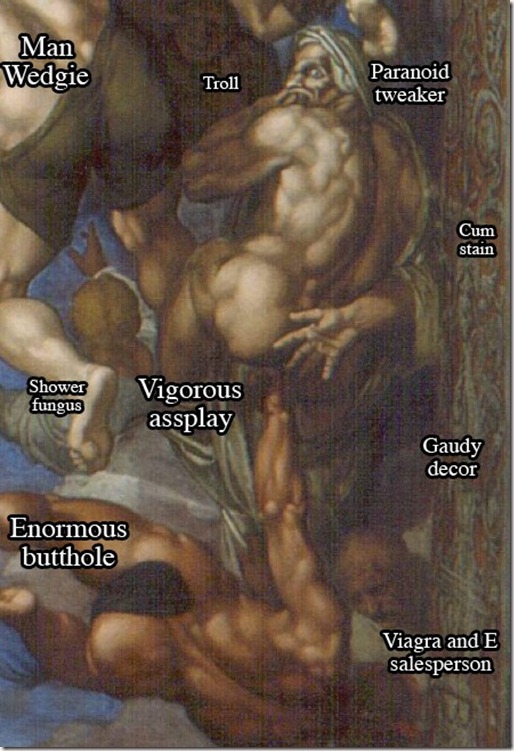 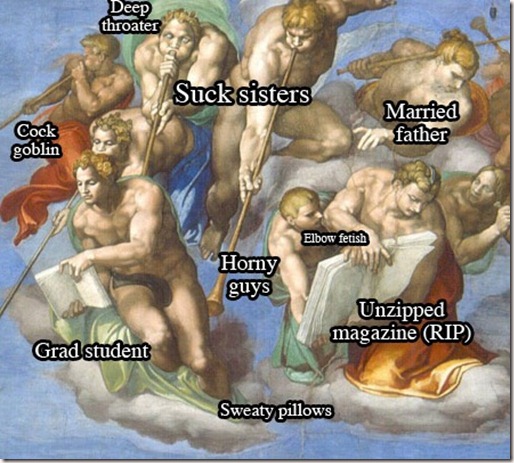 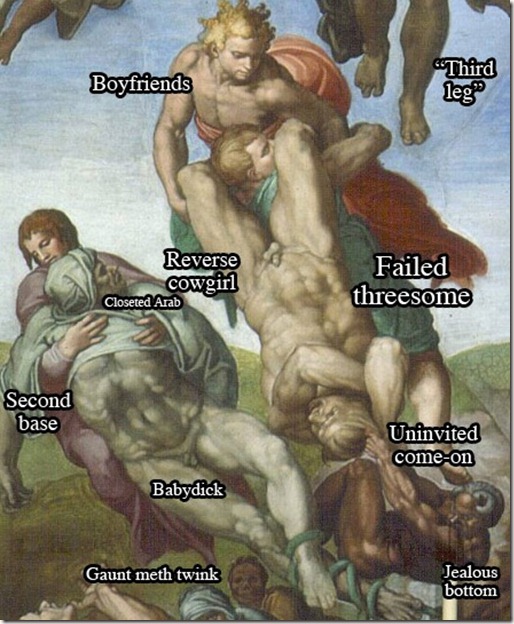 Now, Joe, this is the best art history lesson ever! Talk about artistic license!!! LOL!!!

I've been to the Sistine Chapel and now I want to go back, Uncutplus. I have a whole new perspective, LOL. The most I knew about "The Last Judgment" was that Michelangelo had used political friends and enemies at the time in his depictions. His face is actually in the face of the saint who was skinned alive and holding his own skin.