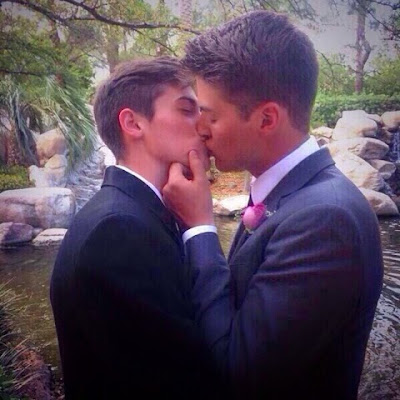 Obergefell v. Hodges presented a lot of back and forth on the issue of same sex marriage at the Supreme Court on Tuesday, which was deeply divided as it heard oral arguments in the case.  Obergefell v. Hodges is a case which is likely to go down in the history books alongside other landmark civil rights cases.  This one centers on two questions: first, whether there is a constitutional right to gay marriage, and second, if not, whether states that have bans on gay marriage have to recognize gay marriages performed in other states where it’s legal.  The first question seems to be the most important, and I have tired to sum up the SCOTUS proceedings as succinctly as possible, but it turned out to be way too long.  The best summary I've read is from a New York Times article by Adam Liptak.  I read over numerous articles about the proceedings, and the one by Liptak seemed to be one of the best. So if you want to read about the arguments presented and the questions asked by the justices, then click on the link for the Liptak article.
Let's face it, most of the arguments against same sex marriage are ridiculous.  Opponents argue that same sex marriage:  would destroy the institution of marriage, Marriage is for procreation, polygamy would follow, voters should be able to decide, tradition and history, and religious concerns.  Those six are the arguments that opponents seem to want to argue most.  So let's look at these one at a time.  Same-sex marriage will have no effect on opposite-sex marriage.  Quite simply, it will not affect a heterosexual marriage in any way.  Also, if marriage is for procreation only, then barren couples should have their marriages invalidated, no one should be able to marry a post-menopausal woman, and couples who do not want children should not be allowed to marry.  However, opponents of same-sex marriage still say that LGBT couples should not be allowed to marry because the marriage cannot produce children.  What is equal about that?  As for polygamy, one of the arguments is for religious freedom, but we deny those whose religion allows polygamy to practice it.  So why not allow polygamy?  I want only one man in my life, but if you're Islamic or Mormon, you should have the right to have multiple wives, as long as one woman can also have multiple husbands.  Furthermore, if voters were able to decide all issues about equality, the American South would still be segregated, interracial marriage would still be illegal, and sodomy would still be illegal (and for those who would think that it should still be illegal [none of my readers I hope] then please remember that most sodomy laws included any sex that was not in the missionary position).  The American voters cannot be trusted with protecting the rights of minorities, which is why we have the 14th Amendment.  As for tradition and history, if we are speaking strictly of American history, numerous Native American tribes allowed not only for transgender but also for same-sex marriage.  It is only the introduction of Christianity that those tribals laws changed.  Which brings me to my last point, America's Founding Fathers believed in separation of church and state, therefore religious need not apply.
Preliminary indications are that the Court is ready to rule 5-4 in favor of marriage equality. However, while even those opposed to marriage equality concede as much, a win — especially one in which marriage equality is affirmed as a civil rights issue — is no guarantee.  The Supreme Court will release its ruling on Obergefell v. Hodges in June. While there’s reason to be optimistic, the oral arguments did not provide a clear win for the LGBT community, and even if marriage equality is affirmed, it could be affirmed in narrow terms that aren’t transferrable to other LGBT cases involving discrimination unrelated to marriage.  My greatest fear is that the Supreme Court will issue a very narrow decision in favor of same-sex marriage and those states who allow same-sex marriage will be allowed to continue and other states will be forced to wait, therefore, having two Americas, one with LGBT Americans having marriage equality in some states and others states where LGBT Americans will be deemed second class citizens.  I personally am hoping for a broad opinion written by Ginsberg.

It reminds me about those times when, IN USA, a black couldn't marry a white guy or woman.

Must admit that all YOUR fights about «gay unions» (for us here, marriage is used in a civil and religious «union» which is less complicated) are very very very complicated in regard of USA constitution and each states laws.

Why not simplify those RIGHTS like UNIVERSAL RIGHTS of HUMAN LIBERTIES.

As I always told you, as long as USA will be «influenced» by religious lobbyists, and that your moto: "In God We Trust." USA will deny any revendications that SEEMS going against GOD LAWS or those laws that are putting forward by those bigots and religious freeks....

Just regarding that silly amendement about the right to possess guns is so out of sense because was written in the farwest times where there were no real protection and when there were no semi automatic deadly weapons.
It makes USA today a real dangerous place to live.

To me and many Canadians, USA religious lobbly and way of life and believes are no more acceptable than those in many Islamic countries: death penalty in some USA state is as barbaric as those in Islam countries.

Not to mention how they treat homosexuals...

Finally, when your judges take the «procreation» as a reason to only accept straight marriage they don't seem to be logical because even if some couples cannot have children, they still have the RIGHT to marry.
Example of OLDIES getting married even if they'll never have children... (Illogical just for that.)

Seperate the word «marriage» which is source of conflict by religious people with «civil union» for ALL types of «official couples boundings with love».

I'm so lucky to live in Canada and mainly Montreal....

Excellent summation article. The supporters of the ban always make the same knee-jerk comments. It is frustrating because their so-called opinions don't make sense. Your well-thought out rebuttal remarks showed that very clearly. :)

I have not heard one word that would imply in any way that someone's same sex marriage would damage or threaten someone else's opposite sex marriage.

With the divorce rate for opposite sex marriage at close to 50%, those in "traditional" marriages would be far better off using their time and energy to take care of their own business, rather than using it to demean the loving relationships of others.

The whole matter of not being allowed to marry due to the couple's inability to procreate is ridiculous for the reasons you have already stated. Many same sex couple want to adopt children and have families, but straight homophobes do not want them to be able to adopt. That is a classic catch 22 agrument, saying that same sex marriages should not be allowed because they can't have children, but then have laws in the books that prevent same sex couples from having children. So stupid and so hypocritical!

Your issues on gay adopting children or having a «biological woman to carry a child for you» are no more a problem here in Montréal or Canada.

I know many gay couples that have children.
We even have a famous actors gay couple that made the front pages of news papers and magasines about their «twin girls» they had with the aid of a «mother» feritilzed with the sperm of one of the two....

Must say that we are way far from your bigots and hypocrites in USA...

Hope USA could get over all that non sense soon...

Well thought out post Joe. I will never understand how people can justify bigotry and discrimination. Marriage should be about love not what's between your legs. I will always vote for equality whether that's popular or not. But hopefully with time all states will have equal rights for marriage.

My bet is that the CJ, Roberts, will vote with the majority on a VERY narrow ruling. This would mean that he gets to write the opinion or choose who does. Seriously doubt that RBG will be the author.