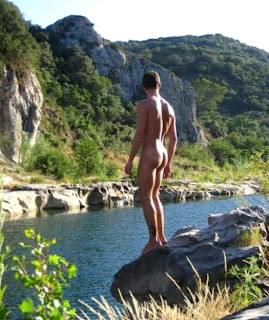 No. 35, Gay or Bi Shakespeare (or was deVere his ghost writer?) Shakespeare is in love with a younger man, but is lamenting his loss of what had been a loving relationship.

Full many a glorious morning have I seen

Flatter the mountain-tops with sovereign eye,

With ugly rack on his celestial face,

And from the forlorn world his visage hide,

Stealing unseen to west with this disgrace:

Even so my sun one early morn did shine

With all triumphant splendor on my brow

But out, alack! he was but one hour mine,

The region cloud hath mask'd him from me now.

Yet him for this my love no whit disdaineth;

Suns of the world may stain when heaven's sun staineth.

Comment: "Between the time Shakespeare wrote Sonnet 32 and 33, the poet's entire attitude toward his relationship with his young friend had changed. While he had been focused on his own mortality throughout Sonnets 27-32, now the poet has a new and more pressing dilemma to jar him from his previous obsession. In Sonnets 33-35 the poet makes it clear that he has been deeply hurt by his young friend, who many believe to be the historical Earl of Southampton, Shakespeare's patron. We cannot say what specific wrong-doing prompted such displeasure, although we can assume that the young man had many interests other than the poet, and he may have surrounded himself with other friends (and possibly other lovers), leaving the poet feeling isolated and unwanted. The poet's dislike of his friend's actions are clear from the overall reading, but also from his choice of words: "ugly", "disgrace", "basest", "disdaineth", and "staineth." Moreover, the sun permits the clouds to cover his face as he cowers off to the west, and the direct comparison is made between the sun and the poet's friend in the third stanza. Even though he denies it in the concluding couplet, the poet seems to resent the friend for causing a rift in their relationship.

"As mentioned, the sonnet does end on a positive note with the poet ready to forgive his friend, content to accept that disappointment in this life is wholly natural. "Two Renaissance commonplaces, the sun-king comparison and the sun-son word play, are put to such good use in the friend's behalf that 'out alack', the emphatic but conventional phrase denoting the speaker's regret, seems no more than a polite formula."

Comment and Notes of Another Shakespeare Scholar: "A sonnet that hardly needs an introduction. This and the following record a rejection by the youth of the poet. How serious or real this was we have no means of knowing. Perhaps it is an imaginary interlude in the sonnet sequence. Most readers however take it as having autobiographical content, and that approach is given credence by what appears to be the genuineness of the sorrow, and by the fact that the episode of estrangement, whatever caused it, is dealt with in this and the following three sonnets.

"The fact that we are more disposed to believe in the biographical truth of the sonnet because of its beauty of imagery and language is a reality of human nature which cannot be easily dispensed with. It would be disapponting to learn that the youth and the poet's impassioned love for him were mere creations of an idle brain, with deliberate intent to lay a false trail and make truth out of fiction. For while we may allow that a Macbeth and a Hamlet are engendered in the heat of artistic creation, their existence gives us a vicarious experience which is not harmed by their fictional reality. I am not convinced that this is so with the sonnets, for we long to trust their sincerity, and to see what it teaches us of our own capacity for love, what it explores and what it defines. Therefore I always assume what I take to be the standard or Wordsworthian approach (pace Browning), that this is a true record of love, no doubt edited and embellished, (for who could ever be word perfect in such matters?).

"But we have to acknowledge also that the lover's frown and her (in this case his) overcast brow, like the sun clouding over on a fine morning, was also a part of the sonnet tradition. Shakespeare was here making use of that rich tradition, as well as recording in his own inimitable way the feelings of one so cast down by his beloved's disdain."

1. Full many a glorious morning have I seen: Full many = very many.

2. Flatter the mountain tops with sovereign eye: Flatter - also has the meaning to stroke. In its normal sense it conveys the idea of insincerity and deception, and ultimate disillusionment. Hence the morning sun was making the mountains appear more brilliant than they in fact were.  sovereign eye = majestic, kingly gaze. Note that here the usual flattery of king by subject has been reversed. The king flatters his courtiers, the mountains.

3. Kissing with golden face the meadows green: The sun kisses the earth. The glorious morning is partly subsumed into the character of the sun, as a result of sovereign eye and kissing.

4. Gilding pale streams with heavenly alchemy: Gilding = turning to gold; covering with gold. alchemy - this was the science which sought to discover how to turn base metals into gold. It was considered to be part magic, part science, and had a reputation for trickery and deceit. Nevertheless Elizabeth employed an alchemist in the early years of her reign, having been lured by the prospect of large sums of gold…

5. Anon permit the basest clouds to ride: Anon = very soon, almost immediately; permit - the subject is morning line 1, and, by implication, the sky and the sun.basest = blackest, dirtiest, of humble origin; low born. Cf. Edmund in King Lear:…Why brand they us With base? with baseness? bastardy? base, base? I.2.9-10. There is also a contrast with gilding and alchemy. Base metals were the ugly materials of the alchemist's study, which were destined to be turned into gold, the noblest metal of all.to ride - as horsemen. The clouds ride on the face of heaven as horsemen ride on the face of the earth.

6. With ugly rack on his celestial face: rack = a line or procession of moving clouds; thin, flying, broken clouds, or any portion of floating vapor in the sky.(Webster's) The winds in the upper region, which move the clouds above, which we call the rack, … pass without noise. Bacon. his = the sun's, the sky's, the morning's.

7. And from the forlorn world his visage hide:the forlorn world - the world becomes forlorn, presumably because it is darkened by the ugly rack of clouds, which hide the sun's celestial face (visage).

9. Even so my sun one early morn did shine:my sun = the youth whom I love; you; the heavenly eye of my life. This is however the first mention ofsun in the sonnet.

11. But out, alack, he was but one hour mine:But, out, alack - editors gloss this as being an emphatic way of saying 'Alas', out being an intensifier, and cognate with its use in expressions such as 'out upon it!'. However I think it also has reference here to the sun, which was only 'out', i.e. shining, for one hour. he was but one hour mine = I enjoyed his (the sun's, my love's) presence for only one hour.

13. Yet him for this my love no whit disdaineth: him….my love - these cannot both refer to the youth. If my love = the youth, then him must be the sun of 5-8 and 9-12, which has been disgraced by clouds ruining his face. But if him refers to the youth, then my love is 'my love for him', personified, which does not disdain him (the youth) for having become inaccessible. no whit = not in the least, not a jot.

14. Suns of the world may stain when heaven's sun staineth: The homophonic meaning, sons, is played upon. Sons of the flesh are also liable to blemish and disgrace, as heavenly suns are. stain can be used transitively or intransitively, so that the youth, as well as becoming stained himself, has passed the infection on to others.

Lovely. The picture, I mean.
Lovely, too, the sonnet. I especially appreciate the commentary. It is neat to see the words defined instead of just "the author meant this".

Cpngratulations on this blog.I cherish it like a treasure