Pride or Prejudice: A Look at Gay Pride Parades 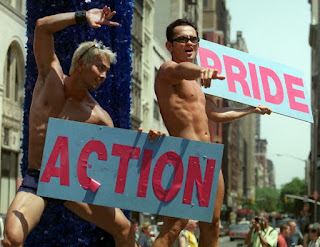 As Gay Pride season arrives, we often look back at the legendary uprising at Greenwich Village's now-historic Stonewall Inn. It was there that brave men and women raised up their hands and fists and said, "No more!" People were tired of being harassed, tired of being corralled and led away in shame and dishonor, tired of being treated like second-class citizens.

When the Stonewall was raided shortly after midnight on June 28, 1969, a group of gay men, lesbians, drag queens, street youth, hustlers and more fought back against the police. They used coins, bricks, garbage, bottles and their voices to tell the "authorities" to step the fuck back.

Two years later, the first Gay Pride parades took place in Los Angeles and New York and have spread to cities large and small the world over. But after 40 years, do we still need to gather in the streets in our capitals and small towns to tell the world, "We're here. We're queer..."? Ah, you know the rest.

It's an interesting concept, the "pride parade." Whether it's to show Puerto Rican pride, Irish pride, American pride or Gay Pride, people want to gather in the streets each year to say, "Hell yeah, this is who I am and I love it!" But do annual Gay Pride parades still have the same objectives and reach the same goals today as they did 20 —or even 10—years ago? The gay community has made major strides in the last decade. We have representatives in politics, entertainment, sports, science and adademics, and we are allowed to get married or have a civil union in dozens of countries and a number of U.S. states. Yet we still have a ways to go before we truly have equality.

When you think about Pride in your town or city, what first comes to mind? Is it the riots that started our gay liberation? Is it the political factions who helped us get where we are? Perhaps it's the companies that supported our rights to work alongside straight people and get the same benefits. Or do you just think about how messed up you're going to get while watching hot, buff, gyrating go-go boys toss beads your way?

In turn, how does society look upon gay pride parades?  Many right-wing conservatives see pride parades as a shameless display of hedonism.  I've heard friends of mine who I've talke to about pride parades, who are also pro gay rights, but still see the displays of flesh and costumes as a bit too much.  So what can we do to enhance the image of gay pride parades.  We will never get everyone to support the parades, but it does often shed a bad light on the LGBT community.  I read one comment on a website that stated "They may be gay or in support of Gay [rights] but they are clearly exhibitionists! Gay parades are like Halloween parades, and some of the costumes are offensive, But if that is the message they want to send, they will never be taken seriously." Is it the message we want to send? I don't think it is, but some people will never like what we do regardless.  I will say this, the times that I have been to gay pride parades, I had a blast.  It was a lot of fun and it was a place for LGBT people to celebrate our lives and love for one another.

However you view your Pride, you can't deny we got to this place today by the support and help of a lot of people. Whether you were in the trenches fighting or benefited from those actions, each summer we come together to remember how we got here.

But why can't we do this everyday? There is plenty of dissension within our community—gay men who hate lesbians (and vice versa), homos who hate drag queens, gay people who think the trans "T" people should be removed from the LGBT, racism among gays, and more. Indeed, these kinds of feelings should make us all take pause and ask what it is we're proud of. If each of us takes a step back and thinks about it, we can remember something in each of our lives that makes us proud to be gay. But is it because of some political victory, a civil rights issue, a politician or company, or a big fat party?

Yes, there are many ways to show Gay Pride. Just make sure you do something on one of the other 364 days of the year as well.

Email ThisBlogThis!Share to TwitterShare to FacebookShare to Pinterest
Labels: Pride

I like to watch the parade, looking at it from the entertaining point of view - color, music, costumes... BUT it is NOT a true representation of gay people and unfortunately ignorant viewers won't realize this. However we are fortunate that they see "us" as ordinary normal folks on TV and in the cinema as more and more actors come out and gay characters are portrayed like themselves.

I'm ashamed that some people's views on gay rights is based on the exhibitionist/sexually explicit/perverted stuff. Some guy called into a conservative talk show in Boston that I listen to and talked about seeing fat guys in leather slapping each other on the ass. That is not who I am and it is not the way that most of us behave. If straight people do that it's done in private, behind closed doors. Shouldn't we be showing skeptical people that, in many ways, we are like them?
If I ever march in pride, I'll do it fully dressed and show the world I'm a clothes horse and proud of it.

^That's the problem, the absolutely open displays of nudity and perversion in public that manifest these events. That will never change and until you intern the straights and the traditionalists that such behavior and lifestyle is "normal" and should be "accepted," nothing will change.