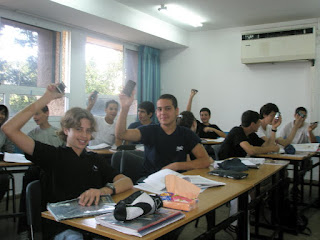 
Nine seventh grade students at a San Diego-based middle school were suspended last month after watching pornographic videos as part of a so-called "gay test," according to reports.

According to U-T San Diego News, students in all-boys English class at Bell Middle School in Paradise Hills allegedly wore gym shorts as they watched videos on their cell phones. Whoever became sexually aroused while watching the videos was labeled gay, and several adolescents masturbated openly during the class.

In addition, peers complained of inaction by teacher Ed Johnson, who is now reportedly under fire because he did not respond to students who told him about the behavior while it was allegedly happening, according to NBC San Diego.

Among those to condemn the news was Patiti Boman of Parents, Families and Friends of Lesbians and Gays, who called the incident "terrible," even though Bell Middle School officials have yet to confirm many details.

"I was thinking we were getting better and that's why we go out and speak in schools. This is news to me and this gives me chills," Boman, part of the team which helped craft the district's anti-harassment policy, told U-T San Diego news. "They use that to attack and intimidate." 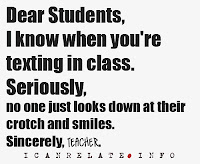 "We cannot tell you the reasons for the suspensions, or whether further action is being taken with respect to any particular suspension," Andra Donovan, deputy general counsel for the district, said in an email as quoted by NBC San Diego. "With respect to Mr. Johnson, all we can tell you is that he is employed by the District and remains assigned to Bell Middle School as of [May 25]. His schedule has not changed."

Still, Dick Thornburgh, a former U.S. attorney general and author of a 2002 study on how to protect youth from Internet pornography, told the Associated Press that he believes the case illustrates a growing problem.

"The images are perishable, so if a teacher is concerned about someone using a cell phone to look at pornographic images, all you've got to do is press a button and it's gone," he said. "So it poses all kind of challenges."

Why? Because they have no boundaries which are established, firm, and set in stone. In the local schools, police are present to help maintain order. The teachers can not enforce order in the classroom. The students can distrupt any time in any manner and the hands of the teacher are tied.

I seriously believe a return to the strict teacher I had in the first grade, with a strong ruler in her right hand to smack the palm of the unruly student is warranted. And to follow with appropriate discipline all through the 12 years of education.

The 'right' of a student to disrupt and prevent the others from learning must be limited.

And the boundaries set at school, must be supported at home.

Parents have relegated the raising of their children to the schools and the streets. Therefore, there are no rules, boundaries or limitations when they show up, and since schools are so busy teaching to the tests, they don't have the time to teach societal norms and standards at the same time. It's sickening, but you would (or maybe not) be surprised at the number of calls we get that are simply "parental responsibilities" that the parents are complaining we are not taking care of.

It's a shame they are shortchanging their kids so badly, and both we and they have to put up with the consequences.