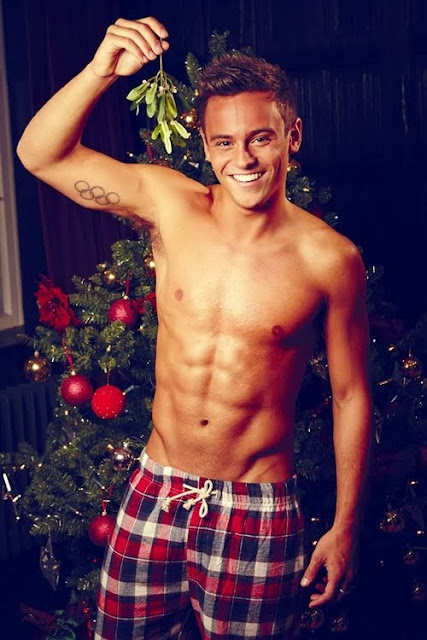 I doubt there are many people who have not heard the news that the hottest little diver in Britain made a big announcement Monday.  British Olympic diver Tom Daley revealed he's been in a relationship with another man in an emotional YouTube video.  This video just warmed my heart.  I've always had a special place in my heart for the incredibly cute and talented Tom Daley, this video just endeared me to him more.

Daley, 19, says in the video, "Come spring this year, my life changed massively when I met someone and it made me feel so happy, so safe and everything just feels great. And that someone is a guy.”

He then adds, "It was always in the back of my head that something like that could happen, but it wasn’t until spring this year that something just clicked ... My whole world just changed, right there and then."

Still, Daley stops short of using either the term "gay" or "bisexual." “Of course I still fancy girls," he says. "But I mean, right now I’m dating a guy and I couldn’t be happier. It makes me feel safe and just really does feel right."

The diver, who tweeted the video to his more than 2.4 million Twitter followers, concludes, "I’m still Tom. I still want to win an Olympic gold medal at Rio 2016 for Great Britain. I’m still as motivated as ever to do that.”

Daley's sexuality had been the subject of ample media speculation for some time. The diver, who won a bronze medal at the 2012 London Summer Olympics and was recently named the sexiest man in the world by Attitude magazine, laughed off the gay rumors in an interview with The Mirror earlier this year.

“I think it’s funny when people say I’m gay... I laugh it off... I’m not," he was quoted as saying. "But even if I was, I wouldn’t be ashamed. It wouldn’t bother me in the slightest what people thought."  Still, Daley said he was "cool" with his sizable gay fanbase: "It’s great to have gay fans even though my friends gently take the mick.”

It appears that Tom is a new breed of man. He's not one who seems to like to be labeled.  Isn't that something that would be wonderful if we didn't have to announce our labels and that we could just be who we are.  Alas, the world seems to need us to label ourselves so we do, but I congratulate Tom in not bowing to the pressure of a label.

When famed Olympic British diver Tom Daley revealed to the world Monday morning that he is in a relationship with a man, some of the responses from the Twitter universe were, unfortunately, less than positive.  However, Daley also received an outpouring of support from the public -- including a handful of celebrities who were quick to vocalize their pride regarding the athlete's decision.

Now, it looks as if Daley can also expect his family to get behind his decision to publicly come out. Though the diver's grandparents admitted they were a bit "confused" and surprised at first, the pair told the Daily Mail that they vowed to support their Olympic athlete grandson.

"We asked him if he was absolutely sure. He’s our first grandson from our son who died," Daley's grandparents told reporters. "We have always been supportive of him and we always will. We’re not old-fashioned, in fact we’re quite liberal. But I do think he’s too young to be making this sort of decision... But we hugged him, we thanked him for coming to see us, and we’ll be seeing him over Christmas. We’ll always be here for Tom."

Sounds like Tom has quite a supportive family and I couldn't be happier for him!

E! News and The Advocate are reporting that Tom Daily is dating Oscar winner Dustin Lance Black.  Many may not agree with me, but I hope this isn't true.  I've never particularly liked Black, though I've liked his movies.  I guess, Black is just not who I pictured with Daley.  Not that it really matters, but Daley is 19 and Black is 39.  I don't mind May to December romances, in fact I think their fine, but honestly, didn't you picture Daley with a hot young man his own age?  Maybe this is why his grandparents asked him, "...if he was absolutely sure."
Posted by Joe at 8:00 AM

We live in a different time now, and this is just more evidence!