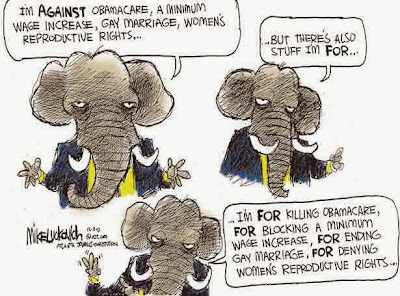 The political cartoon above is a prime example.  (Thank you Sean for posting this on your blog Just a Jeep Guy.)  Though it shows the negativity of Republicans, it could just as easily be any other political party in United States.  The Democrats are not immune to negativity.  It's too often the role of the minority party to be the most negative.

I have been discussing political parties a lot in my civics and government classes the past few weeks. When you teach about a political party's platform, and you list the many things that political parties are against, students will often ask, "What is the party in favor of?"  When you say that they are for cuts in Medicare, food stamps, subsidies for farmers, keeping the minimum wage as is, etc., the smart kids in the class will ask, "Aren't those all negatives as well?"

When I teach politics, I do my best to remain neutral.  It's the most difficult thing I have to do as a teacher, but I do my research so that I can present both sides of an issue.  I believe in teaching my students that they should be informed citizens.  If one is well versed in the issues and researches the politicians, then they are likely to be an informed voter.

I honestly believe that optimism can be contagious.  Considering that most people dread Mondays, what better day to start with an optimistic view for the week.  Let your optimism spread and maybe by New Years will be a more optimistic place.

Any time. I think most politicians are only for getting re-elected.

Sad to say but those politicians are there to be «against» anything that is not coming from their own «brain» (If they have one...LOL).

Also, WHERE are those commited politicians that REALLY work FOR the REAL PEOPLE....
Not only for the fortunate, weatlhy, white, christians,straights Americans..

As I Candadian, and it's not much better here, I often think of ALL the «war money» you spend in the Middle East and everywhere...
WHY not put that money ON YOUR own PEOPLE ???

I saw this «Did you know?» on another site: "Irak and Afghanistan have universal health care provided by funding from USA..."

America has to do a serious self examination in regard of your intern and foreighn politics..
BUT, also, why don't you have more that 2 parties....
We have more than 2 parties, at federal and provincial governements, that provides us more ideological options and choices when we go on election...

Politicians in this country are in it for one reason and one reason only: personal recognition, power and gain. There is no statesmanship, no altruism, no desire to help anyone. Everything they do on both sides, at all levels, point to this. I'm disgusted with them all.

I totally agree with Jay -- personal recognition, power and gain....add self-aggrandizement to that.

Just as I could not be an unbiased journalist, I cannot imagine having to teach civics and government in today's environment and trying to remain neutral. There are so many reasons for not being able to "be yourself" teaching in that school, and I give you great credit for walking that fine line.

Oh for a true statesman of the example set by Churchill to appear on the scene in any place.

Oh for the end of politicians of the example set by _________(fill in the name of any of our current members of the House of Representatives or U S Senate!!!

Let me join the chorus here. Politicans are in it for themselves.

I just finished Doris Kearns Goodwin's "Team of Rivals" about Lincoln and his cabinet. It's 746 pages & took me a long time.
Lincoln brought together people who didn't get along politically.