May "The Professor" Rest in Peace 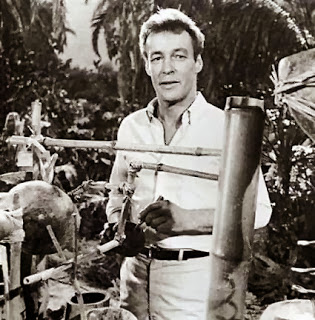 Two characters of movie and television inspired me to become a teacher.  Those two characters were the Professor from Gilligan's Island and Indiana Jones.  I think there are few historians or archaeologists of my generation who were not inspired by Indiana Jones, and the Professor was just so incredibly smart. On January 16, 2014, Russell Johnson passed away from natural causes.  He was best known for playing the handsome Professor Roy Hinkley (usually referred to as "The Professor"), the very knowledgeable polymath who could build all sorts of inventions out of the most rudimentary materials available on the island, but, as Johnson himself pointed out, could not fix the hole in the boat.

Gilligan's Island was one of my favorite shows as a young kid (ranking with I Dream of Jeanie, Bewitched, and Scarecrow and Mrs. King).  On Gilligan's Island, the Professor was always my hero.  The Professor was a good-looking but nerdy academic, an exaggerated stereotype of the man of capacious intelligence with little or no social awareness. Occasionally approached romantically by Ginger (and guest stars, including Zsa Zsa Gabor), he remained chaste and unaffected.  Since I was a kid, who didn't understand why I was not all crazy about girls and had more of a fascination for boys, it seemed like remaining "chaste and unaffected" was the way to go.  It would largely remain my philosophy until I was in my twenties.  The Professor was my role model in many ways.

Before becoming an actor, Russell Johnson served in the U.S. Army Air Forces during World War II. He was on a B-24 Liberator when it was shot down during a bombing raid over the Philippines in 1945, according to his official biography, and used his G.I. Bill benefits to pay for acting school after the war.

Johnson married Kay Levey on July 23, 1949. Their son, David, ran the AIDS program for Los Angeles, California, until David's own death from complications of AIDS in 1994. Johnson was a full-time volunteer for AIDS research fundraising since his son was diagnosed.  He also had a daughter with Levey, Kim. Kay Levey died on January 20, 1980 in Century City, California. In 1982, Johnson married Constance Dane.  Johnson is survived by his wife, Constance Dane, and daughter, Kim Johnson, from an earlier marriage.
Posted by Joe at 8:00 AM

Gilligan's Island was a great and funny show...wish it were still being produced with new episodes. And the professor was an asset to the show without a doubt. Will miss him..

What a great show that was! And, I didn't know he served in the military. That's awesome. :)

I watched the show religiously just so I could see what The Professor would invent each week. He was outside my feelings at the time, but I admired him none the less.

Joe: Another thing we have in common. I used to watch GI everyday after school. that along with the Flintsrtones. Of course the connection with Hawaii was also a draw, since the Minnow was home ported in Honolulu.