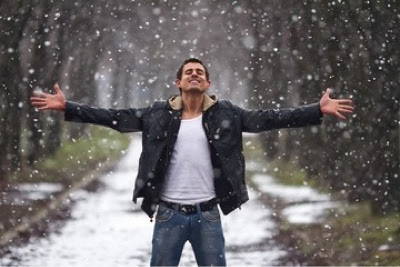 Snow Day
By Billy Collins
Today we woke up to a revolution of snow,
its white flag waving over everything,
the landscape vanished,
not a single mouse to punctuate the blankness,
and beyond these windows

the government buildings smothered,
schools and libraries buried, the post office lost
under the noiseless drift,
the paths of trains softly blocked,
the world fallen under this falling.

In a while, I will put on some boots
and step out like someone walking in water,
and the dog will porpoise through the drifts,
and I will shake a laden branch
sending a cold shower down on us both.

But for now I am a willing prisoner in this house,
a sympathizer with the anarchic cause of snow.
I will make a pot of tea
and listen to the plastic radio on the counter,
as glad as anyone to hear the news

So this is where the children hide all day,
These are the nests where they letter and draw,
where they put on their bright miniature jackets,
all darting and climbing and sliding,
all but the few girls whispering by the fence.

And now I am listening hard
in the grandiose silence of the snow,
trying to hear what those three girls are plotting,
what riot is afoot,
which small queen is about to be brought down.

Billy Collins (born William James Collins; March 22, 1941) is an American poet, appointed as Poet Laureate of the United States from 2001 to 2003. He is a Distinguished Professor at Lehman College of the City University of New York and is the Senior Distinguished Fellow of the Winter Park Institute, Florida. Collins was recognized as a Literary Lion of the New York Public Library (1992) and selected as the New York State Poet for 2004 through 2006. He is currently a teacher in the MFA program at Stony Brook Southampton.

Source: Sailing Alone Around the Room: New and Selected Poems (Random House Inc., 2001)
Posted by Joe at 8:00 AM

Enjoy your day off! I remember WAAAAAAAY back in 1993 when it snowed in Montgomery. It was awesome. The only downside was that it happened on a Saturday, so no cancelled classes. LOL

Stay safe. I can only begin to imagine how back the drivers will be today and tomorrow. I mean, even worse than they normally are! LOL

Lovely image, lovely poetry. Have a truly lovely day! I remember when I was growing up in southeast Texas what excitement the rare snow brought. And even here, where it is common, I still relish the hush and the crisp beauty.

That white stuff is falling here now and landing on the ice covered streets and steps....all the world here has come to a standstill with just five flakes...what will happen when more fall from the sky!

As usual, I'm so «happy» that you can experience what we're used to up here in Canada and in Province de Quebec...

Just to make you feel better, when I was teaching in Sept-Îles, a northern city 8 hours drive from Quebec City, we experienced many time so cold weather that schools were closed because it was too dangerous the GAZ WOULD FREEZE in the school buses..

Not to mention that being exposed to those POLAR TEMPERATURES we could dangerously freeze some exposed parts of our body....
The sky was so nicely blue and the sun couldn't heat this polar atmosphere...

SNOW is just the less worst situation we have up here....

Enjoy the nice white blanket covering all the pollution and bad landscape stuff....

JiEL, the snow always adds to the beauty of Alabama. Where I love it's mostly pine forests and cow pastures, with nice clean air. We so rarely get temperatures and winter storms down here, so it's a nice little diversion to be able to snuggle up to the fire. The worst problems we have is when ice accumulates on the roads because we are not equipped for it, so most roads close. Also, ice on the power lines cause them to break and we lose power.

We may get snow once a year or so, but the freezing rain and ice storm that we are experiencing can be quite dangerous down here, since we are just not equipped to handle it.

Robert, the last major ice storm I remember was in the early 80s and everything was covered in a thick layer of ice. We've had accumulated snow a few times that I remember, such as back in 1993, but rarely do we ever get much accumulation. Right now though, we are covered in a thin layer of ice, but it's only supposed to get worse as the day wears on.

The line in the poem that got me is "the dog will porpoise through the drifts". That's EXACTLY how my Bullwinkle used to lope through snow, chuffing and wallowing as he went, loving every second that he could play in the snow! (BTW, how's HRH?)