The Covenant
Jewish circumcision is justified by the Covenant. Genesis prescribes it 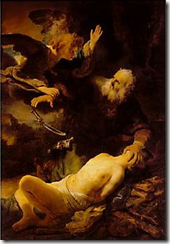 explicitly: “God said to Abraham: As for you, you shall keep my covenant, you and your offspring after you throughout their generations. This is my covenant, which you shall keep, between me and you and your offspring after you: Every male among you shall be circumcised. You shall circumcise the flesh of your foreskins, and it shall be a sign of the covenant between me and you. Throughout your generations every male among you shall be circumcised when he is eight days old, including the slave born in your house and the one bought with your money from any foreigner who is not of your offspring ... Any uncircumcised male who is not circumcised in the flesh of his foreskin shall be cut off from his people. He has broken my covenant”.
Thus the circumcision of Abraham expresses the divine will to conclude a permanent alliance; it is applied to the organ of procreation--a symbol of eternity.

Myth of androgyny
Under this interpretation, “man was created man and woman; he did not 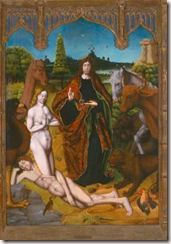 become man until his feminine part was removed”. The extraction of Adam’s rib could also be symbolic of circumcision. Adam called the new creature “woman” and assumed his true identity by giving himself a new name: “man”. An original state of androgyny was also invoked by Plato. The incompatibility of androgyny with the development of a harmonious society could have made circumcision an indispensable tool for reconciling men and women. As a matter of fact, Zeus says in the “Banquet” that he has “a plan that will allow men to exist but will humble their pride. I will diminish their strength by cutting them in two ... but if they continue insolent I will split them again. When man’s nature has been diluted in this way, each half will miss the other half and reunite with it”.

Mythologies of Africa
Circumcision in African societies is the object of various explanatory myths, 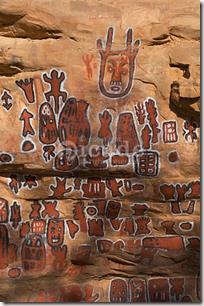 some of which are similar to the myth of androgyny. Of these myths, some say that the first male and female creatures were rough-hewn in a primordial egg. One of the males emerged prematurely from one half of the egg. In an attempt to take sole possession of the world, he tore out a piece of his placenta. One of his own sexual parts, the prepuce, was cut off by God as a punishment for stealing part of the divine placenta.
In other primitive societies, circumcision takes on a meaning akin to the Oedipus complex. Having been forbidden to approach their mother and sisters, the grown sons of the chief kill their father, then kill one another out of rivalry for the same women. When they become aware of their crimes, they cut off their penises in expiation. This practice is replaced by circumcision. In this interpretation, circumcision is indeed supposed to reduce sexual excitation, a reduction indispensable for subordinating individuals to social systems.
For some groups in West Africa, circumcision assumes a meaning similar to the explanation found in Plato. (Photo above: Mali, near Bandiagara, Dogon Country, Songho Dogon Village, ceremonial site for circumcision rituals, with cliff paintings.)  Every child is born surrounded by an evil force, more specifically an evil force attached to the prepuce (or the clitoris in the case of a girl). This force is capable of causing a disorder that makes it impossible for a man to live with anyone. It is necessary therefore to rid every boy of his prepuce and every girl of her clitoris. The maleficent force then falls on children who have not yet been circumcised.

Hygienic aspect of circumcision
Considerations of hygiene also form part of the significance of ritual circumcision, which may then assume value as a prophylactic. Besides alleviating balanitis, the first circumcisions may have been aimed at preventing sexually transmitted infections (STI). Thus Abraham, living in very precarious conditions of hygiene, may have imposed circumcision as an adjuvant for STI prevention. Later, circumcision was prohibited during the period of Egyptian bondage except among the Levites. After leading his people out of the desert, Moses noticed that only the Levites had increased in number. He concluded that circumcision had protected them from STI, and reinstated the practice. More recently, the anxiety about venereal disease in France at the end of the 19th century brought forth proposals to introduce circumcision as a public health measure: “Of all the surgical methods recommended to protect the public against venereal diseases, circumcision is the surest and least questionable”.

Other elements of meaning
Other interpretations include the role of the prepuce in fertility. African women who have had only girls are sometimes advised to eat a prepuce in order to have a boy. Elsewhere, circumcision may be practiced to increase sexual pleasure. It may also be considered a sign of captivity or a mark of bravery.