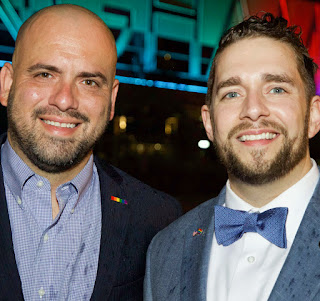 Mike Rudulph grew up near Birmingham, Alabama and enlisted in the Marines when he was 20 years old. At the time, he hoped that the military environment would bring him the sense of purpose he had been missing.

This was in 2000, during the era of “don’t ask, don’t tell,” when LGBTQ people in the military couldn’t serve openly.

Mike went on his first deployment to Iraq in 2003. When he got home, he met the man who would later become his husband, Neil Rafferty.

They got married in 2018, the same year that Neil ran for public office in Alabama — and won! He is the first openly gay man to serve in the Alabama State legislature.

At StoryCorps in Birmingham, Alabama, Mike and Neil sat down to remember the early days of their relationship.

Cool interview. Neil is my state representative. Before he took office, an out lesbian represented our district, Patricia Todd (2006-2018). Neil definitely flies under the radar a lot more than Patricia, who was always blazing trails. Many people don’t know it, but Birmingham is very gay-friendly! It’s miles away from my rural hometown in land and progress. I’m proud to call it home. Thanks to Mike, Neil (also a USMC veteran), and all the other veterans for their service today and every day.

Dylan, I was very happy when Neil took Patricia's place. I've never lived in Birmingham, but I always kept up with Patricia's political career when she was in the statehouse. She definitely didn't always fly under the radar. Neil seems to be a great legislator and a perfect replacement for Patricia.

I always knew more about the gay scene in Mobile because it was closer to my graduate school, but I can see how Birmingham would be very gay-friendly. It's always been a bit more progressive than the rest of the state. (At least, it has been in recent decades.) I am glad that gay people like you are staying in Alabama. One day, it will make a difference, but as much as I love my home state, I am glad not to be there anymore. My relatives and friends down there are far too conservative for me. It gets me into trouble sometimes because I just can't hold my tongue.