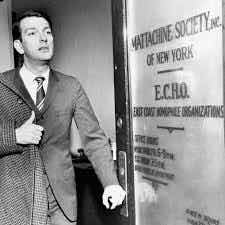 Most historians agree that the movement towards gay rights, at least, nominally began with the founding of the Mattachine Society in Los Angeles in 1950 as the first gay rights organization in history. Harry Hay founded the organization and gave it its name after the medieval group of court jesters who satirized the government and royalty by wearing masks to keep themselves anonymous. Mattachine went through two different phases in its development. Early leadership based the leadership of the organization on the cell structure of the Communist Party with a secret hierarchical structure and a very centralized leadership. The seven founding members of the Mattachine Society remained anonymous as the mysterious “fifth order” who ran the organization through their leadership. The organization had three primary goals: to unify homosexuals as a group and with the dominant heterosexual culture, to educate both homosexuals and heterosexuals on the subject of homosexuality, and to enter the realm of political action.[1]
Due to the insistence of the first Mattachine Society that homosexuals adapt to the homophobic society of the Cold War by adopting the social and cultural mores of heterosexuals, the organization began to lose influence and membership. By 1957, the organizations national headquarters moved from its base in Los Angeles to San Francisco where it remained until the national organization disbanded in 1961. With the end of the national organization and its insistence on conservative politics, the local chapters began to become more radical in their quest for gay liberation.[2] The Communist Party structure and tactics of the Mattachine Society ultimately hurt the organization more that it would help it. With the Red Scare during the Cold War, the politics of the movement had a difficult time getting any recognition. Besides its communist association, this early homophile organization was never that large of a political organization. The fear of being publicly discovered as a homosexual was worse than having freedoms during the 1950s, when coming out meant that you were considered mentally ill, a social deviant, often classified as a criminal, and were barred from holding civil service jobs.
In his examination of the radicalization of the gay liberation movement, historian Justin David Suran shifts the focus from the radicalization of local homophile organizations to the gay participation in the antiwar movement. Local homophile organizations were still working for homosexuals to be “normalized” by assimilating into imagethe heterosexual cultures, most by allowing gay men and women to serve discretely in the U.S. Armed Forces. With the ability to be deferred from the draft by being labeled homosexual, many young gay men saw the opportunity to stay out of the Vietnam War. As the war continued into the early seventies, the deferment for homosexuality would have to be proved by a doctor or an arrest report in order to receive the deferment because of the prevalence of heterosexual men posing as homosexuals to stay out of the military.[3]
[1]Martin Meeker, “Behind the Mask of Respectability: Reconsidering the Mattachine Society and Male Homophile Practice, 1950s and 1960s,” Journal of the History of Sexuality 10, no. 1 (2001): 83.
[2]Ibid., 79.
[3]Justin David Suran, “Coming Out Against the War: Antimilitarism and the Politicization of Homosexuality in the Era of Vietnam,” American Quarterly 53, no. 3 (2001): 458-463.
Next: The Anti-War Movement
Posted by Joe at 6:00 AM