In Honor of Presidents' Day... 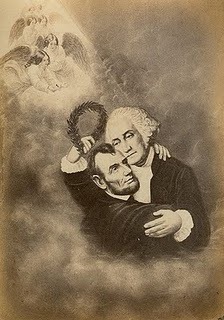 It’s Presidents’ Day, but whom the holiday is meant to honor depends on whom you ask. Even the placement of the apostrophe is open to question! To the U.S. government and Virginia, the home state of George Washington, the holiday is recognized as “Washington’s Birthday.” Some states jointly celebrate the birthdays of George Washington, born Feb. 22, and Abraham Lincoln, born Feb. 12, while others honor Washington and Thomas Jefferson but not Lincoln. In some Southern states, all of the presidents are commemorated on Presidents’ Day.

So in honor of Presidents' Day (since I do live in one of those Southern states that commemorate the day as such), I have two specials for you guys. First I have reposted just prior to this post two earlier posts about Presidents that may or may not have been gay.

and I can't forget the Senator from Alabama, who was also for a brief time, Vice President of the United States:

Also, in honor of the day, here is a little presidential trivia quiz from the Washington Post:
1. What is the birth state of the most presidents?
2. How many U.S. presidencies have there been?
3. Who was the first president to live in the White House?
4. Which is NOT true about Lincoln's Gettysburg Address?
5. Fill in the missing words in the president's oath of office: "I do solemnly swear (or affirm) that I will faithfully execute the Office of President of the United States, and will to the best of my Ability, ---, --- and --- the Constitution of the United States."
6. True or false: George Washington owned many slaves but decided to free them in his will.
7. Who was the only president to serve two nonconsecutive terms?
8. Lincoln was virtually unknown in the Republican Party in 1858 when he challenged the powerful U.S. Sen. Stephen Douglas of Illinois. The two debated seven times between July and October of that year. Which is NOT correct?
9. Four presidents were assassinated in office, and four others died from other causes. What killed William Henry Harrison?
10. What was Woodrow Wilson's nickname?


The answers will be published this evening, so stay tuned.

1. Virginia
2. 44
3. John Adams
4. It only lasted just over 2 minutes.
5. Preserve, protect, defend
6. True, it was when Martha died, but she freed them about a year after his death.
7. Grover Cleveland
8. I think "b"..."As a result of the debates..."
9. Complications of pneumonia.
10. Some sources list "The Professor", others lsit "The Phrasemaker", "The Schoolmaster of Politics", "The Coiner of Weasal Words".