15 Gay Reasons to Watch the Super Bowl (Not Counting Madonna)

Editor-at-large, Logo's NewNowNext.com; co-host, 'Drag Ya Later with Jon & John
This Sunday brings the Super Bowl, and like many Americans, I will attend a party, watch the mega-spectacle unfold while eating lots, drinking a bit, and hooting and hollering as stuff happens on TV.

Why should you care as a gay person? Why should you watch? Here's the deal. (Some generalizations will follow. And some X-rated suggestions. Mom, please, don't read number 6. And yes, I'm skipping Madonna entirely in this equation, to truly make a valid case.) 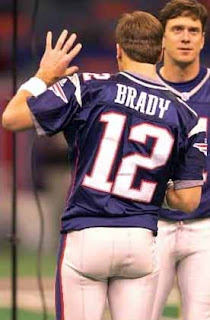 Simply put, the old saw that homos aren't into jock-related things (jock-straps aside) is dated and bogus. And I'm not even talking about lesbians, which is an entirely different article or thesis project on sports history, gender roles, and sexual identity.

14. Because the two quarterbacks are worth watching. 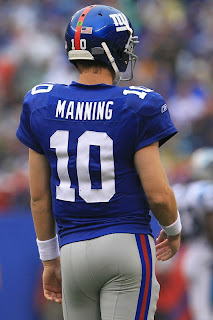 Tom Brady is very, very handsome. Remember all those pics from VMan a few years back? And Eli Manning, though not as Bruce-Weber-ly handsome as Brady, possesses his own dorky cuteness. (They tried to dress him up for Men's Vogue a few years back. An adorable effort.)

Let's put it like this. You're 14 years old and in high school. Brady's the Big Man on Campus who is your older sister's boyfriend, whom you follow around like a pup. He'll be nice of you in front of your sister but never give you the time of day otherwise. Eli, on the other hand, is the approachable jock down the street who'd actually give you a ride home from school, even though you're in 9th grade and he's a senior (and All-State!), just because he's nice (and honestly, not that cool). How can you not love them both?

(At the risk of digressing completely, what is with all of the hot QBs these days? Mark Sanchez. Alex Smith. And can you just imagine how good the searingly studly Aaron Rodgers must smell?)

Also, Brady and Manning are both at the top of their game and completely unpredictable, which makes for a good match, yes?

13. Because a supermodel is pleading for your help.

Brady's wife, Brazilian supermodel/gazillionaire Gisele Bundchen sent out a mass email asking friends/family/fans to send prayers and good vibes to the powers that be so that her hubby can win the big game. Like, really!

I don't know about you, but I listen to my supermodels. They know best. And if you disobey, you might get clocked in the head with a pointy cell phone. (JK, Naomi!)

12. Because you're a snarky media whore (social and otherwise).

Gays love to be all slick and on top of every media moment. The Oscars. Fashion Week. Presidential Inaugural Balls. New Britney demos being leaked. And while we gush about those sorts of things, the Super Bowl really is the big, honking grandmama of all media events, people. Nothing else comes close to taking over all the news, coverage, cultural conversation, ad dollars... Face it, the Oscars are a forlorn, gay stepchild when it comes to the sheer onslaught of 360-degree-medianess of the Super Bowl.

Thusly, your Facebook and Twitter will be exploding. Own it. Instagram pics of mounds of chicken wings. Unleash your wit and gift for pervy sass as the big match rolls on, blinding others with your gift for double entendre and sharp, punny comments.

11. Because you're an advertiser's wet dream. 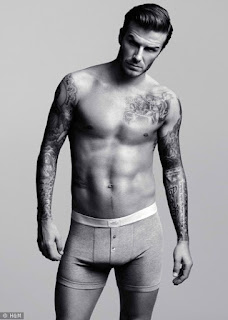 I'm not ashamed to admit I'm excited to see the commericials. Even though I've already watched many of the biggies online (part of that aforementioned social media Super Bowl juggernaut), including the return of Ferris Bueller for Honda.

But to add extra gay excitement, we get David Beckham in his undies, adorable John Stamos getting owned by some chick over a bit of yogurt, Sir Elton John in a furry robe and crown, and... doggies and Star Wars!

Also, I must admit, I loooooove the stupid, gratuitous T&A that the GoDaddy ads deliver each year. (I also grew up loving the buxom, hayseed ladies of Hee-Haw and laughing madly to Benny Hill's antics. What can I say? I like cheese!)

And if you really want to get into a social-media/advertising K-hole, you can point your iPhone at the TV during a number of the ads, use your Shazam app, and you'll get coupons for free stuff or entered to win cars! Gaaaah! Consume like you've never consumed before!

The Super Bowl is on NBC this year, so it will be followed by a very special episode of The Voice. (Gay-friendly hottie Adam Levine! Diva/mess extraodinaire Xtina!). And you can be assured that throughout that, NBC will also be promoting the hell out of its new TV series Smash, featuring Grace (Deborah Messing), Anjelica Huston, Broadway musicals, and Marilyn Monroe. Expect random gayish promo-splosions amid the first downs and car ads.

9. Because the Super Bowl is gay-supportive.

Both teams this year hail from states where gay marriage is legal. And according to the gay sports experts at OutSports.com, the N.Y. Giants have sent representatives to queer sporting events (like the "Gay Super Bowl"), and Giants' owner Steve Tisch released a video supporting gay marriage, as has former Giants superstar Michael Strahan. The owner of the Patriots has spoken at LGBT business and networking events, and players from each team have supported the NOH8 campaigns. Woo-hoo! Go gays!

Also, in a very cool move, fans in Indianapolis' Lucas Oil Stadium will see a PSA created by GLSEN that features NBA stars Jared Dudley and Grant Hill and targets anti-LGBT language among teens. The PSA will be shown to the 70,000 fans attending the Super Bowl and to the 80,000 watching from the tailgating mania surround the place. Rah, rah, gay! 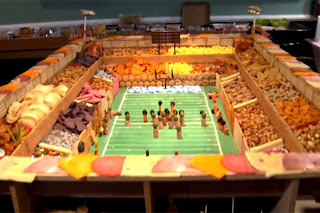 Over a billion chicken wings will be consumed in the U.S. this Sunday. Which is terrifying (if still kind of tasty). But chances are, you'll also have a chance to hang with friends with decent palates and food-prep skills, so you'll be noshing on really good versions of BBQ, chili, hoagies, and sweets and chips and dips for days. And if you follow food mags like Food & Wine or Bon Appetit or sites like Epicurious.com, they've been exploding for weeks with a million ideas of great party eats.

Indulge your inner Ina Garten (or Martha or Paula or Giada or whichever culinary idol melts your butter) and turn your kitchen out!

Ummm... This is somewhat scary, but the freaky and possibly bearishly hot guys behind Epic Meal Time have schemed up this jaw-dropping video about making a disgusting creation called a "Big Dirty Manningwich," which gets topped with "Brady Gravy."

6. And speaking of being twisted...

(Skip this part, Mom.) Maybe you have no interest in football, splashy commercials, chicken wings, gay-supportive sports franchises, or pop divas. You are just a proudly shameless, filthy sex fiend. Go to Craigslist.org for your city. You'll already see M4M ads looking for willing partners for all flavors of Super-Bowl-themed action. Maybe you just wanna "help out" a party of straight guys as they watch the big game? Maybe you're a hungry human end zone ready to be violated by an opposing team? Maybe you just like to watch people who like to watch a big game? Maybe you just wanna dress as a maid and... you get the idea.

Also, Grindr and ManHunt will likely be blowing up during this whole thing. Folks drinking early on a Sunday evening. It's gonna get trashy.

5. Because there will be puppies.


4. Because there will also be a kitty-cat half time show.

1. Because you love America. 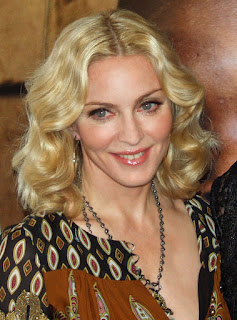 Oh, how could I not? Honestly, I'm very excited about the Giants/Patriots match-up. But come on! How can any person with a pulse not be a little curious about what Madonna -- arguably, the biggest living pop icon -- is going to do at half time? We already pretty much know about the songs (the new one, as well as most likely "Vogue," "Music," "Ray of Light," and possibly "Holiday") and the guest stars (M.I.A., Nicki Minaj, Cee Lo Green, LMFAO?).

Will she crash and burn? Will it be awesome? At the very least it'll be dishy, spectacular, overblown, and dish-worthy! (I'm still grinning from the half time show three years ago when Bruce Springsteen [whom I love] slid crotch-first into an onstage camera, putting the entire planets' collective eyes out with his man-groin.

Still, I can't help but root for old Madge to pull something off brilliantly. She's due. And though seeing her pointy mug splayed up live on a 72-inch, HD, plasma screen might be jarring, I'm ready for it.

Now, please pass me some of that "Brady Gravy."

Truthfully, I personally am not very excited about this Super Bowl.  I only get excited if the Saints are playing, so I have only been excited once, LOL.  However, I will bow to the social pressure and watch the game, really only for the commercials.  After you've watched the Super Bowl, what was your favorite commercial this year?


I will be pulling for the Giants because I have a former student in their starting line-up.

Not a huge sports fan here, but I am watching the big game while catching up with blog reading. Saints fan, eh? Me too.

I guess I'm not as gay as I thought (I am bisexual) because most of the items on this list I totally disagree with or, at the very least, certainly do not apply to me!