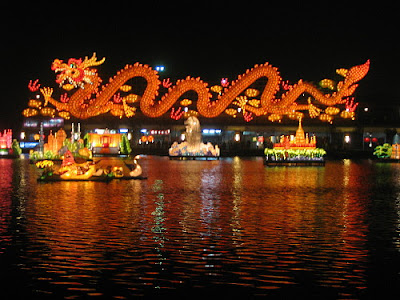 Chinese started to celebrate the Lantern Festival from the Han Dynasty (206 BC - 221 AD). Like most other Chinese festivals, there is also a story behind the Festival. It is also believed that the festival has Taoist origins.

This is a festival for people having fun. On the night of the festival, people go on streets with a variety of lanterns under the full moon, watching lions or dragon dancing, playing Chinese riddles and games, and lighting up firecrackers. There is really a lot of fun for the young and the old. The festival is not well celebrated in the US, though you may find celebrations in some Chinese communities, such as Hsi Lai Temple, Hacienda Heights, California. 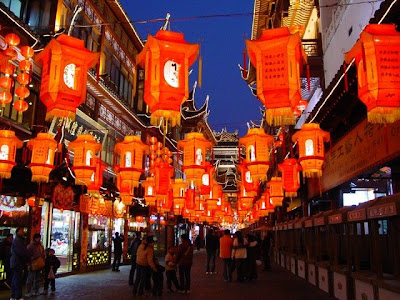 Traditionally, the date once served as a day for love and matchmaking. It was one of the few nights without a strict curfew. Young people were chaperoned in the streets in hopes of finding love. Matchmakers acted busily in hopes of pairing couples. The brightest lanterns were symbolic of good luck and hope.

Those who do not carry lanterns often enjoy watching informal lantern parades. Other popular activities at this festival include eating Tang Yuan, a sweet rice dumpling soup, and guessing lantern riddles, often messages of love.

Yuanxiao (glutinous rice ball) or Tangyuan is the special food for the Lantern Festival. It is believed that Yuanxiao is named after a palace maid, Yuanxiao, of Emperor Wu Di of the Han Dynasty. Yuanxiao is a kind of sweet dumpling, which is made with sticky rice flour filled with sweet stuffing. And the festival is named after the famous dumpling. Yuanxiao is sticky, sweet and round in shape, symbolizing family unity, completeness and happiness.

You can find Yuanxiao in oriental food stores. If you enjoy cooking, here is a recipe of Yuanxiao for you. 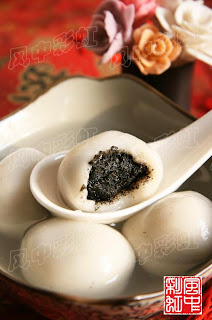 Methods
1. Mix the butter with sesame powder, sugar and wine together. You need to heat a little bit. Make small balls about 0.3-0.4 oz (10 g) each.
2. Take 1/2 cup of sticky rice flour. Add water into the flour and make a flatten dough. Cook it in boiled water and take out until done. Let it cool down. Then put it in the rest of the sticky rice flour. Add water and knead until the dough is smooth.
3. Make the dough into small pieces about 0.3-0.4 oz (10 g) each. Make it like a ball using hands first and then make a hole in the ball like a snail. Put the sesame ball into it and close it up.
4. Cook them in boiled water. Make sure to keep stirring in one direction while cooking. When they float on the water, continue to boil for about one minute using less heat. 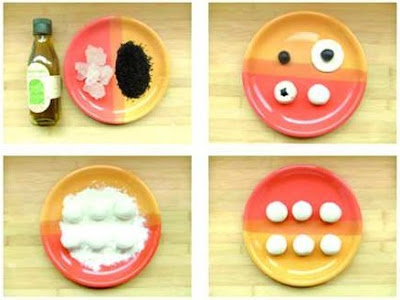 Email ThisBlogThis!Share to TwitterShare to FacebookShare to Pinterest
Labels: Recipe