Off the Deep End 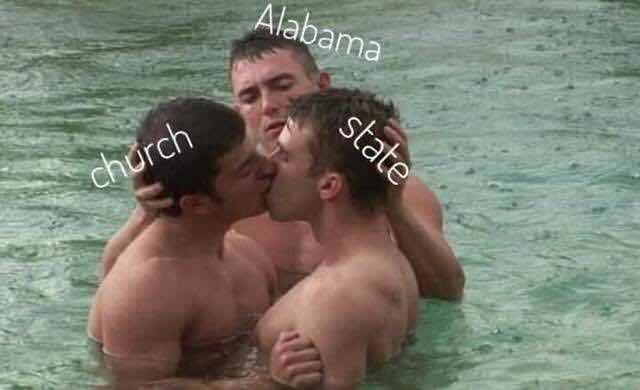 Alabama has gone off the deep end. The legislature can’t even pass a fucking education lottery to get the state out of the bottom in education, but they can pass some of the most asinine laws. First they made it a 99 year prison offense to get an abortion, and the governor signed it. A woman herself and the senile old bitch signs the most anti women’s rights bill in America. Now they’ve outlawed marriage licenses. Just because some probate judges couldn’t follow the fucking law and issue marriage licenses to gay couples in their county. I think you need a marriage license not a marriage “document” for a legal marriage. To me this law invalidates all marriages in Alabama. It makes me a bastard, when my parents have been happily marriage for nearly 50 years. I know that it is extreme to think that way, but I can’t help feeling that they are doing away with real marriages. I’m so pissed at my home state. A Republican legislature. A Republican governor who not only is a traitor to women everywhere but has long been rumored to be a lesbian and a traitor to the whole LGBTQA community. Then there is the all Republicans Suoreme Court which will uphold these laws. Thank God they will have to go to SCOTUS, which I hope they both do and are both overturned.
Posted by Joe at 6:00 AM

Since the 2016 election of the «Clown in Chief» in the White House, USA are going backward in many fields.

Not surprising to hear that outrageous law in Alabama (the new «Sharia-bama» state) were being a woman and a LGBTQ is now dangerous for your life.
For SCOTUS, dear friend, I wouldn't be so hopeful because the majority are «republicans» named by the «Clown in Chief» and they don't give a dime for women's rights and less more for LGBTQ too.

The only hope is in 2020 election and even then, will the majority of «deplorables» re-elect that «genius stable» president?

He's a shame for the office of Presidency of USA which was years ago a leader for the rest of the democratic countries.

USA is isolated more and more and your people are suffering of it.

The problem is the state's been brainwashed by Conservatives who are more concerned with total control of society then they are anything else... oh, and they happen to be white.

Thank God, I live in Canada…

I am a gay Republican. I am pro-life. Yet, I am still ashamed of this extremism. I can honestly say that I miss the corrupt House Speaker Mike Hubbard being in charge. At least he would have never let these bills even come up for a vote on the House Floor, because he wanted to maintain a business-friendly environment in our state. He stopped a "Religious Freedom Bill," that allowed businesses to discriminate against LGBT folks dead in its tracks. It is sad that I prefer corruption over what we have now. But, it seems less dangerous. I have no hope that sane voters will bind together to oust these crazies, because they had the perfect opportunity with Mayor Walt Maddox, an energetic conservative with progressive ideas, but he had a "D" beside his name, so they instead voted for the senile woman who auctions her decision-making off to the highest bidder.

I went a couple days without reading one of my favorite blogs and I miss a discussion about one of my favorite topics, Alabama politics. I could not agree more with you, Joe, and Steven is right on as well. In high school, I interned for a couple of Democrats in the legislature. I was raised a Reagan Republican, but I came to admire men like Lowell Barron, Roger Bedford, and Ted Little. The man I admired most in Montgomery was Jeff McClaughlin. He is one of the last honest men to have served in Montgomery. I came to know of other Democrat greats like Big and Little Jim Folsom, Bill Baxley, and the Pattersons, through them. I even admire Don Siegelman and believe he was dealt an incredibly unfair hand. I later worked for one of the Democrat legislators I'd interned for, after the Republicans took a supermajority in 2010. He has since retired. It seems like no one was willing to fight for the Democratic Party in Alabama, except Nancy Worley, and she only wants the office for her own power trip. I wish Judge Mark Kennedy had continued as chairman of the party and he had never given it up to Nancy and formed his own, short-lived alternative. I think our party would be in a much better place. I believe much more could have happened in 2018. No, I don't believe we could have knocked out the supermajority, but we could have made meaningful gains. Two seats in North Alabama that I am very familiar with, could have easily been won by Democrats. Then, folks like Craig Ford left the party when they were involved in disagreements with Nancy. Becoming an independent caused him to lose election in 2018 and we no longer have his voice. There are some who are rising up in the party who may be willing to fight, like Tabitha Isner of Montgomery, who is opposing Nancy for chairwoman, and Vivian Figures of Mobile, who is never afraid to tell it like it is. Maybe I'm too naive, but I have a glimmer of hope left.