Only the Pigeons, Or A COVID Christmas 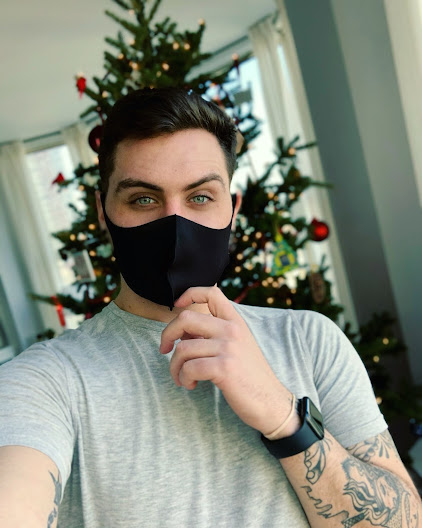 On Monday, I was reading a Washington Post opinion piece by Kay Collier McLaughlin, a leadership consultant, author, and retired religious journalist from Kentucky, titled “From a long ago sermon, a joyful message for this troubled season.” In the piece, she tells a story about a sermon by a good friend of hers. Here is the story the priest told as McLaughlin remembers it:

That sermon, as I recall (having failed to locate the cut sheets of newsprint containing the actual words), was about his friend Phil, an American priest who was serving in Guatemala. While the bulk of the story is no longer with me, the memorable line came after a vivid description of Phil climbing steep, narrow steps to the very top of a bell tower and finding there that local artisans had painted intricate designs “where only the pigeons would see.”

McLaughlin's primary focus is the holiday season during the COVID-19 pandemic and the social distancing mandates that are in place in most parts of the country. If government guidelines are followed, we won’t have any large family gatherings or holiday parties. No one will drop-in to wish us a Merry Christmas. On November 23, I wrote a post saying, “I won’t be going home. I doubt I will even decorate for Christmas here. I rarely do since I am not usually here for Christmas, but even though I will be alone in Vermont this year, I just feel it is a waste of money to decorate just for me.” After reading McLaughlin’s piece, I agreed with her sentiment of wanting to shout, “Only the pigeons! Only the pigeons!”

One of the commenters on the McLaughlin piece wrote that Notre-Dame Cathedral had been renovated numerous times over the centuries. During the Middle Ages, all parts of a cathedral were decorated or carved, including the roof. The roof was not decorated for those who could see it, but it was done because God could see it. On that November 23rd post, Patrick wrote, “You should put up a small tree for you and Isabella, and at least she will be happy you are spending Christmas with her.” VRC-Do You! also commented and said, “Yes, it is only you and Isabella but at least put up something that screams CHRISTMAS. Maybe a nice poinsettia. I love Christmas. Not the commercial aspect of it but the colors, lights, and decorations, and smells.” Chris commented as well to say, “As one who has spent many a holiday alone, I did buy a small tree (when I lived in Germany) that I haul out -- it is only decorated in fruit, but it is a small reminder of the holiday -- which you should celebrate in at least a small way. Issy will enjoy having something new around to play around.”

After the advice I received, I did put up a small tree. No one else will see it, though all of you saw it in a picture on this blog. It made my apartment a little more festive. Isabella has enjoyed it. She’s knocked off a couple of the balls I hung on the tree. Thankfully, the balls are shatterproof. She batted them around a bit and has spent some time sitting near the tree, admiring the lights. She does seem happy that I am home this holiday, though I’m not sure she understands the time of the year and that I am usually gone away at Christmas, but she’s always glad when I am here. So, Isabella and I have enjoyed the few decorations I put up, and I put the tree in the front window so that it’s lights can be seen from the street below.

On Monday, my boss stopped by my apartment. He didn’t knock, nor did he ring the doorbell. He just quietly set a Christmas present by my door and left. He texted me later to tell me it was there. It was very kind of him. I also bought a few presents for myself and wrapped them (the packages I wrapped are much prettier than the one he wrapped, but I am gay after all and love wrapping beautiful presents). I saw an interesting new way of wrapping gifts and wanted to try it out. Otherwise, I might not have wrapped the presents I bought. I think they look lovely under the tree.

Here are the gifts I wrapped. Here is a link to other videos with gift wrapping ideas. 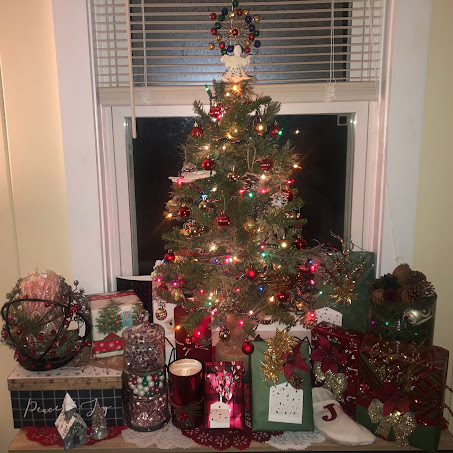 Looks lovely Joe hope you and Isabella have a very happy Christmas and hopefully better days are still to come.
Best wishes
Patrick

As I like to say, "It's going to be a Merry Christmas after all."

That pile of presents is very impressive. My brother and I probably won't have more for the two of us.

HAVE A MERRY CHRISTMAS. TAKE CARE BE FESTIVE FOR YOURSELF!