Each evening during this time of year when I walk outside I am overwhelmed by the beautiful sweet smell that flows on the breeze and envelopes the sky.  The smell is that of wild honeysuckles which grow on the fence around the side of my house. There may be many things that I don’t like about the South, but the smell of wild honeysuckle in late spring is something that I will always love and cherish.

The Wild Honey-Suckle by Philip Freneau

Fair flower, that dost so comely grow,
Hid in this silent, dull retreat,

By Nature's self in white arrayed,
She bade thee shun the vulgar eye,
And planted here the guardian shade,
And sent soft waters murmuring by;
Thus quietly thy summer goes,
Thy days declining to repose.

Smit with those charms, that must decay,
I grieve to see your future doom;
They died--nor were those flowers more gay,
The flowers that did in Eden bloom;
Unpitying frosts, and Autumn's power
Shall leave no vestige of this flower.

From morning suns and evening dews
At first thy little being came:
If nothing once, you nothing lose,
For when you die you are the same;
The space between, is but an hour,
The frail duration of a flower.

In the picture above, the model is not holding honeysuckle, but it’s the closest thing I could find. 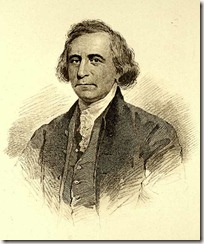 New York City, grad. Princeton, 1771. During the American Revolution he served as soldier and privateer. His experiences as a prisoner of war were recorded in his poem The British Prison Ship (1781). The first professional American journalist, he was a powerful propagandist and satirist for the American Revolution and for Jeffersonian democracy. Freneau edited various papers, including the partisan National Gazette (Philadelphia, 1791-93) for Jefferson. He was usually involved in editorial quarrels, and, influential though he was, none of his papers was profitable. His political and satirical poems have value mainly for historians, but his place as the earliest important American lyric poet is secured by such poems as "The Wild Honeysuckle," "The Indian Burying Ground," and "Eutaw Springs."

Ah, honeysuckle! I remember huge bushes of it growing around our house in NC. I loved picking the flowers and snapping off the base of the flower and sucking out the sweet nectar. I still love the smell of that lovely plant!
Perfect post! Thanks.
Peace <3
Jay

...don't know if it's funny or actually logical for me, but my first association with honeysuckle is textual - Faulkner's The Sound and the Fury, and Quentin obsessing over Caddy... Just had to dig up this quote:

Jay, I love the smell of honeysuckle as well.

Chris, I've read some Faulkner, but I have never read The Sound and the Fury. Going to school in Mississippi, my English classes always made us read Faulkner and Welty. I never liked either one. Tennessee Williams is a totally different story, I love him. That's a great quote though.