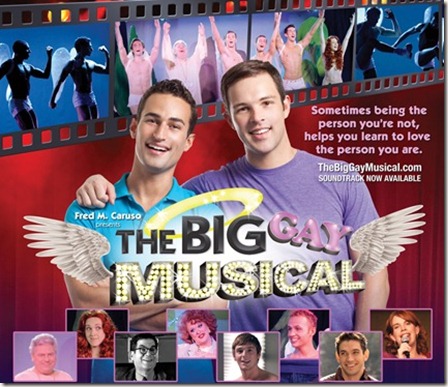 This weekend, Netflix sent me The Big Gay Musical.  I’ve been wanting to see it for a while, but I only recently was able to convince Netflix of my new address.  I’m loving my Netflix again.  But that is beside the point.  The Big Gay Musical was directed by Casper Andreas, a gay Swedish director, who has made several gay films that I have seen.  After seeing Andreas’s other films, truthfully, I didn’t have much hope for this one.  Not that the movies are awful, they were entertaining, just not great gay cinema.  At least in my opinion.

The Big Gay Musical blew me away though.  The plot is fairly simple.  Paul and Eddie have just begun previews for the new Off-Broadway musical "Adam and Steve: Just the Way God Made 'Em." Their lives strangely mirror the characters they are playing. Paul is looking for the perfect man and Eddie is dealing with how his sexuality and faith can mix. After yet another disastrous dating experience, Paul has an epiphany. He is done dating and just wants to be a slut like the sexy chorus boys that share his dressing room. Eddie has to tell his parents that he's gay and is starring in a show that calls the bible the "Breeder's Informational Book of Living Examples". Eddie comes out to his family and Paul goes on Manhunt. Eddie's parents are destroyed by the news and Paul can't even have a good one-night stand. But after musical numbers with scantly clad tap dancing angels, a retelling of Genesis, televangelists, a camp that attempts to turn gay kids straight, and a bunch of show tunes.
Here are two clips:
1. “I Wanna Be A Slut” - The Big Gay Musical
2.  “Sing Me a Love Song - The Big Gay Musical
The reason for this post is because in last Thursday’s post, Are Gay Guys Obsessed with Sex?, I got a lot of responses that made think.  (Thanks to all those who commented.)  A lot of us seem to have gone through a slutty phase, but have since calmed down.  The two clips above featuring Daniel Robinson as Paul/Adam, struggling with the same issue.  Some have always been looking for love and still searching, but have yet to find it. I am much the same way, I have always been looking for someone to love and spend my life with, but I am still lonely.  Too often the guy I have tried to date either don’t want someone with intelligence, have an image of a guy they want, or just want a one night stand.  At times, I have been horny enough to go for #3, but I usually don’t fit the other two.  Oh well, the search continues. 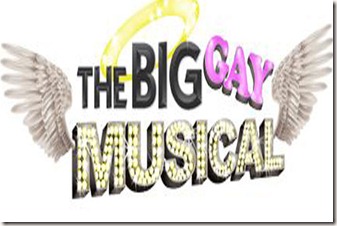 Watch The Big Gay Musical.  It’s a fun and feel-good movie.  Have any of you seen it already?

I watched this on Netflix a year ago - amazing! The lead is a total hottie too.

Joe: In our stereotypical, black vs. white world, aren't all musicals big and gay? :-)

We need to see a macho musical, full of masculine men who still appreciate a good show tune.

Jay, it really is well worth watching.

FOC, yeah, they are, but that's why I love musicals so much.