Khwāja Šamsu d-Dīn Muḥammad Hāfez-e Šhīrāzī, known by his pen name Hāfez (1325/26–1389/90) was a Persian lyric poet. His collected works composed of series of Persian poetry (Divan) are to be found in the homes of most Iranians, who learn his poems by heart and use them as proverbs and sayings to this day. His life and poems have been the subject of much analysis, commentary and interpretation, influencing post-Fourteenth Century Persian writing more than any other author
Despite his profound effect on Persian life and culture and his enduring popularity and influence, few details of his life are known. Accounts of his early life rely upon traditional anecdotes. Early tazkiras (biographical sketches) mentioning Hafez are generally considered unreliable. The preface of his Divān, in which his early life is discussed, was written by an unknown contemporary of Hafez whose name may have been Moḥammad Golandām.
Modern scholars generally agree that Hafez was born either in 1315 or 1317; following an account by Jami 1390 is considered the year in which he died. Hafez was supported by patronage from several successive local regimes: Shah Abu Ishaq, who came to power while Hafez was in his teens; Timur Lang (Tamerlane) at the end of his life; and even the strict ruler Shah Mubariz ud-Din Muhammad (Mubariz Muzaffar).

Ghazl No. 10 from the Divan of Hafiz 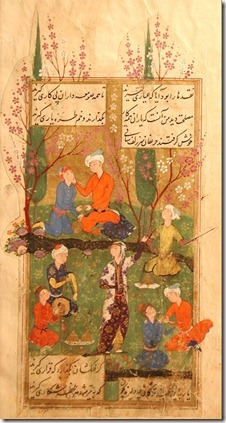 His mop of hair tangled, sweating, laughing and drunk,
Shirt torn, singing poems, flask in hand,
His eyes spoiling for a fight, his lips mouthing “Alas!”
Last night at midnight he came and sat by my pillow.
He bent his head to my ear and said, sadly,
“O, my ancient lover, are you sleeping?”

The seeker to whom they give such a cup at dawn
Is an infidel to love if he will not worship the wine.
O hermit, go and do not quibble with those who drink the dregs,
For on the eve of creation this was all they gave to us.
What he poured in our cup we drank,
Whether the mead of Heaven, or the wine of drunkenness.

The cup’s smile and the wine boy’s knotted curl
Have broken many vows of chastity, like that of Hafiz.


A variation on the interpretation of E.T. Gray, Jr.
in The Green Sea of Heaven, White Cloud Press, 1995.
http://www.gay-art-history.org/gay-history/gay-literature/gay-poetry/hafiz-i-shirazi-wine-boy-ghazal/Hafiz.htm

Thanks, Jay. There are some wonderful Middle Eastern poets, and a surprising number of them write about love between men.

Love this post on so many levels -- learning of an ancient culture, artist and his work -- and damn, it is hot to boot. Thanks man for doing the research, and sharing this with us. You are awesome.

Thank you, Loki. I'm very glad you enjoyed it.