Urge your member of Congress to save Teaching American History Grants and many other vital education programs:
Legislation has been introduced in the House of Representatives that would eliminate the Teaching American History (TAH) grants program at the U.S. Department of Education.  We urge you to contact your Member of Congress immediately to oppose this bill. The bill (H.R. 1891), the "Setting New Priorities in Education Spending Act," would terminate 43 K-12 federal education programs.  Click on the link for a PDF that outlines those cuts.
The President's fiscal year 2012 budget request for the Department of Education would eliminate Teaching American History grants (TAH) as a separately funded program.  However, the Administration proposed consolidating history education into a new program called Effective Teaching and Learning for a Well-Rounded Education. This reflects the President's Elementary and Secondary Education Act (ESEA) reauthorization proposal, the Blueprint for Reform that was released in March 2010.
Teaching American History grants is the only federal program that funds K-12 history education.  Its elimination would exacerbate the problem of local school districts deemphasizing history in their curriculum because it is not the focus of high-stakes testing.
The House Education and the Workforce Committee is expected to consider H.R. 1891 at any time. It is important that you contact your Member of the House of Representatives TODAY, to urge them to oppose this bill.
The Alliance has set up a template message for you to customize. We strongly encourage you to personalize this message by telling Congress why TAH programs are important to you, your institution, your field, your state, and/or district. Take Action
There are many other programs listed that do not need to be cut.  With the economy and cuts in education on the state level, why would the federal government do more to damage American education.  We are already behind many other nations in education.  We need to find a program that works to enhance education, not defund it.  I am not the first to admit that “No Child Left Behind”  (NCLB) is a total failure, but something needs to be done.  The government states that the “OMB’s 2004 PART evaluation found no demonstrated results from the program” which I don’t believe.  When I was in graduate school, this grant funded a lot of great programs for teacher education, National History Day, etc.  These were programs that promoted history education.  What results were they looking for?  I can’t answer that, and more than likely, neither can they.
The TAH program is designed to raise student achievement by improving teachers' knowledge and understanding of and appreciation for U.S. history. The purpose of these grants is to promote the teaching of traditional American history in elementary and secondary schools as a separate academic subject. 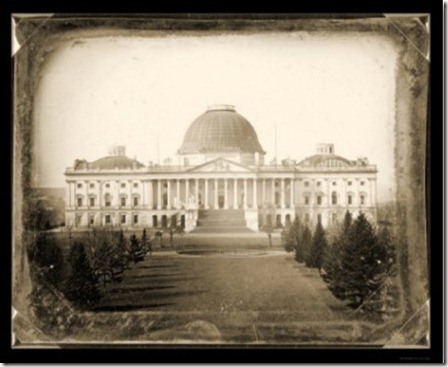 A daguerreotype of the US Capitol, Washington DC, taken in 1846

Many important subjects, such as history, civics, geography, and foreign languages have received less classroom time.  As a result, our children are growing up with diminished knowledge and understanding of our nation's history. To fulfill its obligations and take advantages of its privileges, citizenship requires knowledge of America's past. As a nation, we cannot afford to ignore our responsibility to provide high-quality history education to all our students.
By eliminating the Teaching American History grants program, Congress will be repeating the mistakes of NCLB and cutting off the only federal funding for K-12 history education.  The program works: evaluations of TAH programs show a clear increase in participating teachers' content knowledge and skill in teaching history.
By the way, this is on a side note to this, but have you seen this story: Meet Amy Myers.  I think it is great that students are taking a keen interest in politics, civics, and US history I do have one problem with this young girl, and that is I do not like it when kids think they are smarter than adults.  I have a couple of students who like to challenge me in class, now it is one thing to do so in the pursuit of knowledge, it is another to try an show off your intellect at the expense of others.  I have never actually had a student that I wasn't able to show that I was right and though much of history is about interpretation, they are not looking at the full picture.  Teenagers often don't know the vast extent of what they don't know.  Now saying that, Amy Myers probably can beat Michelle Bachmann in a debate or history quiz, to me it is still a little presumptuous of her and somewhat disrespectful.  I also have a suspicion that this was not her idea and that she was put up to it by an adult with a particular political agenda.  Then again, that is my opinion.
Now the reason I brought this up is because Miss Myers wrote to Congresswoman Bachmann and did not get a response.  I have written to my Representatives before and though I always get a response from my senior Senator,  I only occasionally get a response from my junior Senator.  However, I have yet to ever get a response from my Representative in the House, no matter who it was or what his/her political affiliation was.  I just wonder if it is common not to hear form your congressional representatives?  Do any of you write to your representatives in Congress?  Do you get a response?  Does it have to do with staff size, or what?  I would love to hear your input on this.

I don't even get responses from my state legislators. Of course, I suspect all any of them get is a synopsis of what constituents write in about, and stats on the their stances. To get a letter back means they are senior enough to warrant a coorespondence secretary because they are ensconced (for better or worse) and have less need for an extra spin doctor or campaign worker).

I will write, who knows, we might make a difference!

Jay, it just drives me crazy. They are there to represent us, not ignore us. They get free postage for God sakes! Besides, I would have a staff member right a short memo for every bill that I was expected to vote on and send that out. With today's technology it isn't that freakin' hard to do. At the very least they should send an email or some type of notification that they received your letter. What's worse is when the Senators who actually respond send a form letter thanking you for your support of something that your wrote to them about that you disagree with them on. I have one Senator who is very good at answering letters, at least somewhat personally; the other one is an all around idiot and I don't expect much from him.

Miky, politics is politics. I don't think it matters where you live, they are all the same. Except with totalitarianisms, where they just make you disappear if you disagree.

Miky, oh how I wish I were in Italy. Your country is one of my favorite places in the world, not to mention it's one of my major research interests.

I also love my Country, a lot!!! But i also dreamed about U.S.A.! Unfortunately we don't have great politicians at this moment... We need a sort of italian Obama...

Miky, I agree that Berlusconi is not Obama, but Obama (in my opinion) is not all he is supposed to be. There have been a few things he has done for LGBT rights, but not nearly enough and he could do so much more. Check out this link: http://www.edenfantasys.com/sexis/sex-and-society/obama-lgbt-112092/.

Joe, i know that, but i immagine (i'm not american) tha Obama once elected rushed into many opposite lobbies... I also think it would be worse with Mrs. Clinton, don't you think so? However, it would be a dream also an half-Obama in change of Mr. Berlusconi here... :)

Miky, yes Obama did run into a lot of opposite lobbies, but he had a Democratic Congress that could push through healthcare "reform" and he had the chance to do more and he drug his feet. As for Mrs. Clinton, I did think she had more experience and she's one tough bitch (I use that term respectfully), and truth be told, that is who I supported. One thing I can say about Mr. Berlusconi is that he keeps politics interesting, but from all I have seen about Italian politics, it is usually pretty interesting and crazy, but I know Italians would like it to be a bit more normal.

Hahaha, yes noe politic is less boring in Italy... Alos for world's leaders when meet him during international meetings... About Mrs. Clinton i must hear from you, because we don't konw very much about your internal politic, as you don't know so much about our internal politic... ;)
At the end, we love our Countries, tha's important! :)