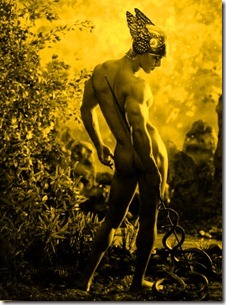 The picture and text are courtesy of Celt Eros: The mystique - imagined or real - of the Celtic male and Celtic culture appeals to many worldwide. The constructs of this culture, both ancient and modern manifestations, are alluring.  CeltEros is about sharing and spreading appreciation for the Celtic ethos, mythos and importantly - eros.

That's really interesting. I never knew about this aspect of Mercury's story. I have a Mercury tattoo on my right shoulder that I got because I'm a Virgo and Mercury is the astrological ruler for that sign, so I'm always interested in learning more about him. Thanks for this post!

I, for one, am properly honoring this month and Mercury on a regular basis!

Ace, I am glad you liked the post. I came across this and found it fascinating. I didn't really know that aspect of the Mercury story either, but I did some research to back it up and lo and behold, it was true (at least mythically, LOL).