Moment of Zen: The Rapture 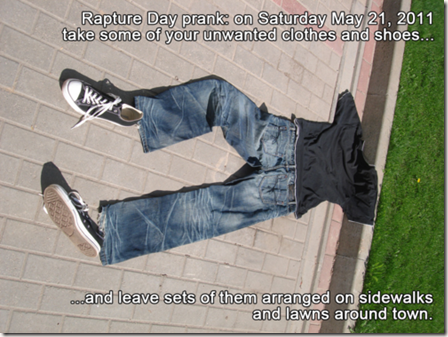 It's a complicated business calculating the precise date of the end of the world. There's the Great Flood to consider, which may have happened around 4990BC, depending on who's estimating. And the timing of the exodus of the Jews from Egypt. Then there's a bit of math that involves equating one day to 1,000 years.
Do all that and it turns out that Armageddon will begin at 6pm on Saturday. That is, if Harold Camping has got his calculations and his reading of the Book of Ezekiel right.

The 89-year-old doomsday prophet, a former engineer, has prompted a tide of expectation, elation and derision after persuading listeners to his Family Radio Worldwide across the US and as far away as the Philippines to sell up everything and prepare for the beginning of the end of the world with the second coming of Jesus.

If all goes according to plan, those who have been "saved" by Jesus will rise into the air in the Rapture and look down as God smites billions of nonbelievers with a great earthquake rolling from city to city across the planet, and a bit of fire to boot.

Judgment day will begin at 6pm wherever you are. The mayhem will move west over the planet, wiping out cities, towns and villages.

In the US, some believers have given up their jobs and donated money they think they will no longer need to pay for more than 2,000 billboards across the country proclaiming "Judgment Day: May 21, 2011 – Cry mightily unto God. THE BIBLE GUARANTEES IT!"

Camping previously predicted that the end of the world would be in 1994. He blames that on an error in the math but says he has it right this time. "There is no possibility that it will not happen because our information comes from the Bible," he told the Philadelphia Daily News.

Besides his mathematical formula, Camping has conjured up more "evidence" that doomsday looms. He has pointed to the re-establishment of Israel – which some Christians believe is a prerequisite for the second coming of Jesus and the Rapture – as a sign from God "that the world is getting near its end". He has said that the earthquake and tsunami in Japan were a divinely organized foretaste of what awaits most of humanity.

Camping has also said that "gay pride" and same-sex marriage are "a sign from God that judgment day is very near". "No sign is as dramatic and clear as the phenomenal worldwide success of the Gay Pride movement. In the Bible God describes His involvement with this dramatic movement … We will learn that the Gay Pride movement would successfully develop as a sign to the world that Judgment Day was about to occur," he writes.


I, for one, will be standing outside when 6pm comes today.  I don’t want to hit my head on my way to heaven, LOL. This will also be my last post if the Rapture occurs;  so I will say goodbye to you all and will say hello again once we are in Heaven together.

Though this post is done with humor, Harold Camping does believe he has predicted the end of the world, which will actually come five months after the “Rapture” on October 21, 2011.  I am a Christian, and I tend to believe the Bible:


But of that day and hour knoweth no man, no, not the angels of heaven, but my Father only.


Heaven and earth will pass away, but my words will never pass away.  But of that day and that hour knoweth no man, no, not the angels which are in heaven, neither the Son, but the Father.

Therefore. I just can’t take these predictions seriously.  I also don’t believe in a literal “rapture” as described by those who say we will be flown up into heaven.


Some notable rapture predictions include the following:

It's 19.09 here and life goes on. I had hoped the fundies might indeed have been swept aloft and out of our lives, but no such luck. We're stuck with them.

I tend to agree with you, Joe. As a Christian, I take the literal with a grain of salt. Once again, one person (or a group of people) have taken one verse or section, and twisted it to their own wants/needs, completely ignoring the other verses that you cite. I have to wonder what all those broke people are going to do on Monday, and how he will explain it away this time! I mean, cmon folks, scientific calculators ought to make the math easy!
Peace <3
Jay

Joe: I'm not sure I understand why people have to sell everything -- they can't take the money with them to heaven. And I don't understand why they have to give their stuff away either.

VS, I'm still here, but it might have been nice to get rid of some fanatics.

Jay, you'd think they could do the math, especially since the guy was an engineer. Oh well, who knows what the fanatics will do next. Jack Van Impe has been predicting the end of times for decades now. He has yet to be right.

FOC, I don't know. Fanatics do crazy things. Think about the cult that thought aliens were going to take them away in a comet a few years ago. They all dressed identically and took the same poison dying and not going to the comet. The only advice I have is "Don't drink the Kool-Aid!"

You mean when they are raptured, we'll see their NAKED bodies rising, leaving their clothing on the ground?

Since I doubt that many good-looking young men will be raptured, I am not looking forward to those fundamentalist bodies!

Uncutplus, I do hope they get to keep their clothes. Though I don't think we have to worry. I doubt that very many of those fundamentalists would be raptured.