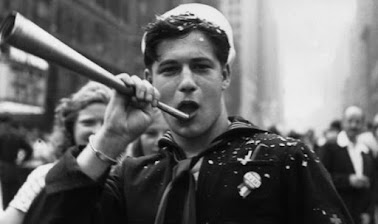 It started 81 years ago yesterday with the German invasion of Poland and ended 75 years ago today with Japan signing the Instrument of Surrender. World War II was the bloodiest conflict in human history. The world breathed an enormous collective sigh of relief. Celebrations broke out across the free world as a result of the war finally and truly being over. The dark war years gave birth to a new, optimistic future as the world looked hopefully towards an existence without world wars and massive human suffering.

Seventy-five years ago today, the formal ceremonies marking Japan's surrender, took place aboard the USS Missouri. Early on Sunday, September 2, 1945, aboard the new 45,000-ton battleship USS Missouri and before representatives of nine Allied nations, the Japanese signed their surrender. At the ceremony, General Douglas MacArthur stated that the Japanese and their conquerors did not meet "in a spirit of mistrust, malice or hatred but rather, it is for us, both victors and vanquished, to rise to that higher dignity which alone benefits the sacred purposes we are about to serve."

Despite these words, none of the high-ranking officers saluted any of the Japanese delegates. General Carl A. Spaatz later revealed that US planes had been ready with bombs to halt any last-minute treacherous act by Japan. Seeing a deck full of high-ranking Allied officers on the USS Missouri might have presented a tempting target for a final suicide attack.

Why was the USS Missouri chosen as the location for the Japanese surrender to take place? After all, the battleship had served for less than a year in the Pacific War. It was the last battleship commissioned into the United States Navy, although not the last laid down.  The Missouri participated in several operations in the last year of the war, including the bombardments of Iwo Jima, Okinawa, and Japan. For the rest of the time, she escorted US carrier groups, protecting them from attacks. In May 1945, the Missouri became the flagship for Admiral Bull Halsey's 3rd Fleet. In this capacity, Missouri led the Allied armada that entered Tokyo Bay on August 29, 1945.

Numerous distinguished ships were present at the surrender. The USS South Dakota had perhaps the most illustrious record among the battleships, having served in the Pacific theater since 1942. The USS West Virginia had survived Pearl Harbor. The HMS Duke of York and the HMS King George V each had sunk a German battleship (the Scharnhorst and the Bismarck, respectively). The Japanese ship HIJMS Nagato and a few other Japanese ships were also present. The ships most responsible for the Allied victory over Japan, the fleet carriers of the US Navy, remained at sea during the surrender, in effect guaranteeing Japanese compliance.  The single most deserving ship, USS Enterprise, had suffered kamikaze damage late in the war and was off the coast of Washington state.

So, why the Missouri, a ship that had a respectable but not particularly distinguished war record? The quickest answer is that she was the Third Fleet's flagship and that it made the most sense to have the surrender ceremony on the flagship. Also, President Harry S Truman had a personal connection with the ship. His daughter, Margaret, had christened the hull at its launching, and Truman hailed from Missouri, which is the likely reason for the ship being chosen. It is also worth noting that Missouri had more available deck space than most of the other options.

With the USS Missouri in Tokyo Bay as the setting, the Japanese representatives signed the official Instrument of Surrender, prepared by the War Department, and approved by President Truman. It set out in eight short paragraphs the complete capitulation of Japan. The opening words, "We, acting by command of and in behalf of the Emperor of Japan," signified the importance attached to the Emperor's role by the Americans who drafted the document. The short second paragraph went straight to the heart of the matter: "We hereby proclaim the unconditional surrender to the Allied Powers of the Japanese Imperial General Headquarters and of all Japanese armed forces and all armed forces under Japanese control wherever situated." 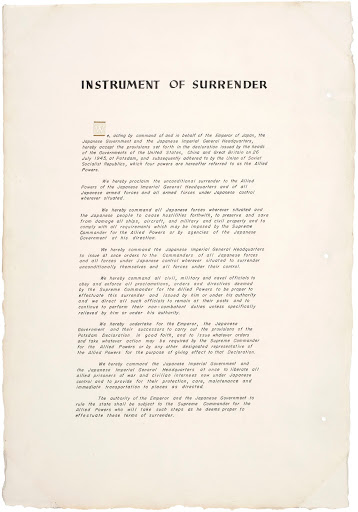 The Japanese envoys Foreign Minister Mamoru Shigemitsu and General Yoshijiro Umezu signed their names on the Instrument of Surrender. The time was recorded as 4 minutes past 9 o'clock. Afterward, General Douglas MacArthur, Commander in the Southwest Pacific and Supreme Commander for the Allied Powers, also signed. He accepted the Japanese surrender "for the United States, Republic of China, United Kingdom, and the Union of Soviet Socialist Republics, and in the interests of the other United Nations at war with Japan."

After the formal surrender, investigations into Japanese war crimes began quickly, and many members of the imperial family pressured Emperor Hirohito to abdicate. However, at a meeting with the Emperor later in September, General MacArthur assured him he needed his help to govern Japan, and so Hirohito was never tried. Legal procedures for the International Military Tribunal for the Far East were issued on January 19, 1946, without any imperial family member being prosecuted. Following the signing of the instrument of surrender, several other surrender ceremonies took place across Japan's remaining holdings in the Pacific from September 2-12.

The logistical demands of the surrender were formidable. After Japan's capitulation, more than 5.4 million Japanese soldiers and 1.8 million Japanese sailors were taken prisoner by the Allies. The damage done to Japan's infrastructure, combined with a severe famine in 1946, further complicated the Allied efforts to feed the Japanese POWs and civilians. It was not until 1947 that all prisoners held by the United States and Great Britain were repatriated. As late as April 1949, China still held more than 60,000 Japanese prisoners.

The state of war between most of the Allies and Japan officially ended when the Treaty of San Francisco took effect six and a half years later on April 28, 1952. Japan and the Soviet Union formally made peace four years later, when they signed the Soviet–Japanese Joint Declaration of 1956.

In his speech announcing the signing of the Instrument of Surrender, Truman honored the sacrifices made during the war:

Our first thoughts, of course -- thoughts of gratefulness and deep obligation -- go out to those of our loved ones who have been killed or maimed in this terrible war. On land and sea and in the air, American men and women have given their lives so that this day of ultimate victory might come and assure the survival of a civilized world. No victory can make good their loss.

We think of those whom death in this war has hurt, taking from them fathers, husbands, sons, brothers, and sisters whom they loved. No victory can bring back the faces they long to see.

Only the knowledge that the victory, which these sacrifices have made possible, will be wisely used can give them any comfort. It is our responsibility – ours, the living – to see to it that this victory shall be a monument worthy of the dead who died to win it.

Indeed, we should never forget the sacrifices of the men and women who died in the Second World War.