Actor Wil Wheaton, known for his role as Wesley Crusher on Star Trek: The Next Generation, welcomed pride month this weekend by giving a special shout-out to his LGBTQ+ fans. Wheaton, who is now 48, took to Facebook to publicly acknowledge the number of Star Trek fans that had a crush on the actor–or his character–during the show’s run. 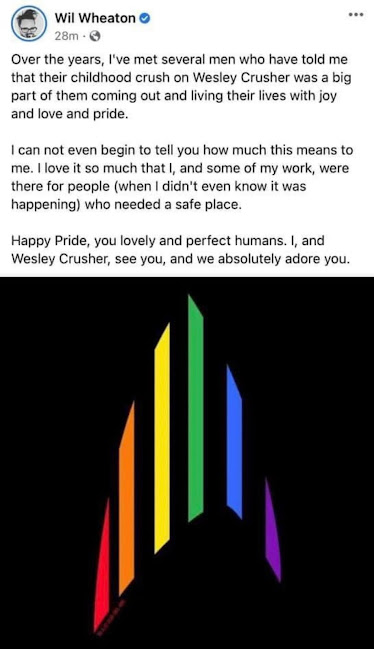 “Over the years, I’ve met several men who have told me that their childhood crush on Wesley Crusher was a big part of them coming out and living their lives with joy and love and pride,” Wheaton wrote. “I can not even begin to tell you how much this means to me. I love it so much that I, and some of my work, were there for people (when I didn’t even know it was happening) who needed a safe place.”

As a Star Trek fan, I certainly had a crush on Wesley Crusher, but the character that really made my hear go pitter patter was Dr. Julian Bashir (portrayed by Alexander Siddig) on Star Trek: Deep Space Nine. Bashir has sometimes been referred to as a twink, although his character began the series in his late thirties. He obviously caught the eye of the station’s resident Cardassian tailor, Elim Garak (portrayed by Andrew Robinson). Dr. Bashir was always handsome in the series, in particular, I always loved the episode “Rivals” because of the skintight suit Bashir wears while playing racquetball.

I had crushes on other Star Trek characters as well. On Star Trek: Voyager, I had a thing for Tom Paris played by the ever-handsome Robert Duncan McNeill. Enterprise had Commander “Trip” Tucker portrayed by Connor Trinneer who seemed to spend half the series in his underwear and boy did he look good in his underwear. With Star Trek: Discovery, we now have actual gay characters, who are all surprisingly played by gay actors, to lust after. I am looking forward to the upcoming Star Trek: Strange New Worlds to see actor Ethan Peck, the grandson of actor Gregory Peck, who will be playing Spock. Peck previously played Spock during the second season of Discovery.

I was not a Star Trek fan but did enjoy looking at Wil Wheaton back in the day. He was HOT!

On a different note, I just made a post on my blog about Andrew Neighbors (@andrewgoesplaces) on Instagram, his dog Arbor has been missing since Saturday. I'd appreciate it if you would consider sharing the post to help get the word out.

Jeremy, thanks for letting me know about this, and I just posted about it. I hope someone finds Arbor.

As an all time Trekkie I too had some «feelings» for all those cute Star Trek characters.

This gay appearences on some Star Trek shows of movies are just in phase with Gene Roddenbury who was a pioneer in human rights.
In the original series he did put the frist interacial kiss between O'Hura and Capt Kirk.
He also put outfront some sexual «mono gender» civilisations in some episodes.

The evolution of having same sex character was put very more in evidence in the last «Discovery»
serie as you mentionned here.

Slow evolution that shows that in USA mentaliries are «slowly» evolving.

There have been other shows that did show gay guys as Will and Grace but not always as «normal» life gays but a somewhat «clownesque» funny characters.

Queer as Folks was also another better example that did help to show gay life in a real way.