A Christmas Carol
by George Wither So now is come our joyful feast,
Let every man be jolly;
Each room with ivy leaves is dressed,
And every post with holly.
Though some churls at our mirth repine,
Round your foreheads garlands twine,
Drown sorrow in a cup of wine,
And let us all be merry.

Now all our neighbors' chimnies smoke,
And Christmas blocks are burning;
Their ovens they with baked meats choke,
And all their spits are turning.
Without the door let sorrow lie,
And if for cold it hap to die,
We'll bury it in a Christmas pie,
And evermore be merry.

Now every lad is wondrous trim,
And no man minds his labor;
Our lasses have provided them
A bagpipe and a tabor.
Young men and maids, and girls and boys,
Give life to one another's joys;
And you anon shall by their noise
Perceive that they are merry.

Rank misers now do sparing shun,
Their hall of music soundeth;
And dogs thence with whole shoulders run,
So all things aboundeth.
The country-folk themselves advance,
For crowdy-mutton's come out of France;
And Jack shall pipe and Jill shall dance,
And all the town be merry.

Ned Swatch hath fetched his bands from pawn,
And all his best apparel;
Brisk Nell hath bought a ruff of lawn
With droppings of the barrel.
And those that hardly all the year
Had bread to eat or rags to wear,
Will have both clothes and dainty fare,
And all the day be merry.

Now poor men to the justices
With capons make their errands;
And if they hap to fail of these,
They plague them with their warrants.
But now they feed them with good cheer,
And what they want they take in beer,
For Christmas comes but once a year,
And then they shall be merry.

Good farmers in the country nurse
The poor, that else were undone;
Some landlords spend their money worse,
On lust and pride at London.
There the roisters they do play,
Drab and dice their land away,
Which may be ours another day;
And therefore let's be merry.

The client now his suit forbears,
The prisoner's heart is eased;
The debtor drinks away his cares,
And for the time is pleased.
Though others' purses be more fat,
Why should we pine or grieve at that;
Hang sorrow, care will kill a cat,
And therefore let's be merry.

Hark how the wags abroad do call
Each other forth to rambling;
Anon you'll see them in the hall,
For nuts and apples scrambling;
Hark how the roofs with laughters sound,
Anon they'll think the house goes round;
For they the cellar's depths have found,
And there they will be merry.

The wenches with their wassail-bowls
About the streets are singing;
The boys are come to catch the owls,
The wild mare in is bringing.
Our kitchen boy hath broke his box,
And to the dealing of the ox
Our honest neighbors come by flocks,
And here they will be merry.

Now kings and queens poor sheep-cotes have,
And mate with everybody;
The honest now may play the knave,
And wise men play at noddy.
Some youths will now a mumming go,
Some others play at rowland-hoe,
And twenty other gameboys moe;
Because they will be merry.

Then wherefore in these merry days
Should we, I pray, be duller?
No, let us sing some roundelays
To make our mirth the fuller.
And whilst we thus inspired sing,
Let all the streets with echoes ring;
Woods, and hills, and everything
Bear witness we are merry. 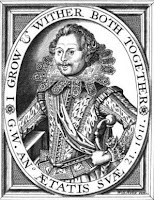 George Wither, (1588–1667), poet and pamphleteer. His satires Abuses Stript and Whipt, published 1613, in spite of the innocuous character of their denunciations of Avarice, Gluttony, and so forth, earned him imprisonment in the Marshalsea. There he wrote five pastorals under the title of The Shepheards Hunting, a continuation of The Shepheard's Pipe, which he had written in conjunction with William Browne, the ‘Willie’ of these verses. His Fidelia appeared in 1617 and again, with the famous song ‘Shall I, wasting in despair’, in 1619; it was this song, printed by Percy in his Reliques, that was to rescue Wither's reputation from a century of neglect.


In 1622 appeared Faire-Virtue, the Mistresse of Phil'arete, a long sequence of poems in various verse forms in praise of his semi-allegorical mistress. From this time Wither's poetry became increasingly religious and satirical in tone, which led to accusations that he was a Puritan, and his portrayal as ‘Chronomastix’ in Jonson's masque Time Vindicated (1623). He published The Hymnes and Songs of the Church in 1623, a poem on the plague in 1628, a book of Emblems in 1634–5, and Heleluiah in 1641.

Wow! Another gem of history laid before us to enjoy!! You resources are endless, JoeBlow....and we all say THANKS!!!

I really enjoyed this one. Thanks!
Peace <3
Jay