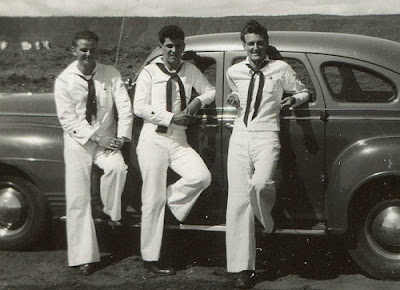 It began as an ordinary December day. People were gathered around the radio listening to a football game or planning holiday parties, not girding for battle. But on Dec. 7, 1941, when the first Associated Press report came over the radio at 2:22 p.m. Eastern Standard Time of a “bombing in Hawaii,” the news was electrifying. Seventy years later, every American living now who heard it then can still tell you exactly what he was doing when he learned of the Japanese attack on Pearl Harbor. 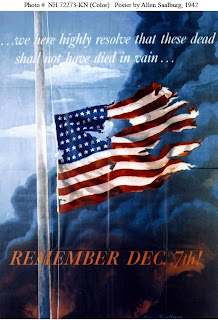 My grandmother will never forget that day seventy years ago. Her first child died of pneumonia on that day. She came home from the hospital to turn on the radio just as they were announcing the bombing of Pearl Harbor. Not only had she just lost her baby, but also, she realized that she would soon lose her husband to the war as well. My grandfather fought in WWII and luckily he safely returned, and they had two more children, my father and my aunt.

Pearl Harbor marked a watershed in the nation’s history and we knew it. What came after would be very different from what came before. It was the war that changed the world. “The Day of Infamy” thrust us into a conflict more than four years long that altered nearly every aspect of American life, large and small - from rationing gas and sugar to the harnessing of atomic power to the new role of women in the workplace. We united to defend our democracy. For more than 400,000, it would be the ultimate sacrifice.

Yes, Joe Blow, let us all gather together in our hearts and minds and remember that day in 1941~ And in the days since then when fellow brothers, sisters, mothers, fathers, have paid the price for us to have the fredom we enjoy today.

If only Americans had been asked to sacrifice and involve themselves for the sake of their country in the wars we have been thrown into the last decade. But, we have no draft, we have no rationing, we have no War Bonds, we just borrow the trillions we have thrown into one war fought for false reasons (Iraq) and one for a will-o-the-wisp, Osama, who is now dead. Meanwhile corporations move their jobs overseas, the rich refuse to pay taxes, thousands of soldiers and vets have killed themselves in despair and the lingering effects of PTSD and severe disablement of thousands more will be with us for a generation. Sorry for the vent, but if we had had an FDR-type leader as president on 9/11 it would be a different world today. And Joe, I guess I am about the same age as your dad, a WWII baby!