I am going to brag for just a minute.  A very dear friend of mine gave me an iPad for my birthday and Christmas.  (Thank you, because I know you are reading this. I have thanked you numerous times for this very generous gift, but it needs repeating so you know how wonderful you are.)  The iPad is absolutely wonderful, and I love it.  One of the apps that I have downloaded is the Gay History Project.
The Gay History Project is the first and only iPhone/iPad app to be solely based on providing LGBT history to its users. It is a global interactive project started in 2009 by John Clevesy in an attempt to spread awareness about LGBT historical figures and events. It also features personal stories by Clevesy and any contributors who wish to share their experiences. Users can also contribute new articles about events as they occur to keep the project constantly growing.
In 2009, John Clevesy (born February 27, 1986 in Lawrence, Massachusetts) received the news that his husband Damien Barnes (born December 24, 1984 in Bristol, United Kingdom) would not be allowed to apply for a green card because of the Defense of Marriage Act (DOMA). Because this Act proclaims that one state does not have to recognize marriages performed in other states, the federal government does not recognize the Clevesy-Barnes union (which took place in Boston, MA, in 2008), nullifying Clevesy as a sponsor for his husband.
Shocked to learn this, Clevesy decided to do something about it. As a student in graphic design at Northeastern University, in Boston, MA, Clevesy decided to focus his senior design project on spreading awareness about gay rights. Having some ties with media already as a photographer in association with Spectrum Literary Art Magazine and featured on websites such as Creative Photography Tips & Videos, he was familiar with mass media. He created an interactive application which features his story along with gay history spanning over four-thousand years of information and color-coded maps displaying where and when different territories from around the world began to create and void laws regarding homosexuals. Clevesy’s project was met with great reception from peers and professors and displayed in Northeastern’s 360 Gallery to be viewed by the public. It has since been published on GayRightsSite.com.
John Clevesy, however, was still not satisfied with the final outcome. Due to time constrictions of the class he was forced to omit a lot of information. He decided it was necessary to create a book which could hold much more information. As of June 2009, this book is still in production but can be preordered on the website.
Realizing that a book has a definite beginning and end, and because he wanted to reach more people, John Clevesy decided to take all of the information that is to be included in his book and create an iPhone App. The application entitled “Gay History Project” shares John’s story along with the articles from his senior project, over a hundred more write-ups, and a section for users to share their stories and news events as they occur around the world from their mobile devise, allowing the Gay History Project to grow as the information grows unendingly. This final outcome of Clevesy’s design project was released on the Apple iTunes App Store on June 23, 2009.
As of June 2009, the Gay History Project features over 150 built-in articles about LGBT events and people from around the world. The articles span over four-thousand years of history and are ordered chronologically. They are divided into nine categories: Ancient Times, The Roman Empire, England & America (1000CE - 1800CE), Life in the 1800s, The early 1900s, Social Revolution (1960-1979CE), The eighties, The nineties, and A new millennium. Clevesy’s personal story is also featured in a separate section entitled “Forward.” Each section contains articles relating to the time-period in which the user has selected along with an article that lists additional events that occurred during that timeframe. The sections relating to periods after the 1700s also include color-coded maps which display information about laws regarding homosexuals in various territories around the world. 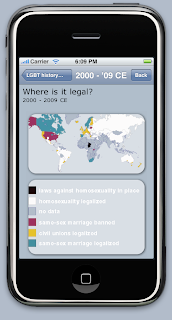 The final section of the Gay History Project is an area in which users can write to inform others about new stories as they occur. This allows the Gay History Project to continue growing indefinitely through time. Because of the iPhone’s portability, news can be posted from anywhere the user has service even as the event is taking place. Users of the Gay History Project are, therefore, kept up to date on news regarding gay, lesbian, bisexual, and transgender people. By allowing the content to continually build and grow, this section allowed Clevesy to achieve the unending expansion of the Gay History Project.
In addition to news about people and events, this last section also includes other areas for users to write in. A person can ask questions to be answered by other users regarding anything informational that they could not find elsewhere. There is also an area for anyone to tell others their own personal stories in order to receive support with their own personal struggles or triumphs.

Joe: You deserve the best. Santa Claus heard your wish and delivered early this year.

Seems very cool, too bad it isn't ported to Android for those of us too poor (and with poor friends, too) who don't have an iPad or iPhone.

Great project, though, and a heck of a way to get the words out there!

thanks prof. Blow,
I am a old mac geek, all the toys, and am pretty tech savy, and have lots of HOhistory sites in my bookmarks, only the best, including yours, and I didn't know about this app which is why everyone should post things like this just in case.
Have a great weekend.
tim