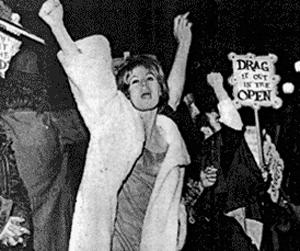 The Compton’s Cafeteria Riot occurred in August 1966 in the Tenderloin district of San Francisco. This incident was the first recorded transgender riot in United States history, preceding the more famous 1969 Stonewall Riots in New York City by three years.

Compton’s Cafeteria was one of a chain of cafeterias, owned by Gene Compton, in San Francisco from the 1940s to the 1970s. The Compton’s at 101 Taylor Street in the Tenderloin was one of the few places where transgender people could congregate publicly in the city, because they were unwelcome in gay bars at that time. Because cross-dressing was illegal, police could use the presence of transgender people in a bar as a pretext for making a raid and closing the bar down. 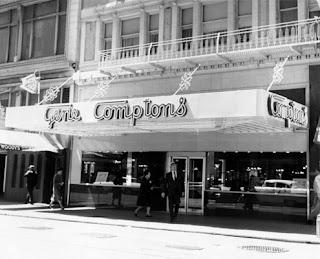 Many of the militant hustlers and street queens involved in the riot were members of Vanguard, the first known gay youth organization in the United States, which had been organized earlier that year with the help of radical ministers working with Glide Memorial Church, a center for progressive social activism in the Tenderloin for many years. A lesbian group of street people was also formed called the Street Orphans.

On the first night of the riot, the management of Compton’s called the police when some transgender customers became raucous. When a police officer accustomed to manhandling the Compton’s clientele attempted to arrest one of the transwomen, she threw her coffee in his face. At that point the riot began, dishes and furniture were thrown, and the restaurant’s plate-glass windows were smashed. Police called for reinforcements as the fighting spilled into the street, where a police car had all its windows broken out and a sidewalk newsstand was burned down. 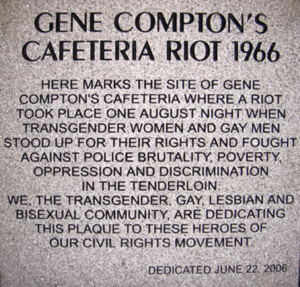 The next night, more transgender people, hustlers, Tenderloin street people, and other members of the LGBT community joined in a picket of the cafeteria, which would not allow transgender people back in. The demonstration ended with the newly installed plate-glass windows being smashed again.

In the aftermath of the riot at Compton’s, a network of transgender social, psychological, and medical support services was established, which culminated in 1968 with the creation of the National Transsexual Counseling Unit, the first such peer-run support and advocacy organization in the world.

Something about which I had heard nothing before today! Thanks!!

Also new to me. Thanks, as always, for the education!