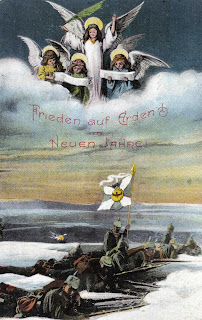 Thank you for all of your responses to my post "I'd Like to Hear Your Opinion on This."  I still tend to think that a Christmas play is by its nature not secular, but the particular play that was being put on is called "The Reindeer Rebellion" and is supposed to be a secular production involving Santa's reindeer going on strike. It happened to include the song "Silent Night."  An update to the story is that after consulting with their attorney, the school system decided to allow the students to perform the traditional Christmas carol.  I had found this interesting because it was in Alabama, which is my home state.  I also have a particular love for the song "Silent Night," and I would like to tell you why and how to me, the song embodies the Christmas Spirit.

During World War I, on and around Christmas Day 1914, the sounds of rifles firing and shells exploding faded in a number of places along the Western Front in favor of holiday celebrations in the trenches and gestures of goodwill between enemies. On December 7, 1914, Pope Benedict XV suggested a temporary hiatus of the war for the celebration of Christmas. Though Germany readily agreed, the other powers refused.

Even without a cessation of war for Christmas, family and friends of the soldiers wanted to make their loved ones' Christmas special. They sent packages filled with letters, warm clothing, food, cigarettes, and medications. Yet what especially made Christmas at the front seem like Christmas were the troves of small Christmas trees. 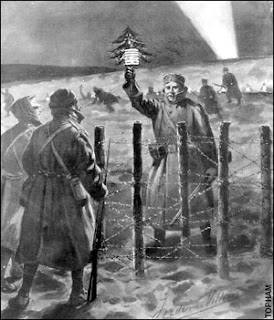 On Christmas Eve, many German soldiers put up Christmas trees, decorated with candles, on the parapets of their trenches. Hundreds of Christmas trees lighted the German trenches and although British soldiers could see the lights, it took them a few minutes to figure out what they were from. Could this be a trick? British soldiers were ordered not to fire but to watch them closely. Instead of trickery, the British soldiers heard many of the Germans celebrating.  They heard songs that were very familiar being sung in the other trenches:


Silent night, holy night
All is calm all is bright
'Round yon virgin Mother and Child
Holy infant so tender and mild
Sleep in heavenly peace
Sleep in heavenly peace
Starting on Christmas Eve, many German and British troops sang Christmas carols to each other across the lines, and at certain points the Allied soldiers even heard brass bands joining the Germans in their joyous singing. 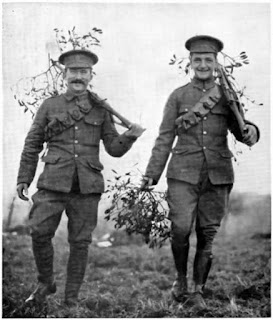 At the first light of dawn on Christmas Day, some German soldiers emerged from their trenches and approached the Allied lines across no-man's-land, calling out "Merry Christmas" in their enemies' native tongues. At first, the Allied soldiers feared it was a trick, but seeing the Germans unarmed they climbed out of their trenches and shook hands with the enemy soldiers. The men exchanged presents of cigarettes and plum puddings and sang carols and songs. There was even a documented case of soldiers from opposing sides playing a good-natured game of soccer.

Some soldiers used this short-lived ceasefire for a more somber task: the retrieval of the bodies of fellow combatants who had fallen within the no-man's land between the lines.

The so-called Christmas Truce of 1914 came only five months after the outbreak of war in Europe and was one of the last examples of the outdated notion of chivalry between enemies in warfare. It was never repeated—future attempts at holiday ceasefires were quashed by officers' threats of disciplinary action—but it served as heartening proof, however brief, that beneath the brutal clash of weapons, the soldiers' essential humanity endured.

During World War I, the soldiers on the Western Front did not expect to celebrate on the battlefield, but even a world war could not destory the Christmas spirit.

The First World War is one of my favorite topics of study. It is so important for much of the history of the twentieth century, even though it is often overlooked. We, the GLBT community, also owe a great deal to the Great War. The First World War traumatised millions of men and challenged hegemonic conceptions of masculinity. In the post-war era, battles raged between competing socio-political groups over masculinity and the war experience. The homosexual movement posed one of the most significant challenges to pre-war gender norms. The war galvanised homosexuals to challenge social and cultural perceptions of gays as degenerate ‘enemies of the nation’. The movement was fragmented by rivalries and theoretical differences, but the memory of the war served as a central reference point for defining homosexual identity, masculinity and political rights in the Weimar Republic. The First World War was a turning point for Germany's homosexual movement, as the war provided a central ideal – comradeship – that became a cornerstone for defining homosexual identity and justifying emancipation. An intensely militarised rhetoric permeated the language of gay rights organisations in the 1920s and, despite the differences among those organisations, the war gave homosexuals similar visions of a spiritually and politically liberated gay man who could use his training at the front to fight legal oppression and cultural prejudice.

Interesting post. I hadn't thought of the cultural effect of WWI on the early gay rights movement.

Nice post Joe from one who also lives in the home state of Alabama. Thanks for sharing!! I'll try to get more into writing again.

Fascinating article. I have heard / read of the Silent Night in Wartime sometimes in the past...Maybe a Reader's Digest, or devotioinal book. Was there a TV Special some years ago at Christmas time? At any rate, a wonderful story. But I had never been made aware of the relationship to the struggle of gay rights. Amazing connection!

And, am glad the shool left in the the Silent Night in the play prodution as well