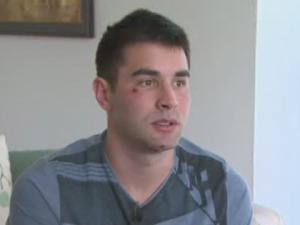 An openly gay Illinois State University student had to have his jaw wired shut after allegedly being beaten by a group of men who shouted homophobic slurs as he was returning home after a party.

The Chicago Sun-Times reports that 23-year-old Eric Unger was walking home when a group of five to eight African-American males passed him from behind, and one of them knocked his cell phone out of his hand. After he asked "what their problem was," Unger says the group attacked him, hurling anti-gay epithets.

"They just wanted to hurt somebody," Unger, a family relations major who hopes to work with LGBT youth, recalled for CBS. "The last thing I remember is just being blindsided by six or eight guys, and then I woke up on the concrete."
Unger reportedly suffered scrapes and bruises around his face, broken teeth, and a fractured jaw. Unger had to have his jaw wired shut for the next four to six weeks, leaving him with limited speech and on a liquid-only diet as he recovers, the Chicago Phoenix is reporting.
At present, the Normal Police Department have not classified the attack as a hate crime. “At this point, that’s part of our investigation,” Chief of Police Rick Bleichner told the Phoenix. “Initially, there was no claim about that. That’s why we are doing the investigation to determine anything further about that."
Unger, however, begs to differ. "I know this is a hate crime, just because of the words that they said and just how they were saying it," he told CBS. "You know, if there was a group of white guys, you know, attacking a black guy, saying [discriminatory] words to him, that would be a hate crime, wouldn’t it?"
SOURCE: Huffington Post, Eric Unger, Gay Illinois State University Student, Claims Brutal Attack Was Hate Crime. 04/25/2012 by
Posted by Joe at 8:00 AM

Email ThisBlogThis!Share to TwitterShare to FacebookShare to Pinterest
Labels: News

These kind of attacks are becoming very troublesome not only because he is gay but because of the Black against White hatred and the beatings that police do not want to investigate thoroughly. Now I have to ask you Joe and the rest of America where is Al Sharpton and Jessie Jackson to condemn those attacks against white? I have said it before and agian, because when you have had an encounter with a wild and angry black who is out for revenge because he interprets EMANCIPATION with I CAN DO ANYTHING I WANT BECAUSE I NOW HAVE FREEDOM. And if you Joe back these people up then you are endorsing violence against your own race. Even Barrack Obama has said that we are living in times where you have to take responsibility for your actions. Also what about the poor white guy who was attacked in the Chicago suburb by two black African Americans because they were upset over what what happened to Trayvon Martin. Both of those two assholes who call themselves activists for equal rights and non violence have both broken their rules and have corrupted the masses. It really is too bad that people are swayed by trash like this. I will never endorse these two people or their followers and am now thinking that one of Lincolns first plans of returning all the blacks to Africa would have given them what they always wanted. Now South Africa, that is a problem for whites that will never go away and Nelson Mandela is no freedom fighter or good man. He has to answer to his maker in a VERY BIG WAY. For now I have spoken my mind and it is not hatred but honesty and that is what AMERICA REALLY NEEDS RIGHT NOW!!!!!!