A War Against LGBT Students? 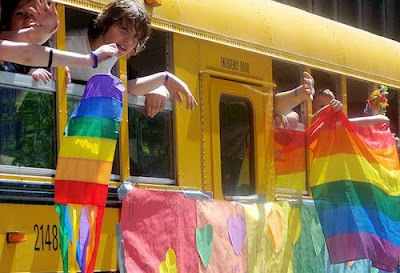 As if adolescence wasn’t already hard enough, LGBT students in Louisiana have a new reason to fear for their existence. State sanctioned bullying of high school students is beyond reprehensible and leave it to Louisiana, such a bastion of cutting edge educational practices (written in the most sarcastic tone that you can muster in your mind), to attempt to make exclusion, discrimination, and bullying a state law. A Louisiana State Senate committee approved legislation Thursday that would allow charter schools to refuse to admit students on the basis of their ability to speak English, their sexual orientation or other factors. I have never been a fan of the idea of charter schools. I think that public schools should learn to use their money more wisely. It's one thing for a child to attend a private school, whether their parents are paying for it or whether they are on an academic or athletic scholarship, but it is something very different for a state to divert funds from public school to private because the state is unable to do their job effectively.  However, if charter schools are going to continue to exist, then they should be held up to a higher standard, as they were created to do.

State Sen. A.G. Crowe, R-Slidell, said his bill is designed to ensure that executive branch agencies and local governments stop including bans on discrimination against characteristics not listed in state law as a condition for private companies to do business with their agencies. Crowe forgets that these are not just any private companies, but companies created to provide a quality education, something that I do not believe can be accomplished without also teaching tolerance. The Louisiana Department of Education contracts with those seeking charter schools were the chief examples cited during testimony for Senate Bill 217. Of course, Louisiana Gov. Bobby Jindal did not respond to requests for comment about calls to unilaterally strip the anti-discriminatory language from the department’s contract criteria. Jindal has a stellar record when it comes to education. A couple of years ago as he was giving a commencement address at a college where a friend of mine works, he promised more funding and showed his excitement over great things he saw in the college's future, while at the same exact moment, he had his secretary send a previously prepared email telling the college that their budget would be cut by 30 percent. 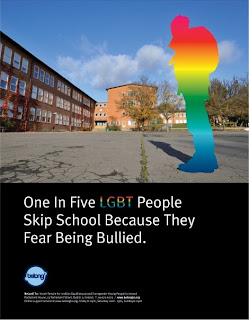 On the other side, state Sen. Ed Murray, the only “no” in the 5-1 vote by the Senate Labor and Industrial Relations committee, said the possibility of SB217 becoming law and negating the anti-discriminatory prohibitions in charter school contracts is “really scary.” Murray said, “I can’t believe that at the same time we as a Legislature are passing bills that expand school choice, that we would also allow charter schools to deny admission based solely on a child’s ability to speak English well enough or play basketball well enough.”

In the breathtakingly simpleton attitude of too many state legislators, Crowe said, “The focus is really simple, it says stick to the law.” State law currently forbids discrimination on the basis of race, religion, national ancestry, age, sex or disability. If the Louisiana Legislature wants to expand that list to specifically protect people from discrimination on the basis of sexual orientation — or anything else — legislators should pass a law, Crowe said.

Randy Trahan, an LSU law professor, testified on Crowe’s behalf that anti-discrimination language that carries the force of law is becoming more and more prevalent in government agency procedures. Only the Legislature has authority to pass laws, he said. Trajan claimed that “The executive branch has gone rogue." One of those executive branch agencies gone rogue is the state Department of Education, he said.

Leslie Ellison, of New Orleans, testified she refused to sign a charter school contract with the state Department of Education because it required her company to promise not to discriminate against gays and others, criteria that are not listed in state law. The Louisiana Department of Education “doesn’t have the right to insert” its own opinions into a state contract, Ellison said. In my opinion, if Leslie Ellison wants to teach discrimination in schools, then she has no business in education. In fact, she should be nowhere near children at all.

The Education Department provision states: “Charter schools may not discriminate on the basis of race, color, national origin, creed, sex, ethnicity, sexual orientation, mental or physical disability, age, ancestry, athletic performance, special need proficiency in the English language or in a foreign language, or academic achievement in admitting students, nor may charter schools set admissions criteria that are intended to discriminate or that have the effect of discriminating on any of these bases.” The purpose of charter schools was to provide a better education and educational environment for children, which is what is in line with what the Louisiana Education Department's charter school provision is meant to provide. If they choose to begin discriminating, then what is the purpose of charter schools in the first place.

Gene Mills, who heads Louisiana Family Forum, said after the hearing that “we’re sending a message” for Jindal to strip the provision from his Education Department’s contract criteria. Louisiana Family Forum is a coalition of religious groups that lobby the legislature on social and other issues. Jindal did not respond Thursday to four requests for comment about the policy. However, Jindal’s press secretary, Frank Collins, wrote in an email, “We’re against discrimination, but we don’t believe in special protections or rights.” once again, Jindal is talking out of both sides of his mouth, contradicting himself and just flat out lying.

State Superintendent of Education John White also did not respond to a request for comment. His spokeswoman, Rene Greer, wrote in an email: “The Department is reviewing the bill in relation to its current charter authorization process.”

Add in the "don't say gay" bill that is back in play in Tennessee, and Virginia's Kookinelli's order to the institutions of higher learning insisting they remove sexual orientation discrimination statements from their anti-discrimination regs because the Legislature didn't "authorize it". Sounds like LA has been listening to this wingnut.
God, it's a terrible time to be a gay kid in the South.