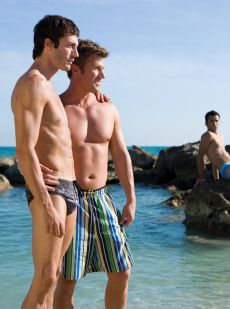 The Conch Republic was established by secession of the Florida Keys from the United States of America, on April 23rd, 1982 in response to a United States Border Patrol Blockade setup on highway U.S.1 at Florida City just to the north of the Florida Keys. This heinous act effectively isolated Keys Citizens from the U.S. mainland since the blockade was on our only land artery to and from the mainland. This roadblock portrayed Keys residents as non-U.S. citizens who had to prove their citizenship in order to drive onto the Florida mainland! Hardly an American thing to do! 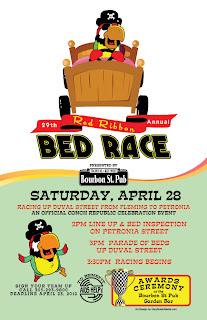 Today, the Conch Republic celebrates its thirtieth birthday. The thirtieth anniversary celebration runs from April 20-29. The gay community of Key West joins in o the celebration with several events at the Bourbon Street Pub. Key West's Great Conch Republic Drag Race wore Saturday. The race featured 16 high-heeled female impersonators navigating across an obstacle course filled with automobile tires and scantily-clad passengers in shopping carts. According to the Florida Keys News Bureau, the race was hosted by the republic's Bourbon Street Pub Complex, where contestants raced down Duval Street, or the fittingly nicknamed "main drag." The wacky drag challenge has been held annually since 1982 as part of Key West's independence celebration. This year's celebration runs through April 29th, filled with other events to look forward to such as a reenactment of the secession, a fun sea battle with tall ships, and an open-air bed race that's said to be "the most fun you can have in bed with your clothes on." 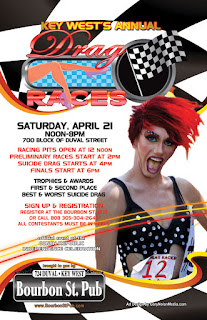 The City of Key West is a menagerie of people from all walks of life. The people of Key West are fortunate to live in a tolerant community that respects and celebrates differences. They have a vibrant gay and lesbian community and Key West has been ranked as one of the "Top Gay and Lesbian Destinations" in the world. This spirit of tolerance is evident everywhere on the Island. Filled with a funky charm, Key West is a sophisticated place with amazing restaurants, diverse entertainment, eclectic art, professional theatre, and live music that includes salsa, show tunes, disco, country, opera, and classical. Key West's gay and lesbian guest houses are legendary, and our mainstream hotels and inns are always All Welcome. Drag shows, commitment ceremonies, water excursions, late night parties, beaches, clothing optional resorts, and the only gay & lesbian historic trolley tour make our island the preeminent LGBT vacation choice. But the best part about our town is our open and accepting attitude. “One Human Family” is our city motto, and our closets are only used for our costumes! 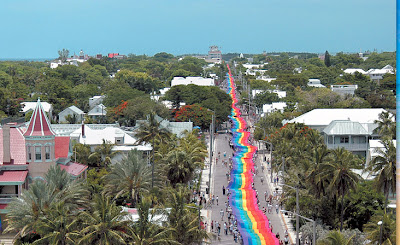 One of these days, I am going to have to visit Key West.  It sounds like a fantastically fun place, and one of my favorite writers, Ernest Hemingway, used to live there. Hemingway lived and wrote in Key West for more than ten years beginning in the 1930s. Calling Key West home, he found solace and great physical challenge in the turquoise waters that surround this tiny island.

I was there in high school with my boy scout troop. LOL Beautiful place. My first taste of Jimmy Buffet life. I remember waking up on a sailboat in the Dry Tortugas and realizing "THIS is why people go to the Carribean in the winter".

I'd go back in a heartbeat.

When I lived in Miami, I visited Key West often. Visit the Hemingway House and see the six-toed cats, which are descendants of Hemingway's six-toed cats.

All of the keys are wonderful from Key Largo all the way down to Key West. The coral reef in Pennecamp State Park is awesome for snorkeling and scuba. They even have glass bottom boats for those who don't want to get their feet wet.

I remember the Conch Republic seceding while I was there.

A good read is Far Tortuga: A Novel by Peter Matthiessen