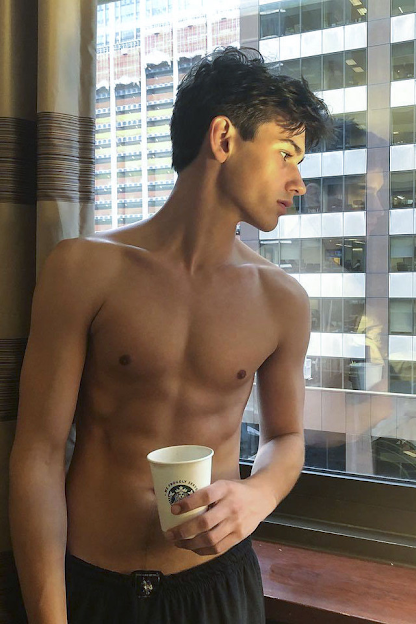 Back when I was teaching college in Alabama, I used to go by Starbucks every Tuesday and Thursday before class and get a venti vanilla latte. I always went to this one particular Starbucks that was not exactly on my way to the university; however, the hottest guy worked in this particular Starbucks. I always went there to flirt with him. I’m pretty sure he was gay. No straight man back then wore designer clothes to work at a Starbucks in Alabama. He has that southern gay boy sense of fashion. He wore designer accessories with his uniform (Gucci belt, designer shoes, etc.) He was really cute—dark hair and eyes, tall and skinny, with a cute little butt that I knew would look fabulous out of his tight-fitting pants. He always seemed so happy to see me when I would go in, more so than many people that come into the café. I’d seen him interact with other customers, and I never saw him wave hello to anyone else or smile when they walked in. He always gave me a big wave, smile big, and say, "Hey man, how's it going?" I was probably imagining that he seemed nicer to me, but I can have my little fantasies occasionally. It probably meant nothing; he just saw me every Tuesday and Thursday afternoon on my way to teach. He was always friendly nonetheless, and if he was able to do so, he always struck up a conversation, though it was mostly about how beautiful the weather was that day. I always just wanted to say, "So, what time do you get off work? I think you are really hot and would love to get to know you better." However, just like now, I was a shy person and would never do that.

He always made the very best vanilla lattes. I know it is a Starbucks after all, and their drinks should usually taste the same no matter which location you bought it, but there was definitely something different about the way he made mine. I miss those vanilla lattes. I never did ask him out or do anything beyond being just mildly flirtatious. Eventually, a new chair took over the history department at the university, and he hired a whole new group of adjuncts to teach the lower level history classes. Since I wasn’t going to teach anymore, I quit going by Starbucks twice a week, and I don’t’ remember ever seeing that guy again. I wonder where he is now.

I know just how you feel! I've always been shy and came out late in life (53 yrs old). Now I'm 65, and if I go to a bar by myself still have a hard time talking to people. Single here as well.

Joe, shyness is a characteristic that we two share. Whether an inability to make small talk, that is chatter about the inconsequential, is an attribute of shyness I don't know but I suffer from that as well. Except that in some cases, I feel at ease with people and can talk - and of course you are one of those people from the moment I first read your blog. Roderick

I too understand this kind of feeling when you encounter such sexy young men and more when they're so gentle and make you feel like the most important man at the same time.

So many stories of me doing the same as you when I meet nice cuties.

But as I'm not very cute man and now old (69yo) no chance to go further with those «pretty» boys.

Moments of grace to keep in our brain and heart but painful moments of desires not fulfilled.

I've gotten free food from men and women before.

I guess for me, it would be the soy or almond. Can't drink milk.

Alternately, the rooibos, or on the way home, chamomile.

Ah, the road not traveled, leaves one wondering what if. Like you and several of your readers that have commented I too am shy or reluctant to make a move most of the time. Considering that I am looking for a boyfriend, doing nothing changes nothing. On that note I have forced myself to be bold and just ask. Here’s a couple of my encounters.

There was a waiter that I really liked and I got to know his shift schedule. I went in and asked to be seated in his section. I ordered, got great service and had a decent meal. When the meal was over, he asked me the infamous question is there anything else I can do for you? To which I replied would you like to grab a bite to eat sometime? He responded no thank you and shook my hand. It really dashed my hopes and was depressing but I had my answer. I had a similar situation in a restaurant that just opened only this time the waiter responded with a yes and took my number. I was elated that he said yes, that was an unexpected response. Waiting for the call that never came, that was heartbreaking. The last story goes pretty much the same way, after I asked about getting a bite to eat the guy said okay. Clearly, he was confused and then said, I don’t understand what you’re asking me. That should have been my clue to just walk away, I was thinking seriously WTF. I told him I was asking him out. He got really loud and screamed his response to the whole restaurant that he wasn’t gay and he was only 17 years old. To which I responded my apologies, you looked older to me. I ran (not walked) out of the place. I was mortified and didn’t bother to go back for a long time. At least he had an interesting story to take home to Mommy & Daddy. I do like younger guys but prefer that they are legal, at least in their mid to late 20’s or early 30’s. At the time this guy looked to be around 25, yeah not the case at all.

Someone told me that it’s good to take chances, I mean you are already at no and the worst thing that they can say is no. I’m not looking for sympathy but to give you some additional insight I lost my spouse of 25 years (6 years ago) and have been thrusted into the dating world which is completely foreign to me. COVID-19 has put a halt to my effort but once it’s all over with I plan to resume my search. I would like a young buff” hunk-o-man “but I have no idea what is in store for me.

Anonymous, I have a terrible time talking to other people when I go to a bar by myself. If I don't have a friend with me or see a person I know, I don't do much talking unless someone talks to me. Several months before the pandemic began, I went to a Burly Bears event in Burlington (while it's mostly geared to bears, it's the only gay men's events regularly held in Vermont). I flirted with the bartender, but nothing came of that. Eventually, a cute University of Vermont student struck up a conversation with me because he like the shirt I was wearing. He was with his boyfriend though. The boyfriend never acknowledged me, but this guy and I talked for 20 or so minutes while his boyfriend was talking to another friend of theres.

Roderick, I am terrible at small talk. I can get over it occasionally, but it's usually in work situations. We had a number of out of town events last year where we took a traveling exhibit to the alumni all over the country. My job at these events was to mingle with the alumni and talk about the museum and the university's history. I did fairly well talking to other people, better than my boss who can be more shy than I am at times. I can be less shy in those situations, but it 's hard when I am trying to flirt with someone at a bar.

JiEL, as you know I am not in the best physical shape. It's the same problem. Gay men often want youth and beauty, and if you are not both, you are often out of luck. Some people get fortunate and still meet the right person, but it hasn't happened to me yet.

Anonymous, I haven't had someone buy me a drink in years.

Jeremy, about a year ago, I went with a coworker of mine to take to a psychic about a program about ghosts at the museum. My coworker is friends with the psychic and has been after me to have a reading for years. I finally gave in and let the psychic do a reading. I am pretty skeptical about these kinds of things. The reading I got did not make much sense as she kept talking about a guy named Patrick, and I knew no one named Patrick. However, later that evening I went with some of my coworkers to a BBQ place in Burlington. It turns out, our waiter was named Patrick. I joked with my coworkers that I should tell him that "My psychic said I should ask you out." I thought it would be a cute icebreaker, but I was not encouraged to do so and I chickened out. I have a lot of missed opportunities in life, but I am starting to try to do better and be bolder.